On this day eight years ago, Marc Vivien Foé collapsed onto the pitch during a match in the Confederations Cup between Cameroon and Columbia.in Lyon. Typically of the big man, he had made it as far as the 72nd minute before hitting the floor.
Foé had been hitting the headlines for Kevin Keegan's swashbuckling side after a loan move from Lyon was arranged for the 2002-03 season. The big Cameroonian with the ear to ear smile was a powerful presence in a flimsy but spectacular side built by Keegan around the creative likes of Robbie Fowler, Ali Benarbia, Eyal Berkovic, Nicola Anelka and Shaun Wright Phillips. Foé appeared to have been Keegan's one desultory nod towards solidity, but in time proved to be a character who fitted the Keegan mould as well as any of the others. We should have known better, really....
He had earlier been part of West Ham's 1999 side that went into Europe and played regularly and with great energy for a multi-champion Lyon and a good Cameroon side thereafter.
Although he only played one season at Maine Road, his performances were always filled with verve and stamina, his incredible lung-busting runs upfield a speciality. His gangly, lop-sided running made him an unlikely danger in the opposition box, but - much like Yaya Touré in the present side - he contributed richly in terms of midfield dominance and goals (9 goals in the 35 games he played for City that season)
Fatefully, it would be his last that would put him into City folklore forever: a clinical finish against Sunderland in a 3-0 home win. It was his second of the game (he had scored twice against Charlton as well in a stirring City comeback at The Valley) . We did not know it at the time, as there were still two home games to be played before the final Maine Road season was put to bed, but a 0-1 reverse to West Ham and a similar score against Southampton meant that Foé became the last ever player to score at Maine Road, as City moved to Eastlands the following summer. 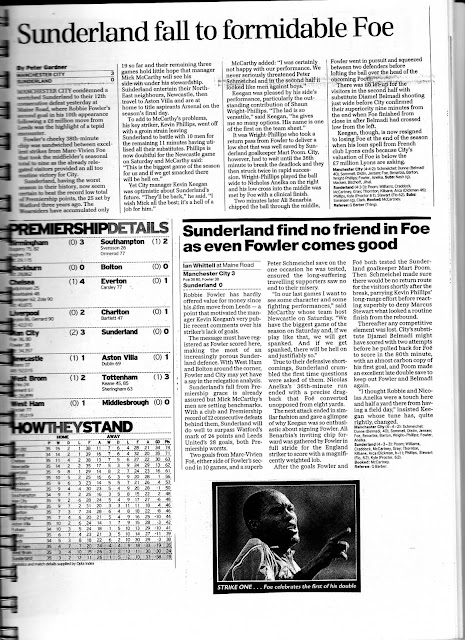 A month later the big man from Cameroon lay dead in the changing rooms at the Stade Gerland. His contribution to that memorable season at City, along with the memories he left with followers of Canon Yaounde, Lens, Lyon, West Ham and Cameroon ensure his name is still writ large in the football pantheon in 2011.
Posted by Simon Curtis at 7:06 AM