The Summer tournaments City participate in these days are far-removed from the home-made marmalade and darned-socks affairs of yesteryear. In 1993 I was lucky enough to be present at the Sittard Summer Tournament in southern Holland, a classy arrangement put together with plywood and elastic bands and helped along by the organisation of a group of truly befuddled Dutch people. At least the beer, the raucous company and the more than marvellous patatje oorlog (chips with mayonnaise, onions and peanut sauce) were top class.

Sittard is a small, deeply unremarkable provincial town in South Holland, very near to the Belgian border. It shares a province with Maastricht but neither the political intrigue nor belle époque architecture of the latter seemed to have reached this far in to grassy Limburg.

Although the town was celebrating 750 years of existence in the summer of 1993, most of its buildings looked strictly 1977. It was to this concrete and breeze block background that the town’s mayor welcomed local rivals PSV Eindhoven plus the international prowess of Sporting Clube de Portugal and Manchester City to play Fortuna Sittard in the town’s commemorative tournament. Arriving on the Friday night, the early impressions would be the same as those we held on leaving two days later. There were three excited fans from Portugal, a hundred or so from Eindhoven (50 miles away), assorted disinterested locals and two thousand loud, proud Mancunians, with beer tentacles twitching dangerously.

City arrived under Peter Reid’s tutelage, having lost in Halsteren and won in a tree-lined park in Apeldoorn against the catchily named AGOVV. For us travelling fans it was a chance to see the newly acquired Alfons Groenendijk in action for the first time, an event that admittedly carried considerably more suspense in anticipation than delight in delivery. We had been told by Reid that he could open tins of peas with his left foot, but not that afore-mentioned tin-opener-left-foot was attached to a leg as brittle and muscle-less as the toothpicks we were removing last night's chips and mayonnaise with.

For the good and startled people of Sittard, the tournament provided an obvious opportunity to see Mancunian male and female glory up close. The main square in Sittard, an unremarkable place decorated with small bars and shops, gradually filled up with Blues fans on the Friday afternoon and, by five o’clock every lamp-post and hotel window had a Union Jack or St George’s flag flying from it. The mood of boisterous good humour was only augmented by the mid Summer heat and the vast quantities of the local white beer Wieckse Witte we were consuming. As the songs wafted into the afternoon air, a baggy-trousered philanthropist shinned his way up the main flagpole with a major part of his backside hanging out for all to see. This was clearly what Sittard had been missing for 750 years and the celebrations could start in earnest.

Next day dawned late for obvious reasons and the ground needed to be found for the early kick offs. De Baandert's facilities were on the threadbare side of sparse, but, attracted by a huge amount of noise, the casual visitor would almost certainly have veered away from the tiny main entrance and headed instead for the minuscule wooden clubhouse, The Little Stadium Café, some metres away from the low-slung stadium across a car park.

There would have been good reason for this and a rich reward awaited those who chugged into its condensation-drenched interior. Inside, it had been entirely taken over by City supporters. Flags hung from every position and the cheery atmosphere in the town centre had now given way to a raucous, spirited rendition of everything from Niall Quinn’s Disco Pants to Joe Mercer’s Aces. Bar staff were being brought in from elsewhere to keep pace with their English visitors. Whilst this was a magnificent sight to behold, the bar owner could be seen rubbing his hands together in a clear and public display of glee.

The highpoint was yet to arrive, however. In a moment of rare perspicacity, the organisers and security staff called for the tournament brass band to halt practising their stuttering rendition of When the Saints Go Matrching In in the stadium car park and come over and accompany the City fans through our own impressive play-list.This had the effect of encouraging both beer drinking and singing to up a notch or two, as we were now accompanied by a fifteen-strong band of teenager girls and pot bellied old men. 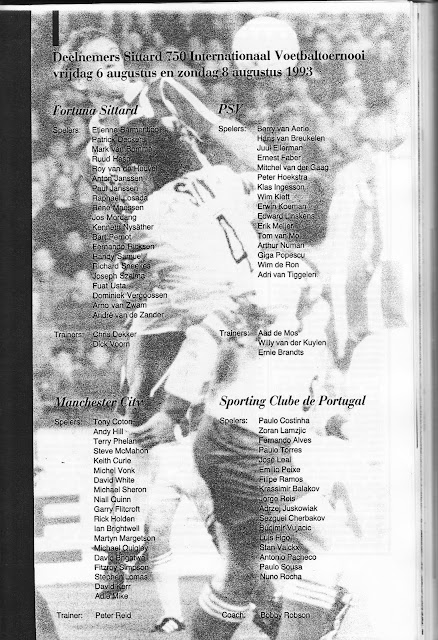 By contrast to the lusty atmosphere in the clubhouse, the tournament started with a timid and error-strewn game between City and PSV, Gary Flitcroft’s equaliser just before half time catching a sizeable portion of the City support - me included - outside queuing for yet more chips and mayonnaise.

For those still in the away end, Klas Ingesson had been dispossessed by Ricky Holden, whose cross Flitcroft met so firmly that Van Breukelen could only parry the ball back to the same player, who buried it unceremoniously. The match petered out into penalties which, thanks to an aberration from Pieter Hoekstra, ended successfully for the Blues.The walk back into town was made unaccompanied by any recognisable brass or wind instruments.

There are a lot of bars on the main square of Sittard and most Blues woke up the next day wondering whether they were still under the influence as the Limburgs Dagblad informed readers that the day’s games would be Sporting v City and Sittard v. PSV, despite the fact that Sporting had lost their game the day before. “The tournament will be played under a league basis”, trumpeted the organisers, despite the fact that there would not be time to play the third games.

So it came to pass that City played and lost to Bobby Robson’s sprightly Sporting (Cadete pouncing on a monumental blunder from Terry Phelan) even though the two sides shouldn't have been playing each other. Even then the organisers, clearly fans of Einstein’s Chaos Theories, were not finished with the City supporters and a penalty shoot-out was deemed necessary (despite City losing 1-0). Confusion reigned as the sun beat down on South Holland. Had we won? What were the penalties for? Why had we drunk so much Wiekse Witte and what had it done to our understanding of the basic rules of Association Football? What exactly was the lass with the big chest and the Ajax tatoos doing? Who had moved our hotel? Did we really have to hug Bobby Robson when he got off the Sporting coach?

PSV later beat the hosts 5-0 and were awarded the trophy. The tournament made a loss owing to the sparse crowds (5,000 over two days and half of those from England) and Peter Reid still had the misfortune of losing some of his squad in Schiphol airport on the way home. It had been a confusing weekend and things would only get worse for Reid, as his time with City ran out after only thirteen days and four win-less games of the new season.

It was clearly a watershed for City, as Brian Horton's arrival heralded the new dawn that we had all waited for so long. Within 6 years City were in the third division playing in grounds not dissimilar in size and comfort to De Bandert and, although many will tell you City's season down with the deadmen was actually one big riotous laugh, nothing that happened at York or Wrexham, Darlington or Wycombe, could compare to the two days spent in southern Holland in 1993.
Posted by Simon Curtis at 2:29 AM