We all remember reading our first Noddy book and thinking "what an alarming bullshitter and man of dubious morals Big Ears is" but here are some more classics which really should have pride of place on any self-respecting City fan's book shelf. 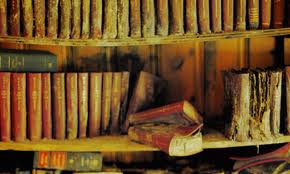 1.  Zen and the Art of First Team Squad Maintenance: Surreal story following our unlikely comic hero, Peters Whale, who finds that his cheque book has a hole in it after a mysterious virus breaks out in his Cuban heels, works its way through his (sparse) body hair and into his jacket pocket, where it weaves itself into his imitation leather wallet melting it in seconds. Whale, noticing that his entire fortune of £27,15 has been eaten by the bug, manfully takes the decision to sell the unsellable Paul Stewart in order to fund his teams scuttling progress towards the second division.
2.  The Lion, The Witch and The Scoreboard: Set in 1980s Manchester, the occupants of a damp yet homely corner of the inner city are treated to afternoons craning their necks to watch the antics of a piece of wildly malfunctioning electronic gadgetry, bought on the cheap from a television mogul with clapped-out hair in Altrincham. All is well until one night, midway through a sporting contest a strange message flashes up: Mnchhhhter Cyyy 1 Ox—ddd 3. Sco-e- Clenncy Clammentts.
3.  Giorgios The Greek Here we have created for our delight one of the great characters of modern fiction. Giorgios, a strapping Greek God with the modern yet mythical powers of being able to seem smaller than he really is, more meek than a Greek and as terrifyingly thrusting as an Aegean bath sponge, arrives in Northern Europe with a brace on his teeth and a band in his hair and proceeds to lay waste to monks, play havoc with traffic wardens and make football supporters everywhere doubt their very ability to stand still and see life for what it is: a mirage.
4.  For Whom The Bell Tolls: Nijinsky is a thoroughbred racehorse going about his classy business when he is cruelly attacked in his prime by a less than noble Scottish butcher, looking to sell illegal sausages to the people of Cowdenbeath. Heart-rending epic of this noble beast’s fight to regain his pride, his fitness and his running power. After a tremendous struggle against the odds, he makes a tentative comeback to the tracks in a Christmas run-out with Newcastle. How will the public react when they see him? What will the sausage butcher say in his defence? Where do we go from here? How many tissues can a grown man get through?
5.  Our Man in the Parkside: Fascinating tale of the work of a humourless yet efficient man boldly doing a job that nobody appreciates. He is there for work every day, does as he’s told and earns only a pittance. he is on the door come rain come shine with only a Pint of Boddingtons as company. It is an existence of searing tedium and mind-altering monotony with a total lack of respect from those he comes into contact with, until finally he gets the chance one dark Wednesday evening to beat a lost Stoke City fan to a complete pulp.
6.  Premiership Down: A group of young rabbits get caught in the forest with their rabbit pants down and, despite the best efforts of Bobtail Tiatto, everyone in the warren catches mixamatosis and dies a really excruciating death. An allegorical thriller for all the family stand to enjoy.
7.  Existentialism and Human Absurdism by Jean Paul Alain Balle: The author tries to imagine what it would be like if one of his acquaintances, an average, red-headed Irishman with strangely unattractive ears and eyes that say "I've sat on a pin", tried to attach himself to a simple stick of wood with a little yellow flag waving from it. Would he still exist as a mere man with nothing between his sticky-out ears? Would he suddenly become a flagpole himself? Or would City simply be relegated as usual?
8.  One Flew Over the Dibble’s Head: Intriguing tale based on a real story, where a hapless Welsh lothario is caught once too often with his pants down and arm up in the air with Gary Crosby heading back to the centre circle, leading to him gaining a reputation as a womaniser and enormous liability. One man’s lonely struggle to clear his name, score in Fridays and keep a clean sheet on Saturdays.

9.  Willy Wonker and the Bog Roll Factory: Children’s story with a dark twist. The owner of the factory appears harmless and friendly at first, but children are taken in by his chuckle brother voice, his page-boy haircut and stripy shirts with white collars only to find that he has tricked them all into buying season tickets to watch a team, which contains a liquorish stick named Alan Kernaghan.
10. Mr Potato Head Has a Wonky Hip: 4th in a series of pre-school learners, following on from Mr Potato Head Goes Up and Down, Mr Potato Head Takes City To Court and Mr Potato Head Makes Fatuous Excuses. Here, tiring of being a figure of fun in a children’s book, Potato gets serious and finally loses both his credibility and his balance, requiring him to lean heavily on Kevin Horlock, when his entire staff jump on him one afternoon in Blackburn. All proceeds to charity.
____________________________________________________________________________
Coming soon: "Paddy Crerand Ha Ha Ha"