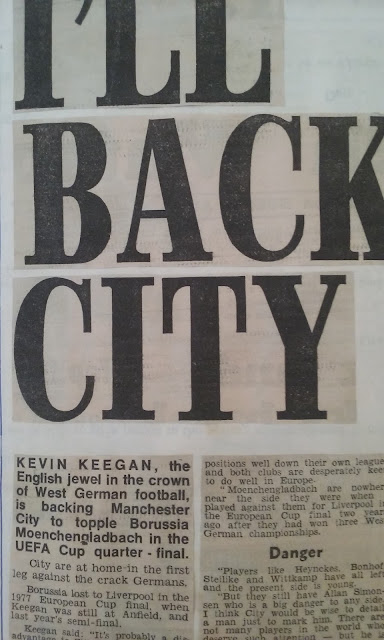 So announced the Daily Express on Friday 19th January, the day after the draw for the last eight for what was then the third of UEFA’s yearly tournaments, the UEFA Cup. To be more precise this was the last era before now that the grand old name of Manchester City was seen spinning around in UEFA’s little glass vases with any kind of regularity. In those days, City’s ex-manager was still the bubble-permed double European Footballer of the Year and City’s opponents were one of the strongest teams in (then West) Germany.

Between then and now both City and Borussia have traversed something of a desert and reemerged dusty and gasping to stride proudly back into the mainstream of European competition. After decades of trauma, they now face each other for the third time in two seasons.
﻿

Back in 1979 - in a cup run that had started to gain real momentum - City had already dealt admirably with FC Twente, Standard Liege and AC Milan, all big European hitters at the time, raising hopes that some glory could still be salvaged from a season which had begun to flop badly. 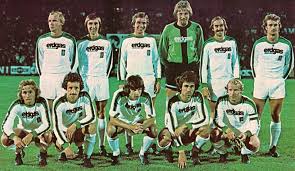 Malcolm Allison’s second coming had proved to be a disaster and the Blues, tipped at the start of the campaign to be in the final shake-up for the title, were well adrift in lower mid-table after a succession of terrible results, particularly at home.

The Germans of Borussia Mönchengladbach were not without their problems either, slowly losing power from the mighty outfit which had dominated the Bundesliga in the early 70s and jousted with Liverpool in UEFA and European Cup finals in recent years (many still remembered with awe Keegan’s last match in a Liverpool shirt as he gave the limpet marking of Borussia stopper Bertie Vogts the test of its powers in Rome on the night Liverpool took the European crown for the first time in 1977).

This was a Borussia side steeped in experience and well used to the glory of winning titles and cups, but one that was coming to the end of a cycle of success under legendary coach Hennes Weisweiler that had seen them punch above their weight for more than a decade. Little were both sides to know how many and how long would be the dark days that were set to follow.
﻿
On the eve of the first leg, to be played at an expectant Maine Road, Malcolm Allison sat on the horns of a dilemma. Midfield powerhouse Gary Owen would be suspended after delivering a wild kung fu kick at Standard's Philippe Garot, who had upended fellow midfielder Asa Hartford in the second leg of the match in Belgium in the 2nd round. Owen, busy fighting other peoples' battles had received a three match ban, missing the two historic matches with AC Milan and the first leg here.

Typical of Allison’s approach in this period, the maverick boss opted to give 18 year-old Nicky Reid a full debut.

As if that were not enough, he would be asked to man-mark the then-footballer of the year Alan Simonsen. Only Big Mal could have come to such a considered conclusion when Colin Bell and Kaziu Deyna, European veterans both, were ready and willing to come in for Owen and shore up the middle of the park. Allison - as was commonly accepted at the time - preferred the bold strokes of the gambler, however, and the raw youngster was chosen to play in City's most important game of the season instead of one of the two midfield internationals who had played a little under 150 times for England and Poland between them. 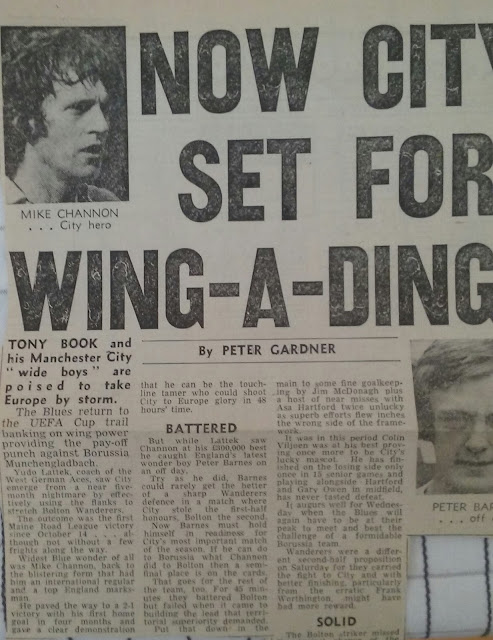 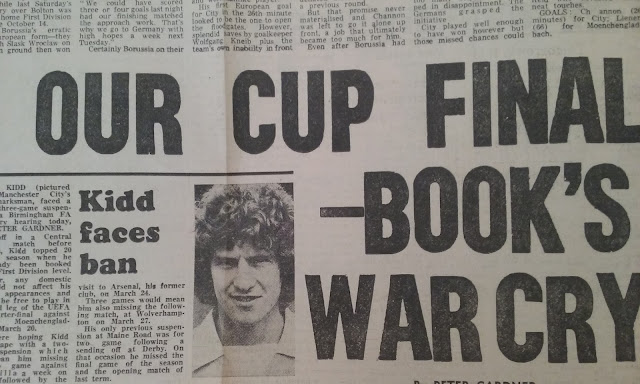 Reid played well enough in the first leg, considering the almighty burden bestowed upon him (Allison would launch 16 year-old Tommy Caton with similar disregard for the youngster’s well-being at the start of the following season), but City struggled to get through a rugged German rearguard, backed by some great keeping from the giant tracksuited Wolfgang Kneib.

Unable to build on the 25th minute lead given to them by Mike Channon, City were pegged back mid-way through the second period, when Simonsen’s trickery on the wing opened up a chance for Ewald Lienen to equalise crisply. The Germans tested Corrigan towards the end with a Sharp shot from Bruns smacking off a post. ﻿For reasons known only to himself, Paul Power then started a multi-player punch-up after a robust challenge on the keeper left players squaring up to each other ominously. By the end, Borussia were not entirely alone being pleased with the 1-1 draw. Allison later commented that “I would not say they were defensive, let’s just say they got all eleven players behind the ball every time we came within 40 yards of their goal!”.

Joint manager Tony Book added, "They were no better than any of the teams we have beaten so far in Europe. It's a long way off being over."
The second leg in front of the towering old cliff-edge terraces of a Bökelberg packed to its 35,000 capacity, saw a gutsy City performance undone by sheer bad luck just before the interval. In those days Borussia's old ground featured a steep seated main stand and three sides of uncovered terracing, where the famous Borussia roar swept down towards the players on the pitch.

With the game ebbing and flowing and little to choose between the sides, Tony Henry sent a screaming shot onto the Borussia post in the 44th minute. The ball cannoned free to some distance from the home goal. Picking up the loose ball, the Germans swept straight up-field and Kulik buried a shot to send his side in at the interval one-up. Allison would later say that “the goal just before half time broke our neck” but in truth City were to take quite a
hammering in the second half, with the Danes Simonsen and Kalle Del’Haye attacking down either flank in mesmerising fashion. 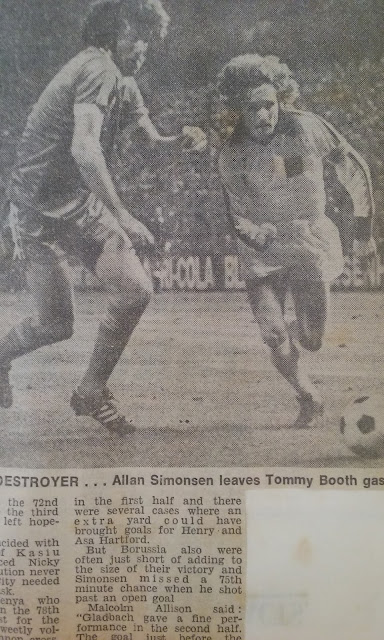 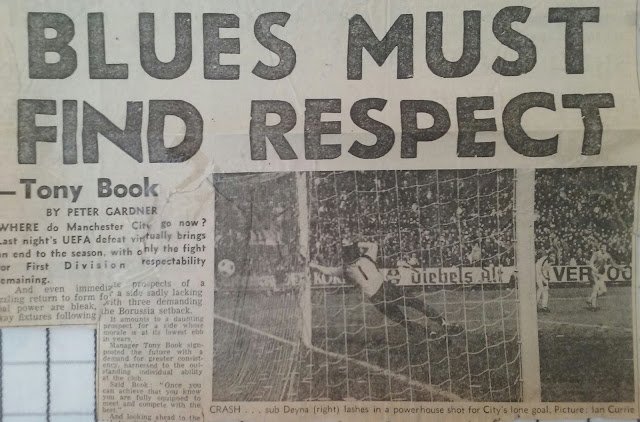 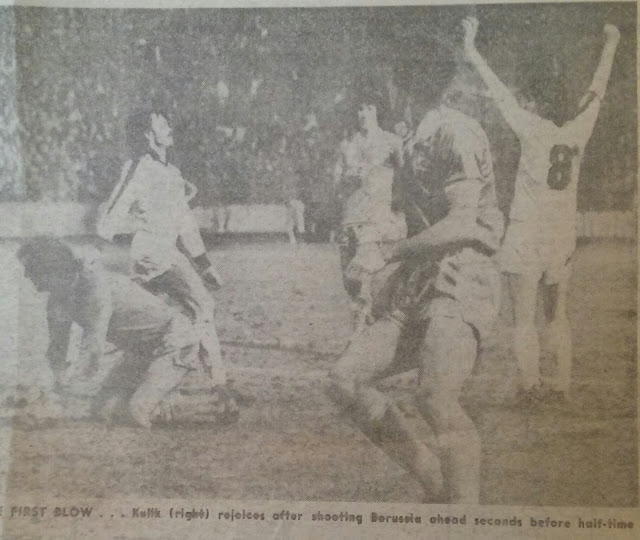 By the 72nd minute City were three goals down, Bruns and the menacing Del’Haye adding to the Germans' total, and heading swiftly for the exit. It had been a titanic struggle but Borussia on this form held just too many aces for the Blues to deal with. Deyna’s belated introduction for the struggling Nicky Reid sparked a revival and his sweetly struck volley from Channon’s pass brought City back into the game. The tie was already won by then, however.
City had been steamrollered in the second half by the all-out attacking wing-play of Udo Lattek’s Borussia, who would go on to win the UEFA Cup that very season against Red Star Belgrade in the final. It was their second UEFA Cup victory of the 70s after the 1975 win over FC Twente and they would reach another in 1980, losing to fellow West Germans Eintracht Frankfurt, the year the last four were all from the Bundesliga. 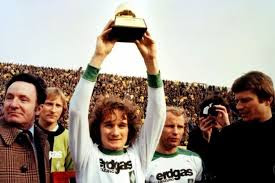 For City, it had been a fantastic journey through to the quarter-finals, illuminating what might have been in an increasingly disappointing season. The 3-2 win over Twente, a blistering 4-0 defeat of Standard and the never-to-be-forgotten games with AC Milan (2-2 in the San Siro, 3-0 at Maine Road on one of those truly unforgettable European nights when the noise cascading down off the Kippax would have woken the dead). This was to be the last season of European glory for the Blues, who went into steady decline from there. Borussia soon followed suit in Germany, disappearing from the top positions for three decades.


Additional reading: Uli Hesse's brilliant description of Gladbach's glory period and how it came to a sudden end. 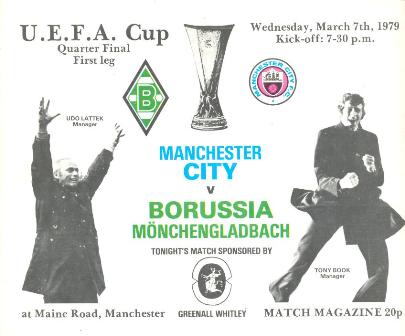 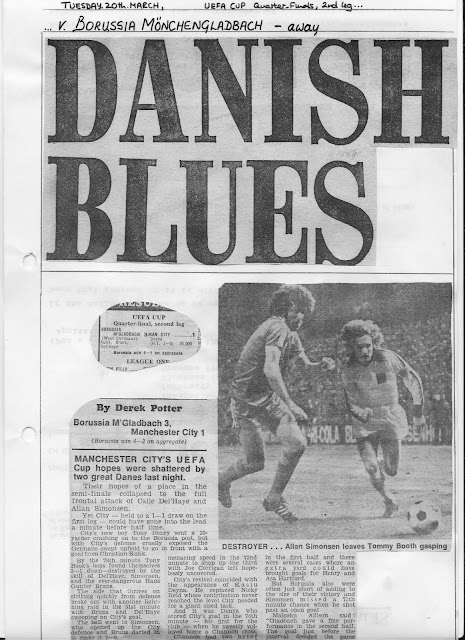 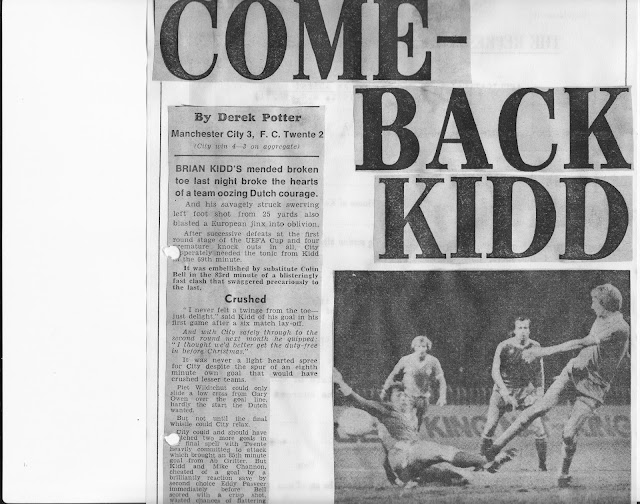 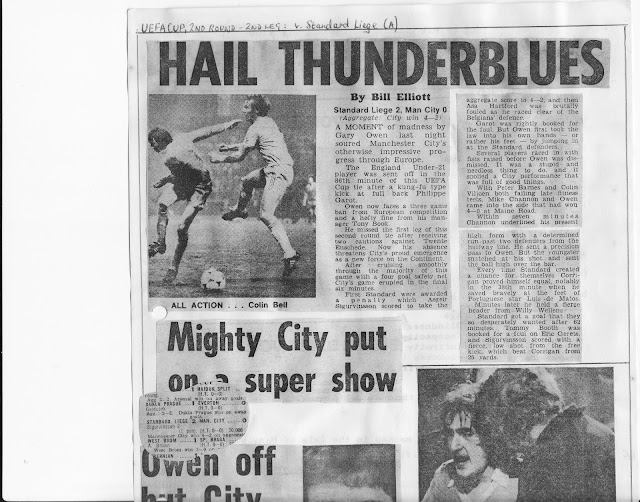 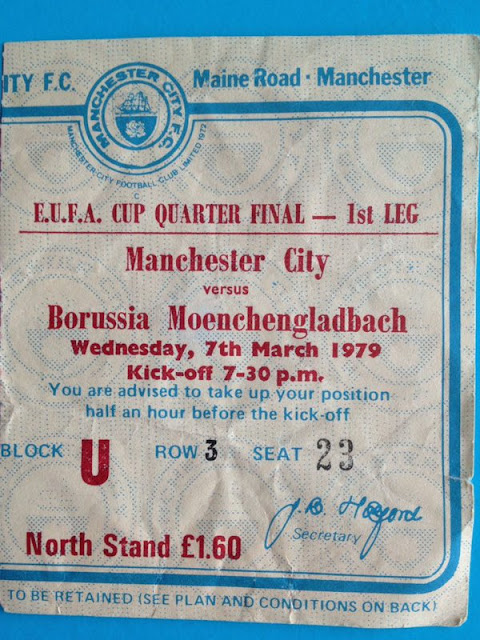