HOW OTHER FOLK SEE US, PART 310
This week's match reflections brought to you entirely via other people's thought processes: 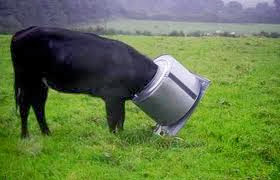 Alex Ferguson, Lord of Govan : "Norwich were a wee bit unlucky, but remained a plucky opponent right up to the end. I thought City were poor defensively and the manager has let himself down completely with the theatre over the keeper. It showed a true lack of class...."

Jamie Cardigan: "It's clear for all to see that City have been going backwards since Roberto Mancini left the club and here was more evidence to pile up with the rest...."

Paul Dacre, editor, Daily Mail: "There was clear evidence that Manchester City, the screaming anarchic wreckers of all that we understand to be good and correct, were about to field a side entirely composed of non-Englishman. Not even a Welshman would play on this day, let alone a Scot. Further evidence of the dissolving of our society's natural pillars of strength...."

Jeff Mound in the Guardian: "Billionaire City wipe their bottoms on the staunch paupers of Norwich...."

Bob Splatter, Mail Staff Reporter: "Hart sensationally dropped again in the cruelest of circumstances. Just when Joe Hart thought his long vigil was over, Chilean tormentor Manuel Pellegrini sensationally told him he had been dropped AGAIN...."

Ted Biscuitbarrel, Daily Telegraph: "Norwich were brought down to earth by two cruel own goals just as they were beginning to take the game by the scruff of the neck...."

Match of the Day expert analysis: "....masterful Manchester United exploded all over Fulham in a display of attacking magnitude not seen since Puskas and Di Stefano ate Eintracht Frankfurt for supper..." ....(....)..... "Norwich City absolutely woeful as they are edged out by Hart-less City...."

Ted Cuttlefish in the carpark, Eccles Asda: "They should win by seven every week, the money they've spent...Just shows, you can't buy class...."

One Flew Over the Cuckoo's Nest analyst Joe Kinnear: "What Man City need is a big guy up front. They've got too many midgets. They should sign that Decko fella.."