sit precariously in 2nd place in the Premier League table. Precarious second places don’t come by very often, but we appear to have one on our hands here, so we must make the most of it.


“It is no shame if City are runners-up. You cannot improve every year”.

Subtle attempts like this to boost personal ratings pre-summer camp are all very well. They allow those of us who have nodded off and not noticed the ugly string of defeats that City have decorated spring with to think all is well in the cookhouse.

Sweaty meetings with your desert paymasters are understandably tricky hurdles to jump, especially when you've overseen something of a damp squib of a season, so it is well worth a quick blast of positivity to see if it works as well as it surely does for our slightly-too-clever politicians.

No shame indeed in 2nd place, Manuel, for we have been in a fair few darker places than that, but let us not climb aboard the bone-shaker to Sincil Bank yet again. Not when the first class sleeper to the Nou Camp is apparently our chosen method of transport these days. No parking the penny farthing against a privet hedge outside Moss Rose anymore for us. It's load up with tapas and bratwursts and break out the Lonely Planet Moscow.


The manager is of course right. Shame takes many shapes but second place in the Premier League is not usually one of them. Not if you support a club whose previous occupants of the fabled hotseat considered 0-6 defeats at Liverpool “entertaining” or believed five months without a home goal to be adequate pay-back for continued support. Shame exists in football in a variety of rude shades, from Alan Pardew’s wicked tongue to people who choose a minute’s silence to abuse Cesc Fabregas for no longer wearing a red and white football shirt. 2nd place is undiluted delight alongside all of this.


No, if there is shame in City’s season, it has nothing to do with 2nd place in the world’s toughest league™ but stems from eleven matches which could and should have been won but were not. The consequences of that will follow Señor Pellergini deep into the desert this summer.


Here they are, in all their chronological beauty. 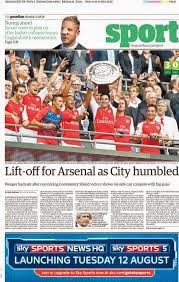 ▐ ► ONE: Sunday 10th August Arsenal, Community Shield – Before we had even sat down to enjoy the start of proceedings, here was one gigantic wake-up call that went unheeded. An admittedly below strength side taken to the cleaners by Arsenal. No redeeming features, no excuses, no way out. This was a horribly lax performance that would be reconstituted in similar form several times in the ensuing months (mainly in the following passages of this article). The game had any number of other tellingly repetitive elements: a haphazard Fernando midfield performance, a defence at sixes and sevens, a depleted Yaya Touré being pulled off after less than 60 minutes, a first and last view of the potentially iconic Bruno Zuculini, the first of scores of weird non-penalty decisions (for Chambers’ brutal check on Jovetic)  and one of the last sightings of Matija Nastasic in the sky blue. □ After match Manuelism: “We played better after the break…”


▐ ► TWO: 31st August Stoke (h) – Stoke, yet to score at the Etihad since their 2008 arrival in the biggest and best league, managed one here in another match that revealed tasty items of what was to come: plenty of tippy tappy and heaps of possession, followed by a big yawning void; Fernando pulling his groin by putting his foot on the ball; everything Yaya touching going into the sky; a whopping hand ball by Wilson in the area ignored by a strolling, loose-faced Lee Mason and an ill-adjusted defence, featuring slow diagonal runs away from the line of the ball by Kolarov and Fernandinho, allowing Diouf to run in from somewhere north of Burslem and slot past Joe Hart. □ After match Manuelism: “We lacked creativity.”


▐ ► THREE: Saturday 25th October West Ham (a) – Having inexplicably thrown away a two goal lead away to CSKA Moscow in the Champions League, City managed to match that generosity at Upton Park against serial lambs to the slaughter West Ham. 70% possession for City, away from home, a wonderful David Silva goal and absolutely no points whatsoever. More patterns developing. Chelsea already opening a clear five point gap at the top of the table with patient, powerful, unspectacular football, but football that ended up with three points at the end of the game. □ After match Manuelism: “Tiredness from the trip to Moscow was not to blame.”


▐ ► FOUR: Wednesday 29th October Newcastle (h) Carling Cup – Another whopping 70% possession (any pennies dropping yet) and a 2-0 reverse to yet another of City’s accustomed whipping boys. Give us West Ham, give us Norwich – if they’re around - give us Villa and give us Newcastle, but not this year thank you very much. Lacklustre and fragile, with Silva crocked after ten minutes, the holders of the Carling Cup departed the tournament early and in a dishevelled state. Just the three trophies to concentrate on now. □ After match Manuelism: “The team tried to run, tried to do things better but we couldn’t because we’re not in good form…” (October, this, remember) 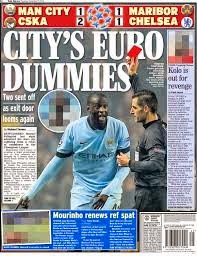 ▐ ► FIVE:  Wednesday 5th November CSKA (h) Champions League – 2 points from the first four Champions League group games meant continental prancing had also been reduced to a hobble at this (early) stage of proceedings. Here we were treated to more shambolic defending, a free header for Doumbia whilst Yaya counted pigeons overhead and a red card for Fernandinho and another one for Yaya Touré’s Muhammad Ali impersonation. All signs of a growing European presence were at this stage hiding behind a very small rock. □ After match Manuelism: “Qualification is not impossible.”


▐ ► SIX: Sunday 28th December Burnley (h) – Mince pies may have been eaten but there were still plenty of turkeys hobbling around at this one, as City threw away a 2-goal lead (becoming a little repetitive, isn’t it?) against an average Burnley side with plenty of energy and enthusiasm and, in Danny Ings, a player who could cause wobbly defences problems. Wobbly defence, did you say? Walk right up! More unprovoked full back rotation, both being swapped, plus an absent Vincent Kompany, crocked again, told more of the season’s narrative before it was half over. □ After match Manuelism: “We still have 57 points to play for.”


▐ ► SEVEN: Saturday 18th January Arsenal (h) – Outplayed and tactically outmanoeuvred by a compact Arsenal side playing to cancel out City instead of going toe-to-toe at tippy tappy, this result revealed two things: that City’s off colour season was no flash in the pan and that Chelsea’s relentless charge was not going to be easy to match with this kind of form. A run of five without defeat went up in smoke on Aguero’s return to duty after 8 games out. Also returning, captain Kompany, who gave away a needless penalty when bringing down Nacho Monreal. 65% possession though. □ After match Manuelism: “A lack of creativity cost us here today.”


▐ ► EIGHT: Saturday 24th January Middlesbrough (h) FA Cup – Here went the second cup possibility, with even less of a whimper than Newcastle and the distant sounds of people exploding on the streets of Manchester. 65% possession (just copy and paste from previous passages) proved absolutely useless as Boro' tore City open on the counter attack. None of this was made any easier by one of the away scorers being a Chelsea loanee (Bamford), City were bamboozled by Boro’s front runners and unable to make any impression at the other end. No Wembley trips this year then but we always had the timely….> □ After match Manuelism: “We got scared.”


▐ ► NINE: Saturday 8th February Hull (h) – City needed a 90th minute equaliser from James Milner to avoid defeat at home to Hull, who – like Burnley – had offered little more than lively resistance and bodies in handy places in handy numbers. 74% possession this time, but let’s not dwell on the uselessness of passing backwards and sideways. Lead at the top stretched to seven points after this one. □ After match Manuelism: “We needed more urgency in the final third.”


▐ ► TEN: Saturday 14th March Burnley (a) – 70% possession for this one. Story of a season underlined one last time by Burnley’s answer to Rivelino, George Boyd, smacking one home when City’s profligate forward line could not find the target. Burnley, almost certainly destined to go down, thus completed a four point haul against the Blues this season. In previous seasons possession has led to goals, cannon fodder has been fired into the blue yonder and City going in front has almost inevitably meant City winning. Not this time, buddy. □ After match Manuelism: "We shall defend our nets, whatever the cost may be, we shall fight them in the centre circle, we shall fight them on the training grounds, we shall fight them on the field and in the penalty areas, we shall fight on the flanks. We shall never surrender."**


▐ ► ELEVEN: Sunday 12th April Manchester United (a) – A game that put the seal on the whole foul-smelling affair of 2014-15. Taken to the cleaners by the club that had, we thought, – with City’s assistance – become a laughing stock. Chasing a club record of 5 consecutive victories against the old foe, City caved in. When Van Gaal had taken over the reins from David Moyes, it had looked set fair for more japes and laughs. Only the last laugh here was on City, as United powered back from a goal down and showed the Blues what fight, determination and organisation can do against eleven supposedly better players. Another lead lost, another bragging post dismantled. City were now 4th, four points behind United. □ After match Manuelism:  “It’s not easy to think there is just one problem. There is a lack of trust in this moment”


All of the elements mentioned above have either fallen away this season in comparison to last (ability to take the lead and hold on to it) or have appeared out of nowhere (extreme defensive frailty). Pellegrini’s Manuelisms (“not too bad”, “quite good”, “not so so bad”, “a little bit lacking here”, “not quite sharp enough there”) may just be attempts to hide the blazingly obvious or the signs of an old man struggling with a new language. A team may occasionally find it difficult to improve every year, although it is not out of the question to see slight chinks of light here and there. To stagnate, which City have done this season, or go backwards, which some will also accuse them of doing, was not on the Abu Dhabi menu. When the Chilean sashays into the Middle East next month, he can expect to be welcomed with the customary politeness and largesse. Once the canapés have been scoffed and the talking starts in earnest, however, it may prove to be as comfortable for him as a sand-infested poncho.