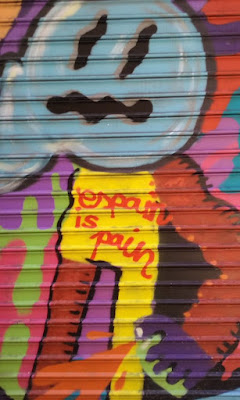 There was noise aplenty, smoke and mirrors and lots besides, but at the end of the day it was curtains for the side built by the delicate hands of Roberto Mancini and turned briefly into a fantasy goal-scoring machine by Manuel Pellegrini. (That was two years and counting ago, mind you).

The first great City side of the modern era is no more.

What a stage, what a place to bring it all to an end. And what an end it was too. Below the hulking, steep-sided cathedral of the Santiago Bernabeu, City’s big hitters finally ran aground. One sole shot on goal in the 88th minute was the total second half effort for a side trying to save its skin in its first ever Champions League semi final. Fernandinho had earlier hit the outside of a first half post, but it was meager gruel on feast night.

Asked to produce one last earth tremor in a season of tumbling bricks, there was nothing left to give. Drifting out of a tournament that had played witness to exhilarating away performances in Monchengladbach, Seville, Kiev and Paris was deemed a stronger idea than throwing caution to the wind and going for broke.

Asked to produce one last ground-shaking performance before he left, the Elephant of Bondoukou ate grass. His rampaging, dust-scattering charges are no more. The majestic old beast rolled slowly but conclusively onto his side, issued a noise like the air escaping from a small party balloon and passed away.

Like all great beasts of the Savannah, his long and comfortable reign over all he surveyed, was finishing in an undignified heap. His demise not to coincide with a triumphant return to the Champions League final stage he bestrode in the colours of Barcelona, but a beaten, exhausted husk, removed from the field in full view of the world.

The curtain that came down on City’s season of European improvement was besmirched and of frankly dubious quality. Threadbare in the middle, see-through in parts, its fabric far from the Italian silks Roberto had bestowed upon us, far even from the early hand-knitted Andean rugs the kind Señor Pellegrini sneaked beneath our acheing feet to start with. This was a mottled quilt with mould and one of Manuel’s half eaten enchiladas underneath.

Still, the way to build enthusiasm and optimism when they are in short supply is to arrive in the great cities of Europe and set about abusing the hospitality. The shisha pipe of life, hot, sweet and bubbly, soon puts you in a frame of mind best described as chilled out.  It was almost as if Yaya had been blowing on the other end. If some were relaxed in the hostelries and tabernas around Sol and Plaza Mayor, down the side streets of Tribunal and the little bistros off Gran Via, our Ivorian powerhouse looked like he’d received a tranquiliser dart to his left flank. 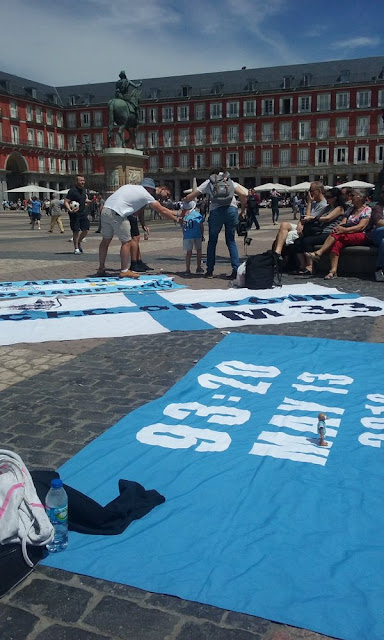 Madrid is a grand old city that carries off the concept of “big” very comfortably. Everywhere you wander there are monuments and convents and squares that are as big as a medium-sized English town. Traipsing the sun-baked Passeo de la Castellana that cuts through the centre of the city like one of the world’s major rivers of concrete, it at no time reminds you even vaguely of a rain lashed Chester Road.

Taxis, resplendent in their Rayo Vallecano home shirts, ply the thoroughfare like their lives depend on it. Women with smoking brown eyes lounge on terraces and draw on cigarettes, while rotund men with slicked back hair shuffle their pastle coloured pullovers into a comfortable knot around their nonchalant latino shoulders. The size and magnificence of Spanish vivacity, virility and vaingloriousness almost makes one understand how Cristiano’s pouting and preening could be misconstrued as a good old fashioned slice of Madrileño bravura, but of course he was like that in Manchester too and he hails from a village on a rock in the Atlantic so there’s no excuse really.

A feature that had been evident by its absence on the last occasion City played in the Spanish capital (hark at this, frequent fliers, we’re here nearly every year now) was beginning to make its early presence felt: organization. Police were relatively civil (they didn’t crack you on the head with a truncheon for daring to drink beer in the open air at least) and a steady flow of Blues were being supplied with their tickets from a well ordered
room in D wing of yet another of Madrid’s colossal office blocks. As I staggered parched past the Plaza de Pablo Ruiz Picasso, an unedifying patch of red brick and cement that did the great man’s memory no favours whatsoever, I was aware that I had at last found something that reminded me properly of the Arndale Centre. Unless of course the joyless patch of tarmac was some kind of horrendous ironic statement that people like me are not supposed to get.

In town, the usual footballs were being punted around the dazzling bright Plaza Mayor, good natured sun bathing and back slapping the order of the day. An odd man in his 40s dressed entirely in black did his best liquid Michael Jackson impersonations and another pretended to be a deer covered in tinsel. Rewarded with a ten euro note Jackson then revolved in the sun checking its authenticity, as if scarcely credulous that someone could be drunk enough to reward him for his bandy-legged cavorting. It was developing into one of those kinds of days. Two blocks west in the superbly ornate Mercado de San Miguel, plates of oysters, olives stuffed with anchovies, freshly frittered calamares and the omnipresent blocks of tortilla were being washed down with smooth as silk Rioja.

With the sun dropping over the skyline, the trek up the Paseo de la Castellana began. By now a heaving mess of excited traffic, our Atletico supporting taxi driver wished us well against his sworn enemy. As it turned out, our wine-fuelled promises of sticking it to them would turn out to be grossly over-optimistic. Still, there’s nothing quite as historically relevant if you have followed City from the Cowards of Europe speech through to the present day to turn up boiling with intent and leave with your trousers around your ankles.

The traffic was so intense at the Plaza San Juan de la Cruz, there was no option but to hop out and walk the rest, aware that the normally sedate hordes of Real fans were a little more than emocianados for the occasion. Swerving into one last café before the ground, the tv showed pictures of a flare wielding crowd welcoming the team bus as it edged through the scrum. Throaty roars of City City The Best Team in the Land and All The World drifted up through the smoke and fire crackers. So, this is what Champions League semi finals are like.

A tingling vortex of noise and expectation carried us on through the ranks of nervous Madrid police and up the great spirals of Bernabeu Fondo Norte. The view from the top is exceptional, a great steep twist of tightly packed seats curving round in a majestic arc. This the scene of daring deeds from Butragueño to Zidane, Di Stefano to Redondo, Camacho to Juanito, Figo to Hugo Sanchez, the Galloping Major and Ivan Zamorano and on through Steve MacManaman to tonight’s solid dose of Fernando.

For several of Fernando’s mates out on the big Bernabeu stage it is be their last proper call to arms in a City shirt. The bell has been tolling for months.

We did not have to wait long before our first dollop of Cityitis arrived in the shape of captain Kompany's eight minute cameo coming to a sudden and familiar end. The team that struggles without him, the player that struggles with them. It was like a plot line from early Mr Ben. Off Kompany hobbled behind the magic curtain, reappearing in the muscle-bound form of Eliaquim Mangala. Now for some fun and games.

Ten minutes later the ball, billowing in a strange arc off the stretching form of Fernando, drifts high and wide of Joe Hart and into the top corner. A burst of noise from the Madrileños, the like of which we hadn’t heard in Barcelona, sharp, raucous and triumphant, splitting the hot night air with a whip-crack.

City’s reaction is more passing across the newly formed back four. More dinks into Fernando and back to Otamendi again. More little scraped passes aimed at Sagna and Clichy but going straight into touch. Aguero, lost in the distant fog of City’s forward positions, is not getting a touch, as De Bruyne, the ginger savior, appears paralysed with fear of the big occasion. Pepe and Ramos growl from the back and, as they had done a week earlier in Manchester, look frighteningly solid, compact and aware of what they need to keep on doing.

City are playing to strange orders. The team that has delighted in passing the whole world to sleep in the Premier League this season is suddenly painfully incapable of holding onto the ball for more than three contacts. Real and their crowd are growing into their role of unassailable favourites, untouchable aristocrats, as City wither back into their traditional scruffy Moss Side chancer outfits.

Kroos and Modric, at ease with the ball, stroke it around, while De Bruyne stutters and chases, flips and flaps. Toure, slowing even from his first half dawdle, is whipped off in ignominious fashion, followed shortly after by Navas, suffering from tunnel vision.

Gareth Bale, later to be chosen as Marca’s “el Dandy” and the strutting, half fit Cristiano, keep City fully occupied. Pepe at the back can hardly believe his luck. The English scrappers have come in their carpet slippers.

And so it all peters out. Aguero fires one over with two to go. City’s magnificent support, trying to suck the team and the ball towards the goal, rock the old ground with songs of encouragement, but the players don’t want it, cannot find it, daren’t risk it. Instead of the barnstorming finish we all desire, to go out with a defiant bang, all guns blazing, City are pushed back for 4 minutes of injury time spent defending. Pellegrini’s reign, intent on ending on the most imperceptible of light notes, will have no trumpet blast. The City end, falling silent in the grim realization that the team is spent, watch the home fans celebrate their second local derby final in three years.

Manuel’s brain trust ran out of ideas months ago. Despite the League Cup win, this is the end of a second consecutive season of considerable underachievement. It is surely a mark of where City have now arrived that a season involving this ground-breaking semifinal in Europe and a fourth-ever league Cup win leaves many feeling distinctly underwhelmed. After Madrid, the incoming Pep will suddenly be aware that the initial reorganization job needs to be a touch more profound than at first thought. For Pellegrini, who has made his name from swashbuckling campaigns with Villareal and Malaga, it is lights out on a feeble exit. Memories of that first scintillating season of attacking football seem distant now. The first great City side of the modern era is over. The team that Roberto Mancini assembled, that Pellegrini took on for a while, has stalled and halted.

As we prepare to look down on the likes of Yaya and Vincent, Kolarov and Zabaleta, David Silva and Clichy for perhaps the last time, it is difficult not to feel a deep pang of sadness. They have formed the basis of the best City team in living memory and now, in the shadow of the great Bernabeu, we must take our leave of them.