THE FLIGHT OF ICARUS 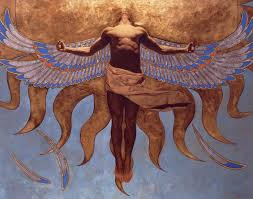 There had been severe doubts in many quarters about City’s ability to stage an apt Premier League coronation after the gross mishap in midweek when they had shot their Champions League feet off with the ceremonial cannons, but this, ladies and gentlemen, was the real deal once again. 45 minutes more and the party could be launched in earnest.


With a rich history of urinating on their own party bonfires, they came in their masses to witness one thing or another: the feast of Steven or another raging embarrassment and damp squib.
The first British winners of a European and domestic double had done so in the teeming rain of the Prater Stadium with the whole nation watching Chelsea v Leeds in the FA Cup final replay instead. Big Mal’s boy wonders had gone out of the FA Cup in the quagmire of Halifax. Alan Ball’s football genius tactics had brought Steve Lomas to the corner flag to time waste when City needed another goal v Liverpool to stave off relegation. Third division play off glory had been rescued from the biggest wreck of all against Gillingham. FA Cup delight at Spurs had only come after going down to ten men and dropping three goals behind. The first Premier League trophy in 2012 had been hauled in with the small matter of two goals in injury time to thwart United. I could go on but the walls are closing in on me.


So here we were confronted by that self-same United, the behemoth of old, grown wrinkly and slow moving under the stop-and-swivel tactics of Jose Mourinho. Still second though, still grumbling and growling, still hauling its hunking weight across the pitches of England with the whiff of ancient authority. The ghost of Alex Ferguson still haunts the fields of the Premier League and the not-in-my-lifetime irreverence still sends a shiver down many spines. Drawn to the fight as ace party poopers may have been an oddly reduced role for United to play, but here they still were, standing tall and ready for the off.
By half time it was clear we were watching the effervescent, sweet-smelling City that we had all been hoping for. David Silva’s little pirouettes were working smoothly, the no-number-nine policy was causing havoc with Raheem Sterling and Bernardo Silva alternating as the most advanced and Captain Vinnie had decided to dust down his raging bull impersonation.


The only thing missing from the whole glossy show was Raheem’s pocket compass.


Under the half time arc lights all had seemed so well. United, cowed and miserable, two goals down but a whisker from a five-goal drubbing, were making Ferguson wriggle grim-faced in the comfy seats. David Gill sat alongside looking for all the world like the man who had sat on a pin cushion.


Then a strange but remarkably comforting thing happened.
Despite all the money, the glistening new stadium with its towering stands and the immaculately dressed über-coach, City, dear old City, reverted to type. The ghosts of the Shay, of Romark, the bog-eyed soothsayer who put a spell on Malcolm Allison, of Alan Ball’s corner flag routine, of Raddy Antic, of City’s late 90s in-house Manager of the Month award and the grating sound of a thousand giggling adversaries came back all at once.


United, flat, horrible and defeated, suddenly perked up. Paul Pogba, the inevitable target of Pep’s first attempt at Mourinhou-esque mind games in the build up to the game, also sputtered into life. It all seemed so natural, so inevitable, as one goal became two and two became three.
Towering Vinny and the whirling dervish Otamendi stood like pillars of salt as United carved their way through. Raheem stood and pondered his three clear misses, then added another for good measure as the game stuttered towards its cataclysmic end. Gabriel Jesus, mindful of his no-show at Anfield last week, entered the fray with a bee in his bonnet and was booked for swinging his legs at anyone that came near him. Kevin de Bruyne and Sergio Aguero, wrapped up in cotton wool for Liverpool, were suddenly out there too, a moving breathing admission from the coach that events had overtaken him.


Even the referee, the learned Mr Martin Atkinson of Drighlington, added some light shading of his own to this drastic tableau of ever-darkening colours, waving away penalty appeals after Ashley Young had demolished Aguero in the box.  By the end, all light had faded. We were spiralling back down into old familiar territory. All those voices of approval that have talked up City’s wonderful passing game all season were suddenly guffawing again, just like in the olden days.
But, as the lights went out on the party that never was, you couldn’t help wondering what this contrary old beast had in store for us all next Tuesday and, whatever it was, would we be able to stand it?

Posted by Simon Curtis at 2:41 PM No comments: Links to this post 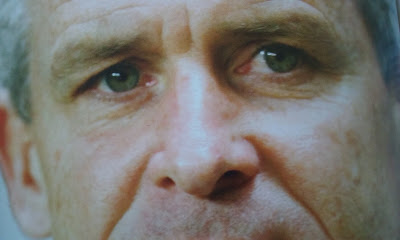 When Alex Ferguson uttered his immortal reply to the question put to him by a reporter, to wit “do you think Manchester United will ever go into a Manchester derby match as underdogs?” his reply was widely greeted with mirth and knowing nods of the head.
The old sage had spoken again and the club he had disparagingly named the noisy neighbours had been put firmly back in their place.


Ian Herbert in the Independent even went so far as to call his response “a perfect piece of theatre”, as the United manager exhibited his certainty for all to see.


The gushing did not stop there: "For fully 15 seconds he eyed his inquisitor, a glint in those narrow eyes, and you wondered whether that individual would be on the receiving end of the full force of his opinion. "What time is it?" he said, at last. "I think it is time for me to leave..... Not in my lifetime."
It was fair to say that Ferguson had by this time of his career large sections of the press easting out of the palm of his hand.
The year was 2009 and, nine short years later, it is clear for all to see which of the Manchester giants has swept enthusiastically to the forefront. City – one victory away from securing their third league title in seven years – will do just that if they defeat -- of all teams – Manchester United next weekend.


For United it is the nightmare scenario that was introduced as a possibility some weeks ago and has since then been inching towards reality as inescapably as a landslide making its way down a heavily drenched hillside.


City’s usurping of United’s top dog status is not all, however. There is another very realistic scenario that could heap even more humiliation on their neighbours: this game of the century, this utterly unique opportunity to grab the limelight even more forcibly whilst playing the local rivals is not even top of City’s list of priorities in this week of vital Champions League action.


Not only have City overtaken their neighbours and consolidated that position of superiority, they are now in a position to state without fear of being contradicted that two games against – of all people – Liverpool, are now more important than closing out the title against United.
Ferguson, you imagine, would not have been alone in finding it tough to imagine such a scenario.


Liverpool it was who – on the occasion of the afore-mentioned press conference – the United manager had quoted as his club’s fiercest rival. Now, the shoe appears to be on the other foot.
City, planning meticulously for the trip to Anfield in the first leg of the Champions League quarterfinal, may well decide that it is worth playing reserves and kids against United at the weekend to spare the legs of the likes of David Slva, Kevin de Bruyne and Fernandinho for the second leg against Liverpool a week hence.


“History” was the one word reason Ferguson gave for naming the Liverpool rivalry as the most relevant and indeed, on a European front, history also conjures some wonderful Anfield nights of raw passion and drama. From Monchengladbach through Benfica to St Etienne, Liverpool fans have witnessed some stunning nights of European drama down the years.
Now it is an equally memorable European tie v Brian Clough's Nottingham Forest that City would like to emulate, one of the few in the 70s and 80s that turned and hit Liverpool square in the chops.
It is nearly 30 years since the last of Liverpool’s league titles, however, and sporadic European success since then has also begun to fade into the memory. City, the first English side to be European and domestic winners in the same season (1970), represent what comes next as well as what has been.


In the infamous press conference alluded to at the beginning of this article, Mark Hughes – then in charge of City – also had his say, once Ferguson's dominance of the podium was over. The Welshman, far from looking back and citing historical importance, revelled in future hierarchies. “For far too long the Top Six has been set in stone and we are trying to change that” was the crux of his offering.


Nobody can doubt that City have --in the space of nine short years -- certainly achieved that.
In breaking up the cartel that ruled the Premier League roost for more than a decade, City have opened up the top four race into a much more competitive affair that has greater ability to provide surprises. Liverpool, United and now Arsenal – a club seemingly permanently lodged in the top four places for two decades – are experiencing what it is like to be on the outside looking in.


Now it is City that possess the longest unbroken run of appearances in the Top Four (that 2009 season was the last time they finished lower than 4th). Since then Roberto Mancini, Manuel Pellegrini and now Pep Guardiola have brought the ship home in 3rd, 1st, 2nd, 1st, 2nd, 4th and 3rd. A third 1st place will be added this weekend if City can fend off United over 90 minutes in what promises to be a scorching Etihad atmosphere.


Before that, however, is the small matter of Liverpool away in the Champions League. Scorching atmosphere, we are promised, will be an understatement for what the teams will come out to at Anfield. You get the impression the City players will relish it and will also relish the opportunity to prove that the 4-3 reverse there in the league was an aberration in a season of silky smooth progress to the top.


After all, not in our lifetime have we seen a Premier League side do the things City have done this season.


This is a longer version of the article that first appeared on the pages of ESPN's website.


Posted by Simon Curtis at 2:41 PM No comments: Links to this post