THE POWER AND THE GLORY 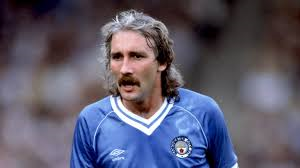 Just how the sight of Kevin de Bruyne's strutting one touch pass routine can make one think of Gerry Gow might be a mystery to those, who remember the craggy, knock-kneed City threshing machine of the 1981 FA Cup run. Gow, with his shirt hanging limply over his unremarkable hips and a bubble perm as ragged as his thigh-high tackling, was a master of the mean midfield swamps of the 70s and early 80s. Those slender hips supported a pair of spindly-looking legs that you felt might not resist a collision with a pensioners shopping trolley down at Tescos on a busy Sunday. How wrong appearances can be. Gow was a one man wrecking machine, whose legs were quite tough enough to carve coloured patches all over the likes of Osvaldo Ardiles, Mick Mills, Kevin Bond and anyone else who came into reach during that 81 Cup run. And that included Trevor Ross and a clutch of white legged chuffers wearing the royal blue of Everton too.

With pre-match thoughts flickering back to those epic days of noise and danger, a little-changed Goodison Park provided arriving supporters with plenty of nostalgia for a past, which in City's case, seems more distant with every gold-leaf pass off the boot of today's swaggering stars.

City's midfield on that January afternoon had featured the willing running of Paul Power, destined for better times with Everton later in his career, the honest running of Steve Mackenzie and Gow's Jurassic Park tackling.

In their unimaginably sleek peach and yellow outfits, today's City looked like a set of well licked lollypops at certain points of an uncomfortable day out at Goodison Park. With the home side unexpectedly finding some claws after a dismal, soft-touch run of defeats in the Premier League, we were made to revisit the old untidy days of maulings from David Moyes' well-psyched shock troops, a regular embarrassment in these parts not so long ago.


But, the Norwich defeat has taught City a lesson or two. Despite forced defensive reorganisation, there is a new purpose to City's performances, as seen in precision-fed defeats of Watford (8-0), Shakhtar Donetsk (3-0) and Preston North End (3-0) in the space of less than two weeks. The way City started, controlled and purposeful, another simple win rapidly seemed tangible.

The opening goal, yet another thing of beauty in a succession of weekly treats, saw Riyad Mahrez skip down the right flank untroubled by the flailing attentions of Lucas Digne. As the Algerian flier checked back inside, he laid off a simple short pass to the supporting Kevin de Bruyne. The Belgian's response to this gently rolled pass was as predictable as a dog barking at a cat. The Belgian hit one of his uniquely swirling outswingers, which are near-on impossible to defend. The ball duly arced in front of the flapping dinosaur arms of Jason Pickford and his wrong-footed defensive line, allowing Gabriel Jesus to throw himself into the inviting space. The Brazilian was horizontal by the time his head met the ball, providing a pleasantly aesthetic finish to a lightning move.

Geometry and geology entwined. Precision holes sliced into the heart of Everton's defence. All seemed set fair, but City again failed to take chances, gradually backed off and Everton accepted the invitation to be part of the contest. Gundogan had already managed to find the bar from Mahrez's outrageous cross when standing practically underneath it and more chances came and went before the home side were level.

Many will blame City's makeshift defence and it never really looked completely settled once Everton had rallied, but in truth Nicolas Otamendi and Fernandinho has so far not been the nail-chewing affair it might have been. The Brazilian has slotted seamlessly into the hole left by Aymeric Laporte and, despite brickbats and guffaws at his wayward style, his South American colleague has performed admirably enough too.

Fernandinho's block tackle may have squirmed to Seamus Coleman to offer the Irishman a chance to chip delicately over Ederson, but he had been coping comfortably enough with the in-form Dominic Calvert Lewin up to that point.

If Gundogan's hitting of the bar had raised eyebrows, heads were being scratched again when Raheem Sterling, enduring one of those days at the office where you begin the day by splashing coffee over yourself, break the printer mid-morning and make a joke about your manager's creeping body odour when he's standing just behind you in the canteen, managed to tap wide when put clean through on Pickford.

Everton had not bargained for Mahrez, however. None of us had until quite recently. Brought in from Leicester to make a difference to a squad that did not obviously require a difference being made, his task has been especially difficult over the last twelve months. Perhaps the pressure finally lifted with that glorious shimmy and strike at Brighton on the day that the title was confirmed last May; perhaps it came in captaining his country to AFCON success in the summer, but - whatever and whenever - Mahrez has transformed himself into a big player at City, one that makes a difference in games like this. Up he stepped to slot an immaculate left foot freekick past Delph's lunging foot and Pickford's outstretched finger tips.

City were back on top. How many times have opponents cast a glance at the subs' bench and shaken their heads? On this occasion, Guardiola summoned Sergio Aguero, then David Silva, then Bernardo Silva, looking relieved to be out on a football pitch, rather than enduring yet more days in the
limelight of Britain's hair-trigger PC culture (Sky's "match analysis" would quickly force back into the zone). As Everton withered, City stood up once more, with Sterling finally finding reward for sticking at it when every touch in his second half had seemed doomed.

Outstanding contributions along the way had been posted by Ederson, proving to all watching that there is an elastic shot stopper and brilliant reaction keeper if you look beyond those delicate foot skills, by Rodrigo, once again dominating the tight spaces in the hectic area of the pitch where friend meets foe and by the fleet-footed flier Mahrez.

Once again, City had been tested and had found the answers. Goals of beautiful precision had once more decorated the performance. Modern day City can do this. The mind floated back once more to that Cup un of 1981, when Power's dinked equaliser had prevented an exit at Goodison and the same player had floated a fantastic freekick at Villa Park in the semi final to dispose of favourites Ipswich Town. The replay of the final had also seen Mackenzie crash in a volley so straight and so sweetly hit that, had the net behind Milija Aleksik not stopped its progress, it would almost certainly have embedded itself in one of the old ground's roof supports. Reminders if they were needed that this endearing old club was producing things of beauty long before the Guardiola production line opened up, just not with such unerring regularity.