PETROBOLLOCKS TO THE LOT OF YOU 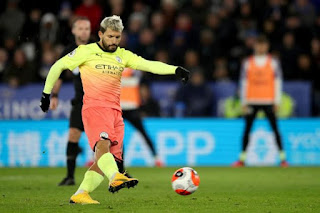 Well, I was going to jot down my thoughts on the dilemma facing Manchester City fans, but sixteen bright young men beat me to that one this week.

Then I thought I might hitch hike to a United game in Belgium and interview a handful of inebriated and overexcited fans to see what they think of the City situation, but Andy Mitten and The Athletic had that "extremely sound idea" ahead of me too.

And before you sympathise and admit that "there is nothing left to write about", a last minute flash of an idea reached me. The football. Let's try talking about that!

It is a long shot, but it might just work.

Leicester away in these dark days is no longer the relaxed formality it was. With the poet from Carnlough leading the way, they have become a fast-moving, slippery character and look well set for next season's Champions League. Which is more than can be said for some.

City, on the other hand, have become so slippery, they cannot even shake hands with the opposition captain without producing sportswash bubbles.

A great deal has been written in the past about siege mentality and its positive repercussions. Jose Mourinho, demonstrating on a weekly basis that he is clearly a man out of his time, made heavy use of it at Chelsea and Inter, where his us against them philosophy produced difficult to beat sides. A predecessor of his at the San Siro, Helenio Herrera, produced catenaccio and a mentality of durability that probably precedes this idea. Meanwhile Mourinho's present day Tottenham play like a team shorn of the panache and style of the Pochettino era, playing percentages and hoping for the best. Against Chelsea, they were undressed and had their clothes burnt in front of them.

City went to Leicester an hour or so later, expecting a severe examination. Compared to the forensic one delivered by all arms of the press over the last ten days, a football examination must have seemed like a breath of fresh air.

And how they took to it. In tricky circumstances, they showed a resolute will-to-survive that had hitherto been hiding under a bush.

With De Bruyne tireless and the touch and thrust of Mendy and Mahrez creating space and danger, they prevailed. The pencil thin Algerian, with a pass that was 90% caresse, slid Gabriel Jesus through for a winner that was celebrated with more than the usual gusto. The way Mahrez makes contact with the ball, you are moved to wonder if he is not having an affair with it, so gentle is the first contact, so attentive the ones that follow.

If City are going down with a billion in the bank, they will go down kicking and screaming and playing their special brand of slide-rule football that has so thrilled us all over the last three and a half seasons.

With a trip to Madrid next, this win was of special significance, not only opening up a decent gap to third place, but setting all the right precedents for the sort of performance that will be necessary against Team Tebas.

If City are to survive that next grand test of their mettle, they might like to look at a penalty record that now reads 5 missed out of seven this season. Like other newsworthy diseases, it appears penalty missing is also contagious.

Email ThisBlogThis!Share to TwitterShare to FacebookShare to Pinterest
Labels: Gabriel Jesus, Going Down With a Billion in the Bank, Leicester, Manchester City, Riyad Mahrez, Rodgers