Number one in a series comparing the best players in the history of Manchester City. 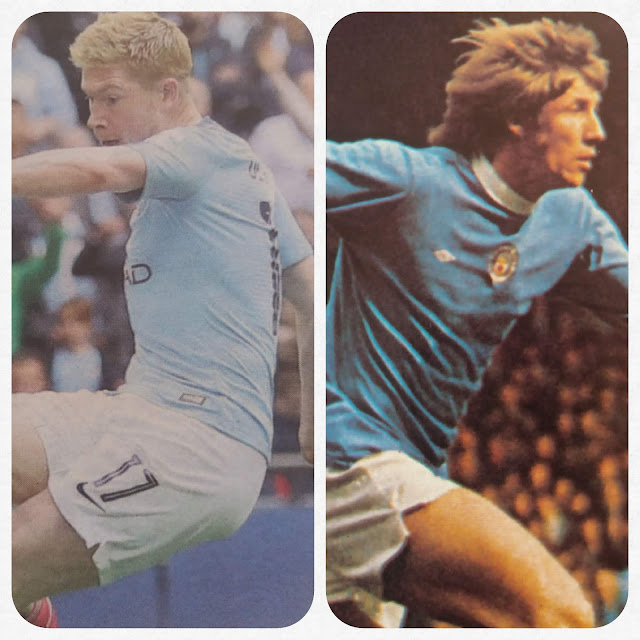 De Bruyne has often been compared to Bell, perhaps still City’s greatest-ever player, although that mantle is under pressure from numerous candidates from the modern era of success. Here we look at the skills of both and try to decide who comes out on top: 10 categories with a final score out of 100.

Colin Bell’s shooting often provided spectacular goals, none more so than a Van Basten-esque diagonal volley at Stamford Bridge that brought Bell’s trademark nod and hand shake celebration. For England the 9 goals in 48 appearances also included prodigious strikes v Scotland, Wales and Czechoslavakia. Predominantly right footed, with an admirable accuracy from all distances and angles, Bell could not be faulted in this area  9

Kevin de Bruyne has built a reputation for exceptional freekick expertise, scoring some absolutely sumptuous goals in City’s triumphant rise to the top of the tree in England. From rolling clever freekicks under the wall, to curling sublime efforts over and around it, the Belgian has a box of deadball tricks that has few peers. The hit in open play at St James Park in November 2019 contained a power that few in the modern game could have matched, as the ball zipped past Martin Dubravka like a heat-seeking missile, ditto his two-touches -and-smash-it goal v Swansea a year earlier. 9

Colin Bell ran City’s midfield with a calm assurance for a decade or so, before calamitous injury forced an end to a majestic career. His use of the ball in all areas of the middle of the park was always exemplary, although the quality of the surfaces on offer in the 70s did not always allow the closest of relationships with the ball. Ironically, it was in getting his studs caught in the turf v United in 1975 trying to control the ball on the run that the horrendous injury occurred. 8

De Bruyne is such a master of the ball that he often seems to be stroking it around while looking elsewhere to see what opportunities are opening up further up the pitch. He is a master of control and of pass length and pace. Seldom does the ball leave his immediate area in a way he has not designed it to. The above-mentioned goal against Swansea involved two gentle touches forward whilst looking ahead to assess space. 9

Bell’s metronome passing ensured that the great City side of the late 60s and early 70s packed a proper punch. With Neil Young gliding in from the left and Francis Lee hammering through the middle, it was Bell’s laser passing that often put them through or provided the last assist from the right flank 9

Probably the best passer in Europe at the moment, you get the feeling De Bruyne could land a tennis ball on the back of an elephant and make it stay there. Some of his sublime passes to put City’s strikers through to score have been too good to believe. A true master at work, especially when curving low balls in from the right flank that are impossible to defend against, Witness his sublime efforts in setting up team mates week in week out, beautifully illustrated with one of the passes of the season against Stoke 9

Colin Bell could pick out a pass that nobody else in the City side of that era could see. Long and short, nothing phased him, pinging passes across rutted ground and the green grass of early season with equal measure. Thanks to Bell, the likes of Lee, Marsh, Law and Young feasted on a hatful of chances that were more difficult to miss than score. 8

With the master of all impossible passes, David Silva, in advanced pre-retirement days, De Bruyne has taken on the mantle of being City’s chief visionary. That he has done it with complete nonchalance suggests here is a player with a different kind of vision to the others. Sme of his passes find places that do not exist to the rest of us. 9

As seen with his calm handshake goal “celebration”, Bell was always an undemonstrative personality in an era of multiplying drama queens. If the 70s brought a tidal wave of players trying out new hair styles and pushing new borders of extravagant, outlandish behaviour, the shy Bell was not part of that scene at all.  Never less than cool, calm and collected, he was the purest example of good sportsmanship, fairplay and level-headedness. 10

Often in the background when things are getting close to boiling point, De Bruyne’s special abilities sometimes lead to frustration when others cannot match the standards he expects. Wtness arm-waving moments and face pulling exasperation at less gifted team mates who have flunked in his opinion. His “let me talk, let me talk!!!” high-pitched outburst after the Napoli game an example. 8

Bell scored a fair number of goals with his head and was not averse to an aerial challenge in an era when the ball spent much more time in the air than it does today. High profile goals v Bilbao for City and Czechoslavakia for England (where he was hurt in a brave challenge) prove his ability and courage. 8

Not the Belgian’s strongest asset, De Bruyne is seldom to be seen getting on the end of a cross or challenging for a high ball, partly because the crosses in question are often dispatched from his own boot. 7

In the no-holds barred days of the 70s, if you wanted to rule the roost in the midfield area, you needed to be able to take care of yourself. Bell’s tackling was fearless and crisp, often starting moves forward that then resulting in an assist from the same player when he had caught up with play. His all action lung-busting style meant that he was often the first man back to block an opposition break after an unsuccessful City attack. 9

De Bruyne is not afraid of a tackle, despite the damage done to his body in various injuries. In today’s game, where players have a more specialised role to play, he can rely on the likes of Fernandinho, Rodrigo and Nicolas Otamendi to do the lion’s share of the breaking up of play, however. 8

Malcolm Allison nicknamed Bell "Nijinsky", not after the Russian ballet dancer (although that too might have been apt), but after the racehorse of the time. Here was a player that seldom stood still. Bell’s stamina – as he often admitted himself – was one of the attributes that made him different. 10

Here is a thoroughbred race horse. Like Bell, De Bruyne seems to have an extra reservoir of energy to carry the side when it is flagging towards the end of vital games. 9

Bell was not the fastest of players, neither was he a slouch, but he made up for that with non-stop work-rate that meant he was almost always up with play at stages of the game when others were clearly flagging. 8

Deceptively fast despite a languid style and slightly loping gate, De Bruyne is as quick across the ground as he is in his head. 9

Bell was the one player holding the whole City show together. Never the show-off, his entire ethic was to be of use to the team. His character matched this perfectly, as he was never interested in the personal spotlight. 9

In this modern football world of Instagram, Twitter and high profile sponsorship contracts, all the world’s top performers need to have a marketable personality. De Bruyne, now touted as perhaps the world’s third best player after Ronaldo and Messi, is no different. On the pitch he is a master of bringing others into the game, but contains a streak of individualism the retiring Bell could probably never have mustered. 9 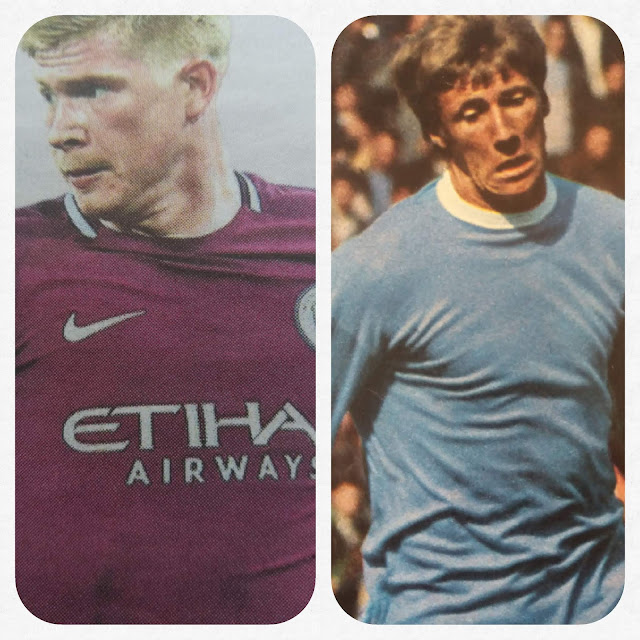