Megabucks Barmy Manchester City, already reeling from their Carling Cup collapse at old Trafford, have Uberboss Gary Foot-and-Mouth to thank for steering the ship back into calmer waters. Visiting supporters in the Cretin’s Leap pub in Dar-es-Salaam, Foot-and-Mouth said, “This is the second supporters bar to be awarded Manchester United Meeting Place status and I am delighted to say, here and now, on and off the record, to that camera over there and to the three of you at the bar, that United will soon be the very biggest name in world football. If it weren’t for Milan bottling it over kaka and us having to play Benjamin instead, we would already be there. At least we are going to win the FA Cup and you can quote me on that! Cheers, everybody”

We can sensationally lift the lid and uncover the pack of festering rodents after it was revealed in an under the table sting operation conducted by our reporters Phil Marlowe in Chessington World of Adventures and Dixon Dockleaf in Alderley Edge that England captain John Cherry had had an illicit affair with RifRafa Binbag Benitez, who he met during an illicit undercover, no-holds-barred private tour of Stamford Bridge. A spokesman said, “We have seen them here frequently, holding hands, smelling of cheap gin, whispering and giggling as they saunter through Idle Valley, the big park by the river. They looked very in love, if a little drunk. Last month Cherry took Binbag around the ground. They seemed to be having a lot of fun, until Binbag saw the bill”. In another development, RifRafa Benitez’s ex, Barnyard Soltidorè, an organic farmer and tartan sock model from Cadiz, was seen holding hands with Delamere Skinty, the foul-mouthed son of Liverpool FC’s owner Sir Tom Skinty, who himself is no stranger to women who wear their hair up. Skinty Junior, whose dog Fabulous was discovered drowned in the Mersey yesterday, bloated from decomposition and almost unrecognizable except for its Stetson and loud jewelry, has denied any wrongdoing. “I love my dog like I love Liverpool,” he said. “And boy do I love Liverpool.”

Nerdy Tongue Stuck by Albert Tatlock on the North Circular

Manchester United superstar and housewives favourite Gary Nerdy was yesterday facing a weekend in hospital after having a two hour operation to remove his tongue from Sir Massive Ferguson’s bottom. His father Nerdy Nerdy, a local celebrity billiard ball manufacturer said “Sadly Gary Nerdy cannot speak at the moment. His tongue is sore and he has lost the tip to the surgeon’s knife, you know, the bit with the funny little bumps on it. Anyway, he wanted me to explain to all of his fans that he’ll be back and that you shouldn’t worry at all. He is in good spirits and intends to put his tongue right back where it belongs despite the obvious risks. He will be back with his old wisecracks in the very near future” Sir massive was unavailable for comment but it is known that he spent training at Carrington sitting awkwardly on a huge stack of Ikea cushions. 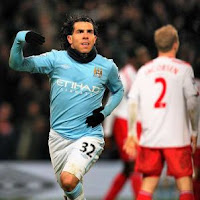 The fishing net on his head, apparently an ancient Patagonian headpiece worn by the sailors of Puerto Ventura, close to where all those penguins live, is said to hold mythical powers and gives the wearer an innate sense of both irony and persecution. In olden times fights would develop and would often be pursued to the death, when fishermen criticised the contents of each others lunch boxes. Tevez’s own father, a renowned trawler man and hat wearer himself, was said to have been stabbed in the neck by a fellow sailor in the River Plate estuary when he laughed at his sardine sandwiches.


Wengaboys: We Will Win With Sol…
But City’s signing of Vieira is laughable By Gideon Lampstand, the Voice of Reason: 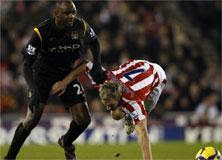 Arsenal chief and cabaret owl impersonator, Wengaboys Arsene has stated that the signing of Sol Campbell, a promising and well built fitness fanatic from up and coming Notts County, could tip the title balance in his Gunners favour. Megabucks Laughing Stock Man City, meanwhile, have again made themselves look ridiculous and desperate by shelling out a queen’s ransom for the decrepit and well-over-the-hill ex-Arsenal midfielder Patrick Walkingstick from InterMilan reserves see Pages 57 – 64

In a more or less developed development, the upright, British Bulldog have-a-go-hero, milky-faced, smooth thighed, Hovis eating all-action hermaphrodite Christopher Ronald has said he is “really quite sick and tired” of playacting monkey jawed Southern Europeans trying to con the arbitro in Spanish league games. The outburst by England’s cleanest and most upstanding export to foreign shores comes after Ronald was sent off during the match with Malaga, in which he had swiped a swarthy defender across the nose to repel the chap from giving him a dangerous broadside. The defender, nicknamed “Darky Trickster” by coach Luis Aragones, is said to have later complained of “double vision and a nose broken in three different places” but it was his on-field play acting that got our man Ronald sent from the field of play. Instead of staying on his feet and putting his nose in his pocket to be sorted out later, the snivelling wretch went to ground in the most casual and theatrical manner imaginable, rolled several times until he was lying on the feet of the linesman and then began weeping uncontrollably, whilst twitching like an electric prod had been introduced to his dark pipe. Ronald, who is proud of his record of never having been sent off before and never having lost his footing under challenge from burly British beefcake no-nonsense defenders, is appalled at this scourge of southern European football. “Stamp out this pansy cheating” he shouted, as he was led away to have his hair fixed.

“I am not good enough even for this shower of shite!” Andypanderson Comes Clean

In another development, the Manchester united and Brazil heart-throb Andypanderson has admitted that he is coming up short in the football stakes. “I have done my best to fit in, only cried a little bit when Sir Massive threw things at me and called me a jelly legged namby pamby Brazilian ponce and have tried my absolute best to be as good as Sir Bryan jizz, Paul Stools and the effervescent Far Flung Parts, but I just can’t do it. They are all far too good for me. I want to play for Liverpool, where I could swap wayward passes with Lucas and still look vaguely credible. I could send overhit passes to Kripiakos and watch him head the advertising boards by mistake and put through balls on a plate to EggNogg and see him blip the ball into his own ankles before falling over. It’s really unfair.”


Nerdy To Be Put Down

It has been revealed that Gary nerdy, the popular Manchester united star and stand-up act, may have to be put down at the end of the season, as a patch of nefecolumpus rot has been found on his tongue, which could be fatal anyway. “This is a fungus that grows rapidly as a result of licking things that have been on or close to the floor or somebody’s bottom,” said Professor Filsbury Harrap of Winnipeg Institute. “Prolonged antics with used socks usually produce a rash of green mould on the base of the tongue, which quickly grows inside the windpipe and causes the brain to turn to blackcurrant jelly. This in turn leads the possessor of the furry tongue to utter the most devilish gibberish and balderdash, which in turn can mean the sufferer becomes a figure of ridicule and has fun poked at him as well as tea poured over him whenever he stops to say something else. The kindest thing really is just to shoot the twat.”


TEVEZ FOOTBALLER OF THE MONTH by Nicholas Parsons in Guadalajara
In an archetypal development, there was a minute’s silence here after Megabucks Manchester City ace striker Charles Tevez was awarded the player of the Month trophy for his splendid return of precisely no goals during the month leading up to Christmas. The award, a small copper replica of Ivana Trump’s putting wedge, was handed over by a sprightly and good humoured Sir Massive Ferguson, 89, who said “I am particularly happy to give this thing away, as I was to give Charles himself away, the useless directionless little turd burglar. Thankfully my own team has gone from strength to strength using a small boy from France with a head like an avocado pair. Charles is just muddling along in mid table but that’s his choice. One piece of advice, sonny. Never ever leave Manchester united and think it’s clever to make a big noise about it. Do you see? Now take this keffing trophy and stick it up your mantelpiece.”

SKINTY: “BOMB OUT, BUM FLUFF, YOU SMELL OF LIVERPOOL”

With these harsh words Delamere Skinty, son of Liverpool football Club owner George Skinty Senior , finally got off his chest several months’ worth of deep and thick-set frustration over his club’s demise in world football. Liverpool, now a feeder club to Getafe Mundial but still run passionately by Binbag Pinstripe Rif Rafa Benitez, the man who likes to say “no”, are all but finished for this season after a sterling comeback against reading was curtailed by the lower division club suddenly scoring more goals. “This means we look again at the league, no?” said Señor binbag in a rare moment of clarity. Skinty Junior meanwhile was in the Pickpocketer’s Arms in Bootle to talk to representatives of Liverpool’s world famous Witty Kop whose banner “Tanks Yanks But No Tanks Like” gained 2nd place in the recent World Witty banner of the Year competition. The winner, for the 14th year running, was Manchester United’s revolving number banner, which is so funny it has now been granted World Heritage Site Status; meaning people from Korea can come and take photographs of it. When asked why his father was overseeing such a huge financial crisis, Skinty junior replied, “Suck my hat, scumbag, and pick the dew drops out of my trousers” the riot that ensued ended with Bootle police calling for reinforcements from as far away as Minsk, as Skinty was held by his trouser bottoms from a bridge above the M62.

Latest: GARY NERDY UNABLE TO JOIN TELETUBBIES IN THEIR UNDERGROUND HOUSE. LALA and DIPSY THREATEN LEGAL ACTION IF “THAT TURD FACE STEPS ANYWHERE NEAR US”

Latest latest: TOGO THROWN OUT OF FIFA FOR HAVING A TEAM BUS WITH FLAT TYRES AND NO WINDOWS


BRIDGE’S POOR FORM IN CHELSEA MATCH EXPLAINED: left back was carrying machine gun hidden in his underpants for entire game.