SHAUN WRIGHT-PHILLIPS: LAST OF A KIND 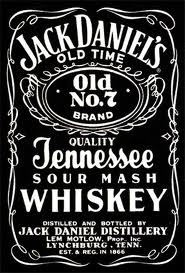 "He is about as far from the stereotypical young footballer as it is possible to get. There are no flash cars, no designer clothes and definitely no visits to night clubs..." Chris Bailey, MEN, after Shaun Wright-Phillips' derby debut at Maine Road, November 18th 2000

There's an unusual and slightly haunting image of Shaun Wright- Phillips that I have in the back of my mind and it will not go away. It is not of the little man climbing off the bench, raw and enthusiastic, for his debut in 1999. Not the vaguely ridiculous robot moves he threw after scorching the top of the net in the last minute of an epic 4-1 inaugural Eastlands derby win. Not the scintillating pace and drive of his goals coming in from the right wing against Bolton, Fulham, Bradford. Nor is it the delightful cameo he produced at the Stadium of Light on his second debut in August 2008. The picture in my mind is of a diminutive figure in jeans and obligatory gangsta tee-shirt, somewhere in London in the early hours of yet another Premier League Night Out. Shaun's eyes are blurred and he looks like he is about to stumble off the curb. Stuffed into the waistband of his bedraggled jeans is a half-full bottle of Jack Daniels.

Without doubt, Jack Daniels would not have been a name close to either his heart or his lips when he set out on the unlikely road to success at Nottingham Forest's academy in the late nineties. For a lad so diminutive, even the tenuous but slightly overworked link to ex-Arsenal legend Ian Wright would not have been of any great assistance, if this tiny man could not persuade Those That Know that being as tall as a leprechaun is not necessarily a deterrent to playing top flight football. There were certainly many who doubted in those early days. Kenny Dalglish and Alex Ferguson are living proof that the football gene pool does not always leap successfully from one generation to the next. 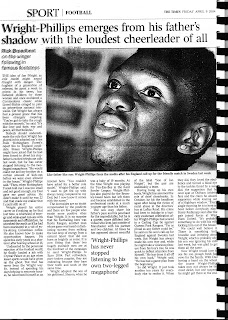 After a 6-0 demolition of Sheffield United at the beginning of 1999-00, it was decided that the time had come for the little reserve winger from London to dip his feet. Burnley away in the Worthington Cup. The first leg had already been won 5-0 and the bony kid came on in the 69th minute to replace Terry Cooke for his first taste of the big time. 3,647 people witnessed the act, hardly the big stage that he had dreamed of. That night he wore a pair of shorts that reached below his knees. His short-sleeved shirt came down over his elbows. there was hardly any shaun Wright-Philips to see at all.

As City hit the top of the table with a 1-0 win at Walsall, it was clear that Joe Royle's men had a good chance of cruising straight through from the old 3rd tier to the Premier league. A serious resurrection was well under way. As a result of this, Wright-Phillips was used sparingly in that glorious free-flowing season, which ended at Ewood Park with emotion, fans and goals overflowing in all directions.

He did not have long to wait to make his league bow during that same season. It came in the salubrious surroundings of Vale Park, on a gloomy Winter afternoon in the Potteries, where City won 2-1 with late goals from the foot of Vale defender Snijders and City left back Danny Granville. Chris Bailey wrote of the debut thus in the Manchester Evening news: "...teenage Wright-Phillips, living proof that you don't have to be a muscle-bound six footer to create havoc on a football field...". This ability to be small yet big would assist the new City winger in a career that would ultimately take him all the way up to the giddy heights of international football. At no point did any critic cite a lack of inches as something that might hold him back. 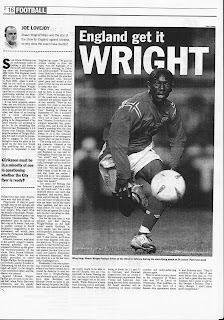 His first full start in the league came a week later in an exhilarating 4-2 win over alan ball's Portsmouth, kept his place for the trip to QPR a week later (1-1) and was an unused sub for the 1-0 win at table toppers Charlton Athletic on 20th November. With Joe Royle bringing in strikers in his own mould (the bruiser Lee Peacock and the bruised Bob "Binman" Taylor) plus Mark Kennedy's terrific form on the left wing, first team starts were sparse for the youngster as City's promotion rush began to take serious shape. With an increasingly immovable front two of Goater and Dickov (the latter looking collosal alongside Wright-Phillips), starts were at a premium.When he realised that Royle also fancied Lee Mills and Danny Allsopp ahead of him, Wright-Philips may have had his first doubts about City, but better was to come in the season that followed and an award of Young City Player of the Year made up for the lack of starts in the second half of the season.

Despite City's return to the Big League seeming a little premature, the young winger's chances of first team action seemed to be compromised from the start with the headline acquisitions of George Weah and Paolo Wanchope, but he came off the subs' bench in the opening day slaughter at Charlton and never looked back, making a total of 20 starts in a season that would ultimately end in disappointment and relegation back to whence we had come. 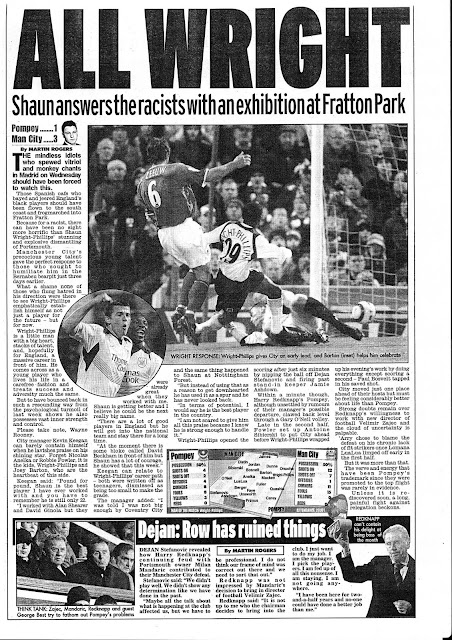 Although that first full season was fraught with crisis, surrounded from start to finish by the thick smoke of failure, there were cameos of gusto and verve from the little reserve, a jinking performance in the 1-4 reverse at West Ham enough in fact to persuade Royle to put the unpolished little gem into the starting line-up against United, which City duly lost 1-0 with SWP getting City's Man of the Match honours for the 2nd consecutive week. He had arrived in typically electric fashion in everybody's line of vision and there would be no ignoring him now.

With Royle banished at the end of a bitterly disappointing term, Kevin Keegan's arrival was seen as a promising move for Wright-Phillips' immediate prospects. Now seen as the standard bearer of an increasingly productive City academy, 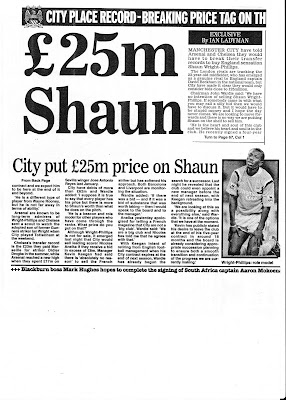 the little man played an integral part in a swashbuckling promotion season, weighing in with his first goals (8 of them in all) as the Blues went storming back up at the first attempt. Playing wide on the right of a four man midfield with Huckerby and Goater up ahead, Wright-Phillips was part of a City side that scored a record-equalling 109 goals, amongst them a corker at Millwall in a fantastic 3-2 win against the odds at the New Den, an unorthodox corkscrew volley v Bradford City and both goals in a 2-0 almost-title-clinching win at rivals Wolves at Easter. The little man had not just arrived, he was now a matchwinner. In the Keegan years, he became something of a favourite, sometimes playing at right back (and getting sent off against Everton) but mostly in his customary wide right roving role where he could stretch opposing defences with his speed, guile and deceptive strength. He seemed to thrive around the likes of Anelka and Fowler, perhaps remembering having to learn his trade watching Lee Peacock and Lee Mills, and he never ever looked phased by the opposition. The Kippax took him to their hearts, the little dynamo with the heart of a lion and chants of Shauny Wright Wright Wright echoed around the old ground every week. These must have been heady times for the youngster. 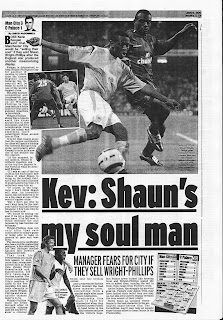 He starred in the 6-2 win over Bolton, a 3-0 win at QPR (where ironically he will play this season and where, in this game, he was racially abused by some in the crowd, according to his watching father) and the other-worldly cup replay win at Spurs, before scoring a corker against United to give Eastlands its first taste of derby success, but things were beginning to go sour for the Keegan regime and he - along with Keegan himself- would soon be gone. The performance against United and growing stature of SWP in the top flight game led to an England call up for a late season friendly in Sweden. Injury curtailed his chances and scuppered his late bid for inclusion for Euro 2004 but a full international debut was not far away, coming eventually against Ukraine at the start of the following season.  When that chance did arrive, Wright-Phillips delivered a debut at St James Park, which resembled perfectly all he had done for City up to that point. He topped off a sparkling display with a raking shot from the right to score as well. Wright Phillips was by now at the very top of his game and, as Keegan's empire wilted as quickly as his will to continue, the manager aired doubts about City's ability to compete if rumoured interest from Arsenal and Chelsea materialised at an eye-watering 24 million pounds. Keegan would not last to the end of the 2004-05 season. Wright-Phillips did, helping seal an ecstatic late run to within a point of UEFA Cup qualification under Stuart Pearce (including a swerving run and blockbuster shot at Villa Park) but said farewell soon after, joining the revolution at Chelsea. Foolishly, some said.

His stay in London featured much inactivity on the bench, a stalled career and sporadic international squad appearances. He was considered a regular and when a revamped and heavily monied MCFC returned to bid for him three and a half years later, the interest of Mark Hughes and Thaksin Shinawatra persuaded him to "come home". His price had fallen from 24 million to just 8 in the space of his Chelsea stint. This move back north could also be described as a mistake, for, once his stunning two goal debut at Sunderland was over, he gradually sank into a squad position almost identical to that which he had occupied in London. With City's riches building up and Eastland's grey precincts suddenly pulling in the most extravagant of world talent, the little man once again found himself on the outside looking in. There were still occasional signs of the deftness of foot and the lightning bursts of speed down the touchline, but they had become all too infrequent. A sign of a change in character came too, when his garrulous father insisted his son had been "mugged up" when the club turned down excessive wage demands. The writing was on the wall.

Now he returns to the big smoke, a player approaching the twilight years, rich beyond his dreams, but far from the sprightly little urchin, who first skipped onto the wet pitch for that cup tie at Burnley. The true standard bearer for City's fantastically productive academy system now bears the hallmark of the excesses of modern top flight football: his is a career that suffered for the pursuit of money when his talent could have taken him even further than it ultimately did.

Despite this and all the modern day trappings that he has gathered around him, the advisers and the bottles of American whisky, for good or for bad we are probably saying goodbye to the last player of this kind to grace the sky blue shirt of Manchester City in the modern era. An academy product that played more than 200 games for his club. His ilk are a near extinct breed in this era of greed is good and the fastbuck to heaven. For that at least, we offer you our thanks, Little Man, and wish you well at Loftus Road. 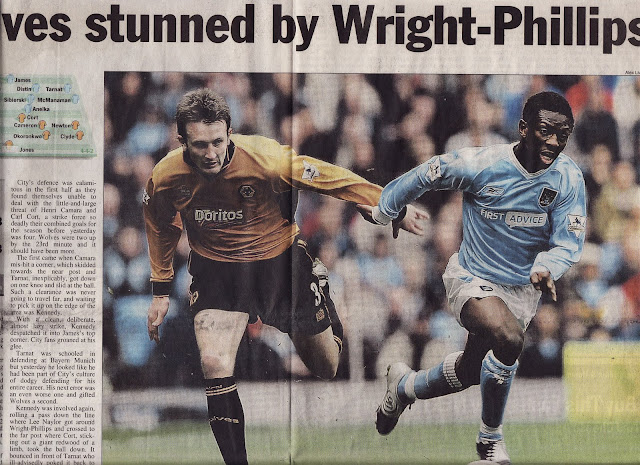