Now would be a good time to take in a sharp breath or two, before any bubbles that might be clouding the vision fade and pop in front of the eyes, making us blink like a March hare. Taking a swift glance at this will not help much, mind you:

Saturday, 15 October 2011
Quite something, I think you'll agree.I'm not sure any of us quite believed in even our giddiest moments on the magic juice that it might come to this. On the brink of a Manchester derby (that's a proper derby, Mr Ferguson, where you play your proper first team and make proper excuses afterwards) on enemy territory, we prepare to enter the field top of the table, two points clear of our hosts with a better goal difference. Forget not that the United juggernaut put eight past Arsene's stunned crew earlier last month, but still live in our shadow by two goals. And two points. After eight games. Seven wins and an unseemly scramble at Craven Cottage, which should also have garnered three points.
Suddenly, what might have been the crowning glory of a Champions League game at home to a decent Spanish outfit, can't be swept aside quickly enough. That's all very well, your Rossi and your Yellow Submarines but looming on our horizon is one of those epoch-defining games that make your trousers stand up even when they are not being worn by anyone.
As is customary at these times, our opponents-to-be have outdone themselves in lethargic one-liners to the press and wacky team formations in "their most important game of the season".  How long, one wonders, can Ferguson perpetuate this nonsense before someone (hopefully wearing an Elizabethan cape, tortoise-shell shoes and a stethoscope) runs up and blows an enormous whistle right in his face? Liverpool -Man United, that age-old squabble, took place in bright sunlight, but with little or no illumination.
In his unparalleled, impartial way, gary neville's column - naturally backing up all Glaswegian ethical codes regarding Liverpool (toughest game), team tinkering (right to rotate) and Wayne Rooney (got to go to Poland/Ukraine) - confirms what we know already. United are inhabiting a world of increasingly ill-formed and ridiculous denial.
Liverpool v United was a study in the Incapable versus the Unwilling, nothing more. If United want to try and convince themselves that a Liverpool so timid, so cautiously structured, so reluctant to push more than two men forward into attack, is the acid test, then they've badly mixed up their "sulphuric" with their "hydrochloric".

In a moment of weakness, I sought comfort in this cutting from 1998 (above). Only 13 years ago. Click on it and treat yourself to the names in the immediate environs of Manchester City. They make pretty hilarious reading. We are in the third column right over to the edge of the page...it's a little blurred in order to protect those still with a weak heart after all these years.
Far be it from me to wander the corridors of the past, slamming doors, opening windows, fanning fresh air into murky, queer-smelling corners, but 1998 was not so long ago. A year of Pollock, of walking aggressively, of Bristol Rovers and Chesterfield, of tears, stale bread and the loudest wake up call since they attached an alarm clock to the side of Pluto's head and let him walk clean off the end of the pier. 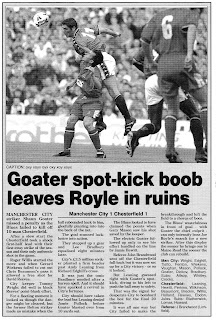 Instead of Michael Branch winging it past some nutjob assassin from Gillingham, we now have the sumptuously impudent Mario Balotelli larging it in front of the Villa fans. He skids to a halt, they jeer, he tells them to watch it, they tell him to go screw himself, he nearly scores immediately, then performs an overhead kick in front of them to put City one up. If this sequence had been enacted in 1998, or 1997, or 1996, the script would have been so different, as Jamie Pollock will tell you: fall over your own feet, crowd laughs (that's your own crowd laughing), stand up and rub yourself down, realise half of your arse crack is showing, go up for heroic clearance, flounce ball comically from twenty yards into your own net, crowd disintegrates, giant clap of thunder resonates, stadium folds like little cardboard animation, feeble pre-pubescent voice shrieks "Fail" in the background....

The tide that went out such an unfathomably long way on that sunny day versus Queen's Park Rangers, is now flooding back in. It has been on its way in for a good while now, but the surge is beginning to become a wide wall, a long liquid barrier of tossing spray, a fully-fledged sky-blue curler. The question is, will that mountain of perfect, symmetrical turquoise water come crashing down next weekend and obliterate all in front of it or not? The time feels right. Surf's up.