December confirmed to me what I have been thinking for a long time. I'm not a fan of the African Nations Cup.

Yaya will of course, be off in January, departing the fair shores of Albion to take part in the afore-mentioned tournament, a competition blissfully oblivious to the needs of Manchester City and its followers. Who can do the job that Yaya Touré performs week in week out? the answer to that is simple.


What will City's midfield look like without Yaya Touré? A veritable road block in the centre of midfield, it is about time somebody put in a good word for this man-mountain amongst the landslide of poetry written in the name of Señor Silva, the press pack attached to Mario Balotelli and the seething mass of hysteria that follows Kun Aguero's every broad-thighed shimmy. Yaya bestrides the midfield like a mammoth. The giant frame belies a graceful, almost twinkle-toed mastery of his art. Not the cleaver-in-hand butcher, nor the scavenging assistant. Yaya is the Delivery Man. He quite clearly does exactly what it says on the oversized packet. He delivers. All over the pitch. All night long. In all directions. In all weather and all competitions. he is always there, passing, moving, receiving, going again.


These last few days, admittedly, he has been faced by a Stoke side so timid, they might have been carrying pepper spray in their inside pockets. That there was little change to their ultra-functional approach, despite a succession of goals going in, speaks volumes about the philosophy rugged Tony Pulis had imbued in his storm-troopers: right lads, go in, sneak the medium-sized defeat and retreat immediately. No harm done. The glory of ninth place will be ours, oh yes.

The came West Brom, a team happy to get nought on their own patch. A team, according to manager Roy Hodgson, who don't often defend well, but did so on this occasion. In fairness they had a couple of attacks too. City's possession in both these games was extremely high at various points, touching an incredible 95% at one point against Stoke and 82% in the first half against West Brom. What must Stoke supporters have thought when watching later on television, as the little top of the screen caption bellowed "Stoke City 5% possession"? Time to go behind the sofa.

As Yaya could have told you, it was just like Barcelona, only better. That this overpowering delivery of ball to feet to feet to feet only brought three goals against the Potters and one point against the Baggies might be cause for concern to some. That horrendous stampeding noise behind us is being made by United and Tottenham re-enacting the Charge of the Light Brigade, but let's ease up on the nerves a little. It is the Christmas break we have reached, not Easter, not Spring Bank Holiday and we are top for the first time in 82 years. Eighty-two years! That is something to roll around in and rub yourself all over with, not shred and discard.

For those out there with fire licking at their backsides and a raging torment tickling their brains, take a look at these statistics, pour yourself a big glass of cognac and raise it in the name of Yaya.

CITY only the 2nd team EVER to remain UNBEATEN at home in any competition throughout a whole calendar year. Last time this happened was in 1920s 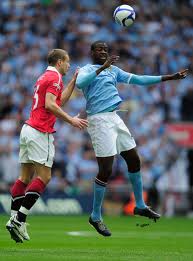 City -"The League Leaders" -  have now scored three or more times in 12 of their 17 fixtures. Sadly, for the first time this season, nil was the score last time out.

City have already won more games this season, than they did in the entirety of 8 of their last 14 Premier League seasons.

I will miss the big man's nimble progress in midfield, his pirouettes, his beguiling bursts of speed, his tank-like posterior casting a shadow the size of a Hummer over the ball, the languid shake of the head, a wistful flap of the arm as some less tuned in team-mate completes a savage burst of acceleration into the wrong channel, at the wrong moment.

Hurry back, Big Man, we're going to miss you.
Posted by Simon Curtis at 2:55 PM