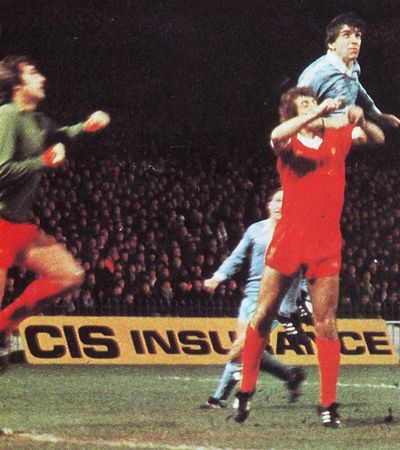 Amongst Liverpool supporters, the name probably deserves only a flicker of attention before getting back to studying the top of the Premier League table. For City fans, however, it is a name that resonates as forcefully and clearly all these years later, as if someone had just hit us over the head with a bin lid. To maintain the image, if little Alan Wilkie of Manchester Derby fame is the refuse bin in the corner of the kitchen, Alf Grey is the municipal skip on the edge of the industrial estate.

For Mr Grey was the upright, quasi-military-looking fellow, who managed single-handedly to whistle our beloved City out of a hard-fought, mud and feathers League Cup semi final in 1981 against Liverpool. Nearly four decades later some of us are still smarting about his role in what was to turn out to be a truly epic two encounters with the team of the 70s, which would also become the team of the decade ahead and the one after that.

Liverpool were a well-oiled goal-scoring machine in those days, with a spine of clever international players, who could look after themselves in a fight and turn on the tricks when the sun came out. Clemence, Hughes, Thompson, Alan Kennedy, McDermott, Ray Kennedy, Souness, Dalglish, the names rolled off the lolling tongues of the devoted press. This was a team that carried all before it, winning trophies galore and setting standards that teams today are still chasing.

Before City's modern era glut of big games, an appearance in a semi-final was reason to put out the bunting and grab the prayer beads. In 1981, memories of Wembley were not too distant either. City had won the League Cup in 1976 in the "Dennis Tueart Final" v Newcastle and lost it in 1974 in the "Gary Pearce Final" v Wolves. Added to the 1970 final win v West Brom ("The Horse of the Year Final"), the League Cup in those days was, as now, a favourite hunting ground for the Blues.

Let me take you back to the winter of 1980, however, and we see that the City side ambling about the playing fields of England was a far cry from those Wembley vintages. Big Mal was in the grip of his mad clear-out, levering the likes of Gary Owen, Peter Barnes and Asa Hartford out of the Maine Road doors, after Watson and Brian Kidd had been dismissed before them. A whole generation of hopes had skidded on the cobbles of Claremont Road as they bounced off into the distance. 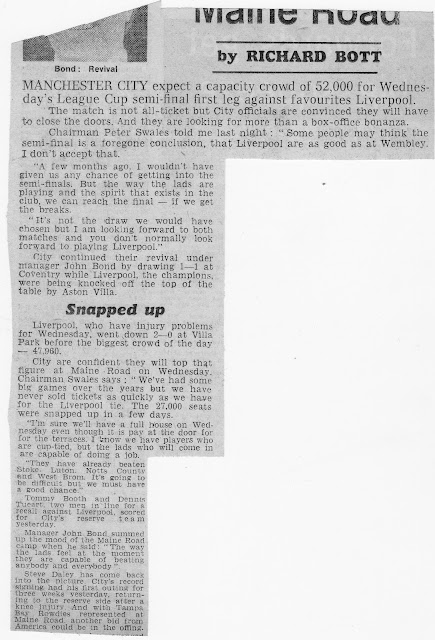 By November, Allison was gone too, replaced by the bouffant boaster, John Bond. Brash and saddled with a country burr that made him sound like a well-dressed farmhand, Bond had taken a depleted, bedraggled squad by the scruff of the neck and dragged it kicking and screaming from the foot of the table, where Big Mal's haphazard tactics had dropped it.

With little cash to spend, he had brought in three old-timers, who few on the Kippax held out much hope for: Tommy Hutchison, a leggy winger from Coventry, Bobby McDonald, a heavy-thighed left back colleague at Highfield Road and, perhaps most surprisingly of all, Gerry Gow, a gnarled old ball winner from Bristol City. Gow's fuzzy hair was greying, his legs were thin, he appeared knock-kneed when he ran, none of which helped banish the air of resignation inside Maine Road when Bond's first game in charge ended with home defeat to a sterile, docile Birmingham City.

In fairness, the three new recruits arrived after this game and all were to fit in astonishingly quickly.

On a cold wintry night in Moss Side some thirty short years ago, more than 48,000 pressed into the old ground to witness the remarkable continuation of John Bond’s sky blue miracle, having hauled City off the bottom of the table and embarked on not one but two cup runs. Stoke, Luton, Notts County and a nail-biter against West brom had all been successfully negotiated, the first two whilst still under Allison’s managership. The Stoke game had involved brisk performances from Dave Bennett and Tony Henry, two bit part players, who were set to write their names in caster sugar and hundreds and thousands as the League Cup run ran on.

By the time Notts County hove into view, Bond had really taken charge and City’s lifeless corpse was once again twitching vigorously. This game would convince one or two of us that the early surge of positive results under the new bouncy-haired chief were not to be short-lived. As Bond’s reign took off, we had seen the following happen before our increasingly disbelieving eyes: 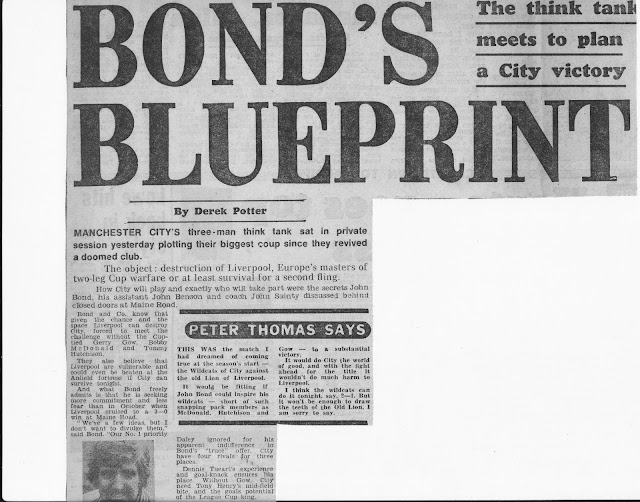 So to Notts County, 2nd division leaders, to be promoted at the end of that season, but a team with no answer to City that particular night and, especially, no answer to Dennis Tueart. This was one of my favourite memories of Tueart, a player who provided us all with a tank full of special moments to remember him by.

He was by this time reaching the final stages of what had been an utterly exemplary City career, which would see him play his last game for the Blues in the shocking relegation cliff-hanger with Luton two years hence, followed by a brief spell at Stoke, then retirement, but here was the Tueart of old, darting, scampering, sniffing and, above all, dispatching that greasy spheroid into the old onion bag. Not once, not twice, not thrice, but four times, he slid in and beat the County keeper. Final score 5-1 and City on a real roll.

Don Hardisty’s report in the next day's Daily Mirror stated, “Yet Tueart was lucky to still be on the pitch. Booked in the 2nd minute for a trip on County defender Pedro Richards, he handled a centre from Kevin Reeves into the net in the 15th minute. In the present disciplinary climate he was lucky to avoid a red...”. City would have the tables turned in this respect come semi-final day.

But first it was back to the bread and butter of climbing the league table away from the deadbeats at the bottom. The impressive home run continued with the following results:

City’s away form was patchy, though, and in between this run of home wins, the Blues drew at Filbert Street and lost at Roker Park. The game before the quarter final with West Brom saw a fine 3-2 win at Selhurst Park, masterminded by Gerry Gow’s combative, two-goal display. Gow, like Hutchison and McDonald, was proving the doubters completely wrong. City were now ready for the arrival of the West Midlanders.

This was to be Tony Henry’s night . A bit part player under Allison, he had been seen in the infamous City! Documentary as the one, who Allison always landed on when haranguing the team for their failings. Even the episode where the film crew witness Allison’s farewell’s to the squad on a grey morning at Platt Lane, his comment to Henry was “Don’t forget what I told you”, whilst patting and hugging the others with a trail of “good boys” and “keep it goings”. Henry took centre stage this night with the winning goal, a towering header in a crowded West Brom area, after the visitors had been given the lead by Tommy Booth’s early own goal.Luck and Lady Fortune herself, so long with their back to us, were now smiling at us and beckoning in the most beguiling way. 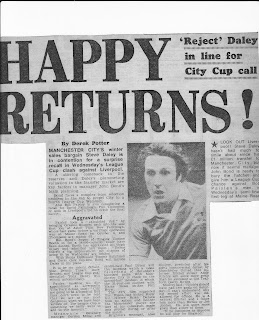 The win led to an outpouring of joy amongst City fans. We had reached a semi final after such a wretched league campaign and the others left in the draw were Coventry, West Ham and Liverpool, enjoying a stranglehold on both this tournament and the League Championship. Obviously, if we could avoid the favourites, Wembley would be a realistic target for Bond’s revitalised side.

The little balls rolled out and Liverpool it was.

The heaving Kippax welcomed bobby-tailed City onto the green beize. Within seconds of the start, Kevin Reeves leapt like a salmon on the last waterfall before egg-deposit-Sunday to skim the ball past a flailing Clemence and into the North Stand net. Cue cup semi final knees-up-mother-brown pandemonium.

In those days some of us had little idea how to celebrate taking the lead in such an important game, so my imminent embarrassment was mercifully cut short by a shrill sergeant major phweeeep on Mr Grey’s old tin musical instrument. Apparently, in leaping to head the ball majestically past the Liverpool ‘keeper, a gust of wind from somewhere deep inside Reeves’s 80s style loose fit Umbro shorts had affected Clemence’s ear-to-eye balance ratio. It was nothing a mere human eye would have been able to pick up, but fortunately, Mr Grey was made of far sterner stuff and, his sensitive antenae having twitched a message through to his frothing Grey Matter, he pointed his parade ground arm firmly for a free kick. The mood on the Kippax sank.

I can well remember the look on the faces of Souness and McDermott, as their Tom Selleck moustaches twitched knowingly. Phil Neal's chin quivered in the floodlights. Joey Jones's tatoos danced in an early impersonation of Modern Day Footballer. I swear one of them winked, whilst Alf Grey moonwalked back upfield, vast amounts of static zapping between his back pocket and his earpiece. 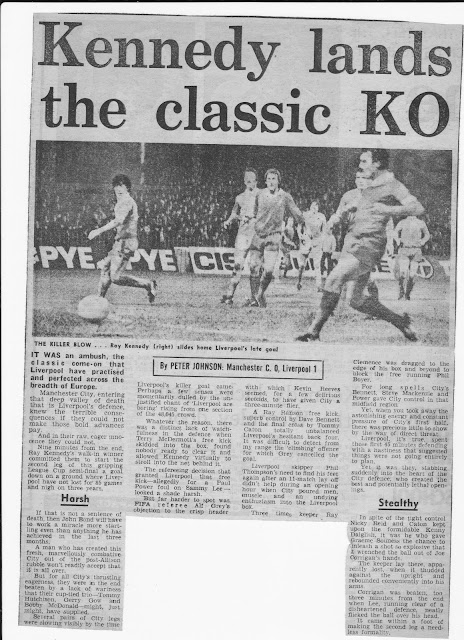 The match thereafter represented a classic Liverpool ambush. Peter Johnson, writing in the pre-sensationalist Daily Mail said: "Manchester City entered that deep valley of death that is Liverpool's defence....". For 81 minutes City's brave troops battered at the Liverpool rearguard, holding their own elsewhere on the park against their formidable opponents, despite the fact that they were shorn of their new heroes, the fully cup-tied Hutchison, McDonald and Gow. In their place, Henry, Bennett and Paul Power had worked their socks off.

But then came the breakthrough. 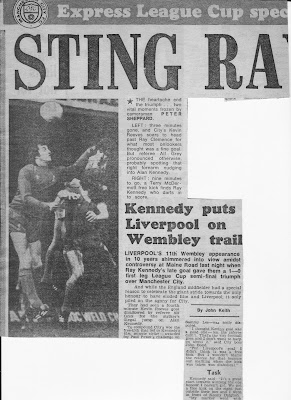 City, visibly tiring, allowed McDermott's freekick to drift through further than was sensible. the Kippax's chant of "Liverpool are boring" froze in our throats, as Ray Kennedy ghosted in at the back post, as he often did, and side footed home with ease. It was a smack in the chops for the young duo of Caton and Reid at the back, who had shackled the dangerous Dalglish all game. Sammy Lee then came within inches of making the Anfield return a no-go area, but it finished 1-0 and City still harboured some form of hope.

If anything the second leg was even more painful. A trip to Anfield did not encourage the sort of hunger for success that it might do today (although the results remain largely the same to this day).

This place in 1981 was an absolute fortress. I only remember City winning there once in the two decades from 1970 to 1990. Again the Blues took to the field without the cup-tied trio, with untried youth team player Gary Buckley making up the numbers. It was to be a heroic performance. With Liverpool ahead after just 22 minutes, it looked very like curtains, but in a 2nd half so full of grit they might have needed a bulldozer to clear a path, Reeves shocked the Kop with a 55th minute equaliser and City piled forward for the goal that would level things overall. 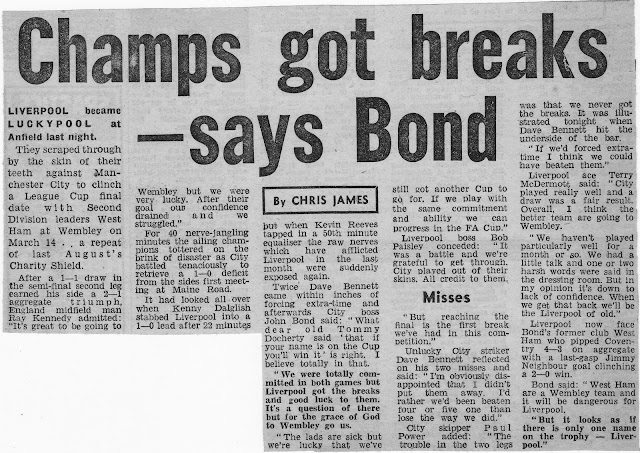 I was too young and fragile to attend a night cup tie of this magnitude at a place like Anfield (there was huge, what one might politely call "rivalry" between Manchester and Merseyside and thus plenty of trouble between the respective supporters at this stage) so listened intently to the radio commentary as the drama exploded across the airwaves.

That night, City tore down the flanks at Anfield in wave after wave of pressure, a pincer movement that culminated in young David Bennett heading solidly against the bar with the chance which would have squared the whole tie at 2-2. Liverpool, European champions and cup masters, hung on by the skin of their teeth, but the feeling of pride in Bond's rag-tag battlers had never been higher.