THE BEAUTY & THE SAVAGERY OF THE FIVE GOAL THRILLER

As a simple opening to the 2012-2013 season, a pair of 3-2 wins, one easier than it should have been, one far more difficult, was a great way to start. It is, after all, a scoreline rich in drama, heavy in sweat and toil, layered in its Hitchcock-like denoument. The plot builds, the emphasis shifts, the doubts mount. This is what we like at City. Here's to a few more before the nights close in:

Alongside all the broken glass and the melting tarmac, more ruined suppers and flat beer, the thought keeps occurring to me: losing or winning, 3-2 has to be the ultimate footballing joy ride: 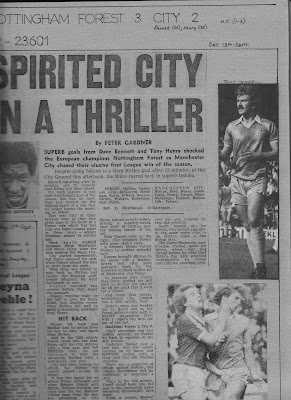 This victory came on the back of two consecutive 3-0 home wins v Coventry   and Southampton, as John Bond's glistening helmet of bouffed hair began to take hold of everyone's senses in a way teenage boys had never thought possible. The cheap but expensive cologne, the anaconda cigar and the signet ring that looked like a metalic life belt all helped transfix us young Kippax guns, but a 3-0 home win, even a brace of 3-0 home wins, has nothing to hold to a 3-2 victory on enemy territory. The sweat and effort of it all, the power and precision, the shuddering uncertainty, the glory and the dry throats, the floodlights shining off Bond's lovely fluffy bonce. Bewitching stuff. 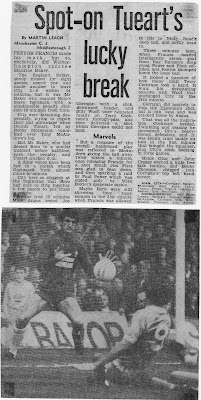 At different points in John Bond's tenure, you could see the way Francis worked within the team. Early on, everything hot as a fresh pancake, the verve and speed of the man carried City past the willing men of Middlesbrough and many others to boot.

Fag end of Bond's managership, Francis was beginning to look like the boy they tied to a tractor. CITY 2 SUNDERLAND 3: This horror (below) was the match that launched the career of Sunderland teenager Barry Venison and, for that reason alone, will go down as a severely below par Maine Road experience. Add to that the arctic conditions and the brittle as melt-ice City performance and we have the classic 3-2.: when it's in your favour, ham and mustard, when its not, a big sack of stinging nettles. 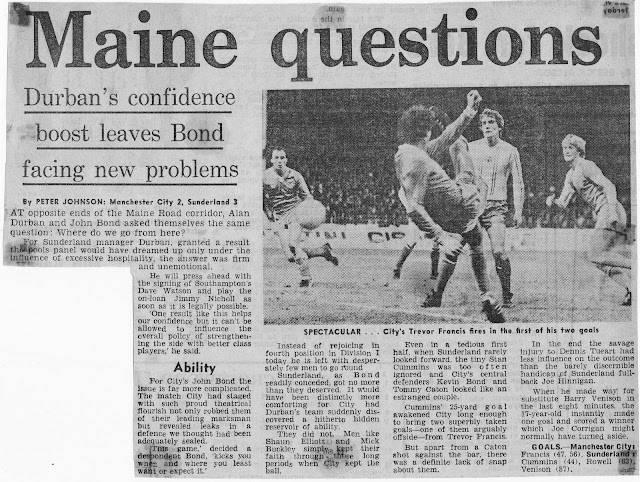 CITY 3 BARNSLEY 2: By the time the wondrous lustre had gone from Bond's Bonce, the puffy-cheeked leader was long gone from the Maine Road precincts, replaced by the dubious management skills of John Benson, the quiet man who lead us into Division Two. Once there, not knowing quite what we should expect, the faithful gathered for the humdrum arrival of Barnsley early season. What we were served up was one of the most exhilarating afternoon's football I could remember seeing at the time. Masses of away fans on the Platt Lane benches, goals galore and new heroes (temporary as it turned out) in Parlane and Tolmie, the "New Kevin Keegan". Oh yes. Oh no. Oh well. 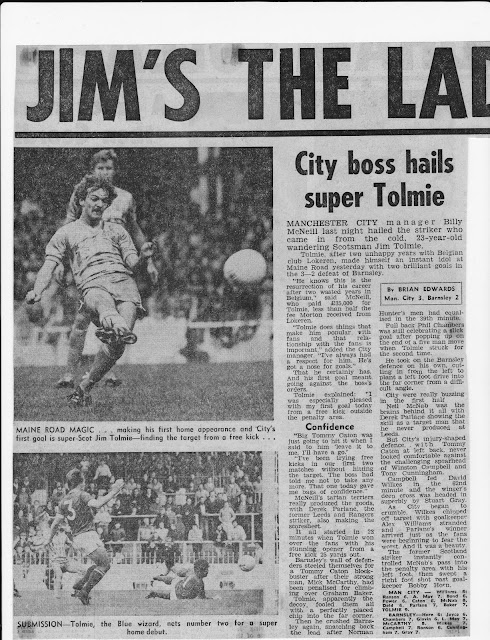 CITY 3 BLACKBURN ROVERS 2: Beating Blackburn 3-2 is neither unique, nor particularly spectacular, but the effort here (below) was a match of such verve and character, involving a good visiting side taking a 2-0 lead, then the classic comeback, that had the Kippax purring all the way home. A good sign is when you have lost your voice well before the hour mark. That David White's winner came sliced and deflected was of little matter by that time, as the dancing hordes on the old steps were well into that strange surge of noisy enthusiasm that often carries a team forward to remarkable exploits. A great day out that you somehow knew, once the momentum was with you, would end up just fine. 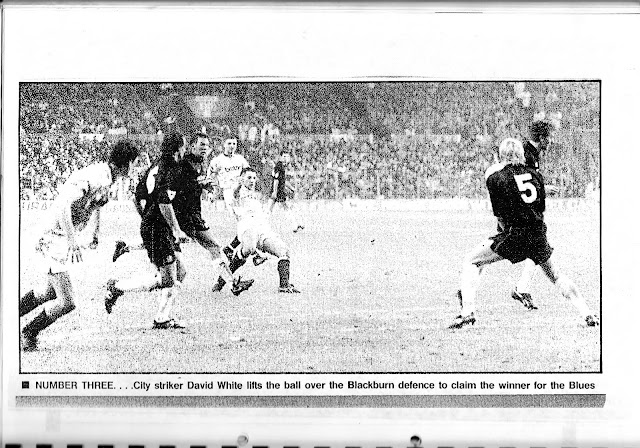 CITY 2 MAN UTD 3: Then there was this horror: a familiar foe, in ruder health than the malfunctioning combine harvester we now tackle toe-to-toe in 2012. This was The Days of Pomp, with the strutting French cock and the scallywag Keane at the height of their considerable powers. Still Big Niall gave us all hope, but hope in those days was a fragile beast and this was the kind of game that was never safe at two-nil with half of the game still to be played. It gave you the feeling that you wished we hadn't scored at all and - in fact - by the end and Keane's fist-shaking winner, you kind of wished you weren't there at all aswell. 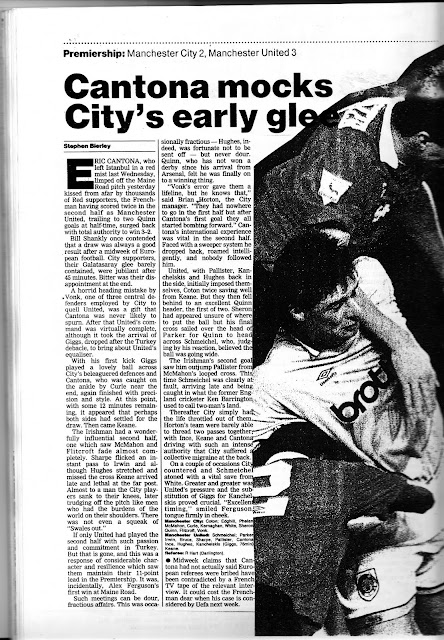 BLACKBURN ROVERS 2 CITY 3: Something about Blackburn Rovers we all like. I can remember more good times at Ewood Park than I can remember birthdays. Probably we are only talking four games, but they were all so soul-stirringly dramatic that I feel like I have spent half my life dancing the Darwen Quickstep. This was a rainswept soft-shoe shuffle, starring the twinkling feet of Paul Walsh, a mud-spattered Uwe Rosler and, somewhat curiously, the speed and guile of Nicky Summerbee down the right flank. Glorious simple relegation cheating days of yore, before life became complicated by Great Expectations. 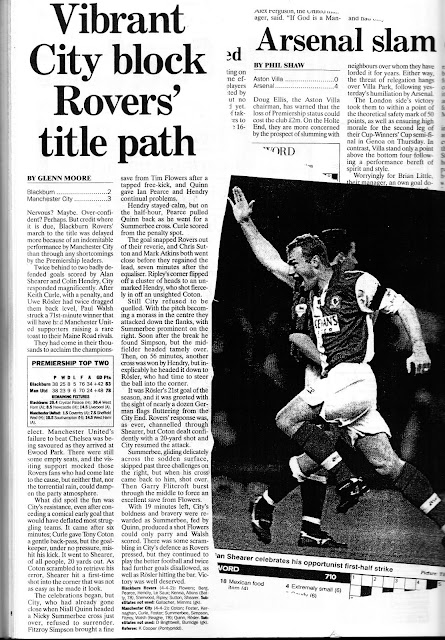 CITY 2 OXFORD UNITED 3: Then there was this. Great Expectations or not, nobody should pay to enter a football stadium, then be treated to something like this. Abject despair meets slapstick comedy, all in a night's work for Andy Dibble. With his shorts hoiked up higher than was decent and our voices straining towards falsetto, this was one of those evenings when the late night episode of the Sopranos would have been a far better idea. The beauty of football, of course, is that you travel in hope and you return in dismay, disarray and denial. On this occasion, the combination of those three sentiments would have been a warm comfort in comparison to what really happened. Still, the match lingers in the memory, along with many five goal thrillers and, if City continue as they have started this bright young season, there will be one or two more to store in the archives marked "nearly wet myself at the football tonight". 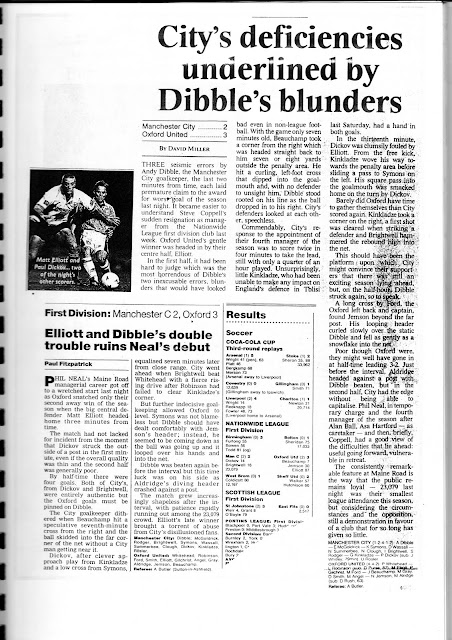 Posted by Simon Curtis at 4:08 PM No comments: Links to this post

2012 / 2013 presents some interesting challenges and poses some tricky questions, sticky trousers and interesting conundrums. So what do City face? How do you top the end to 2011-2012, when we all nearly died from the excitement? For a complete preview of the sky blue season, see the article "City Hit The Ground Running" by clicking here 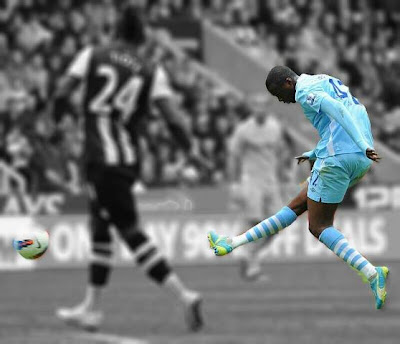 Posted by Simon Curtis at 12:27 PM No comments: Links to this post

HAZARD LIGHTS
Clearly, after a summer inflating himself with a bicycle pump, Eden Hazard is now so much of a gas-filled obstacle that he ended up performing in glorious isolation in the middle of the park a sumptuous silent tribute to the spirit of Johnny Bumstead. Tik-tak-a-ploof. A paltry contribution ended in the ignominy of substitution in front of many hundreds of small children offering him the traditional Mancunian hand gesture of considered consolation.

SECOND SEASON SYNDROME
Nasri and Tevez both look like they are ready to increase their sway on MCFC affairs this season. Nasri started slowly and grew into the game, Tevez buzzed until finally unleashing the shot of the day past a rooted Peter Cech. Promising beginnings from a striker who can be considered a new signing after his season off.

FINANCIAL DOPING
Was the way one punter described Rodwell's purchase. Prepare yourselves for the arrival of Twitter's finest brainless warriors. On first sighting, a useful addition to the squad, Rodwell joins a group that - on this evidence - is plainly good enough without any great additions being made. Chelsea must have been alarmed to see a less than full strength City side pass them off the park for the first half hour of the 2nd half when three ultra precise goals put paid to their promising start. That they finished just a goal adrift, they should thank their lucky stars.

COSTEL PANDEMONIMOM
Not the busiest of days for the tree-sized Romanian, but the one question that was asked produced a fluffed response, the big man going down like a block of flats and seemingly unable to move his trunk to a ball that was closer to him than the eventual scorer Ryan Bertrand. 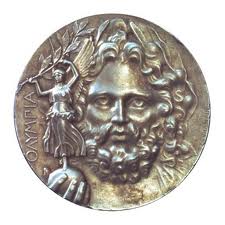 NOT JUST A BIG OBSTACLE
As stated over a year ago here a period in the New Year without Yaya Touré is already, at this unfeasibly early stage, not something to look forward to. It is a feat worth pausing over to match size, power and strength with agility, nimbleness and speed, but the big man does this with aplomb.

NEW IMPROVED KOLAROV!
Faster, more accurate, gets into the places that ordinary left sided raiders fail to penetrate. Or the same old Kolarov, used in a system that actually shows up his strengths rather than isolates him in no-man's land, lost somewhere between dangerous attacking opposition right winger and dangerous attacking right sided fullback?
Posted by Simon Curtis at 10:08 AM No comments: Links to this post

Manchester City chief Roberto "Rumbling Discontent" Mancini today stated that his team were "2nd, 3rd, 4th or maybe even 14th place" candidates for the Premier league title, the race for which - expected to be the most exciting ever (tm) - begins in literally days. "Ees like this," he explained, slurping noisily on a drip feed of Umbongo Multifruits attached to the handlebars of his new Manchester City bicycle. "You have to improve, you have to buy in May and June, not now. Now it is not so easy."

It is thought that Mancini named his desired players as long ago as last March, but the carefully hand-written list became mixed up with Chief Operating Officer Brian Marwood's own shopping list and, when Mancini returned from a two week stay on the island of Sardinia, he found to his disbelief that his desk contained five tins of Pilchards, a family-sized box of Golden Grahams and a jar of Hellmans. "The pilchards is easy. I give to Micah. The Grahams they are as useful as Rocky Santa Cruz," Mancini spluttered. "Mayonnaise, I take home for the pecorino sandwich."

It is thought that Mancini's working relationship with Marwood did not improve when he discovered a small almost illegible note with the purchased victuals "Ciao Roberto!" it declared "Enjoy the picnic. Sorry, no gherkins."

As a result of this administrative faux-pas, City meet Chelsea tomorrow with a relatively weak good-enough-to-win-the-Premier-League side, that may well be taken to the cleaners by refurbished-up-and-at-em-new-media-darlings Chelsea. It is thought that, without immediate and headline-grabbing activity in the transfer market this week, the national press will be forced to wheel out all the soggy prose that had been in grave danger of being consigned to the dustbin after City's title win last season. A spokesman for the Daily Mail said, "We are surprised it has come to this, but we are more than ready to report it exactly as we see it: a full-blown crisis.On the other hand, if City do pull their finger out finally and buy in some quality, we will revert to our Ruining Football copy."
Posted by Simon Curtis at 3:15 PM No comments: Links to this post