"If we are honest with ourselves, Everton come closer to how we see ourselves, or at least saw ourselves before recent unforeseeable developments, than most other top flight clubs. There has always been a kind of thinly stretched affinity with the Blues of Merseyside despite the scratchy accents and the omnipresent danger to the contents of your pockets. Living in the shadows of the local behemoth is a sad fate that befell both our clubs from the late 60s onwards, plus we have long shared both an instinctive hatred of the colour red and a hair-trigger, morose sense of humour born out of a million and a half wretched disappointments. As Liverpool and United have grown into all-consuming megaliths for the hordes of Sky neutrals, it is tough not to grow a little bitter and develop Rhinosaurus skin." 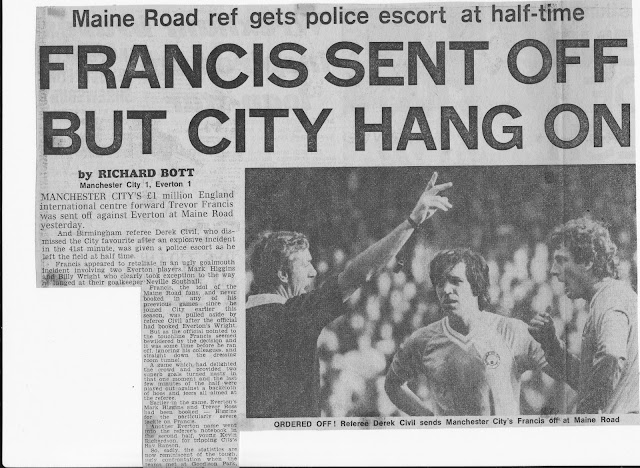 These words dribbled out more than a year ago. Today Everton are much the same as they have ever been: a club with true traditions, fervent support and down-to-earth principles, just how many City supporters have viewed our club over the many years of trials and tribulations before we fell headlong into that gigantic pot of honey.

The atmospheric stadium, the dark old church, the heaving paddock, the swaying Glwadys Street, scene of a thousand and one hyperbolic Gerald Sinstadt commentaries ("...and Whittle's done it!!!!"..."Latchford at the far post, oh my word!"). Too hemmed in by the crumbly tenements of the Scottie Road, none of this can be redeveloped into glistening executive boxes and corporate lounges. The Z Cars theme that still blasts out on match days, the girls with baskets of toffees, the perimetre advertising shouting things like Hafnia and Pukka Pies.

What do modern day Evertonians think? Here are three generations and their ideas about City, City and Everton and this weekend's game:

"For many years, Everton and City were two peas in a pod. The poorer relations within their cities, both tried to upset the established order with Everton making a slightly better fist of it over the years. However, a lot has changed in recent times and City now possess the sort of wealth that Everton can only dream about. The money has skewed the similarities with recent City managers doing their best to sour relations; few Everton fans would speak positively on Hughes or Mancini. The Lescott departure was acrimonious, to say the least, and Hughes irked a number of fans with his behaviour. Mancini has failed to endear himself to Evertonians with the Italian throwing sour grapes about whenever Everton get the better of his Manchester Millionaires. In spite of all that, and I'm using some kind of twisted logic here, Everton fans may think of City in a more favourable manner at present The reason for that would be Jack Rodwell. More than a few eyebrows were raised when Mancini came in for him. Despite showing glimpses, Rodwell's injuries were grabbbing more headlines than his football prior to his transfer. His progress had stalled and the money allowed Everton to sign the brilliant Kevin Mirallas; Everton easily got the better deal in this case. The money threatens to drive a wedge between two once similar clubs but the fact that you aren't United probably still applies for many."


Simon Hughes harks back to the Holy Trinity of Ball, Kendall and Harvey and has seen more Everton-City clashes than he cares to or indeed is able to remember:

" Everton visit Man City at the weekend in a fixture laden with nostalgia for fans of a certain age. Everton and City sparred entertainingly throughout the late 60s and 70s, fielding some great players, but ultimately falling short of sustained success. We left that kind of monotony to Leeds and Liverpool. For City and Everton disappointment lurks around every corner. Recent years have seen an unexpected upturn in City's fortunes due to the sudden influx of Arab money, whilst Evertonians have become used to the club trading to survive. Fortunately, under Moyes we have one of the few managers able to make continued progress under such constraints. This season City have looked fairly ordinary so far, but have the knack of winning, often late in games which I guess marks them out as champions. Everton, whilst playing well and creating chances aplenty, have failed to see out games they should have won. This makes the weekend's game particularly intriguing and will be a key test of whether the Toffees can challenge for the top four places. In order to get a result - and a win is possible - Everton will need Gibson back to patrol in front of the back four and Jelavic to find his shooting boots. Midfield looks well matched, with Fellaini versus Yaya Toure being top of the bill. Mirrallas back would also be a significant boost to the Blues and he should enjoy the space available at Eastlands. Unfortunately, the loss of Baines to a hamstring strain reduces Everton's progressive play considerably and a draw might be the best we can hope for. Expect to see City's strikers rotated again from the start and during the game, until they find a way through. Lescott and Rodwell are likely to remain absent friends, which seems particularly tough on the former. Everton to score first, with Dzeko netting a late equalizer for City. Or not. Who knows? I'll be thinking of those dark terrace streets outside Maine Road and whether footy really was better in the 70s"

Chris Dottie was brought up on a solid diet of 80s successes in the blue half of Merseyside. Then it all dried up. Everton-City means this to him:


"I think Evertonians feel a bit bereft nowadays, that they used to have brothers in arms. It helped that we normally felt like the big brother in my life time, that for all we had in common life was still that little bit worse for you. So we could share in the hatred for the famous reds that had stolen our cities in the popular mind and bitterly rant about how much better we deserved and how spawny and horrible and patronising they were. But at the same time we could feel a little bit patronising towards you, because you hadn’t often been much higher than us and you’ve often been quite a lot lower.

There were many shared players and managers, never any bitterly painful or violent games that stick in the memory – maybe because neither club had anything positive to play for during much of the past 30 years and we were never the ones to send you down. Away trips were a positive date in the diary because it was a short journey with little risk of physical harm and a possibility of getting points. The fans always very similarly minded as well – maybe a mixture of nature and nurture. The geographical proximity provides the natural link, that the fans are likely to be more similar in socio-economic and personality terms than 2 clubs from the other end of the country (especially during the 80’s when the North/South divide seemed widest). And we were both nurtured by a traditional, respected, historic club that was perennially unsuccessful and so held no appeal to glory hunters. No surprise that we felt that the supporters of both clubs were cut from the same cloth.

So until City attracted investment there was a lot to like and little to dislike. After that, things have changed to a large degree. Our erstwhile wingman has found he can get into the high-end nightclubs and flirt with the Champions League totty, leaving us with our pint of mild in the social. There's a bitter element to the jealousy because it seems down to luck. Why buy City and not Everton? Because City have a stadium. Why do City have a stadium? Because the Commonwealth games was in Manchester. Not your fault but not our fault either, and a real “Sliding Doors” moment, almost up there with the impact of Heysel on Everton’s recent history. Neither club seemed to get a break, then you won the lottery.

I still think there is a lot more affection from Evertonians for your club than for the rest of the rich and famous because the feeling is that most of the fans haven’t changed. But power corrupts and your managers have really driven a wedge sometimes, not just with signing our players but with comments about styles of play and sizes of clubs. Sometimes it feels like the club is forgetting quickly where it came from.

Your best mate wins the lottery and you celebrate like hell while he’s sticking it to “the man” and flying the flag for the previously ignored. If he then becomes “the man” and acts like winning the lottery was down to good judgement, the distance starts to grow. That’s where are paths are diverging and the brotherhood is becoming a pleasant nostalgic memory."

Thanks to Luke, Simon and Chris. May there also be a pot of honey at the end of the rainbow marked "Toffees" one day, for as sure as many football fans wished us well when our luck turned, I can't imagine too many begrudging the blues of Merseyside a go on the ride as well at some point.