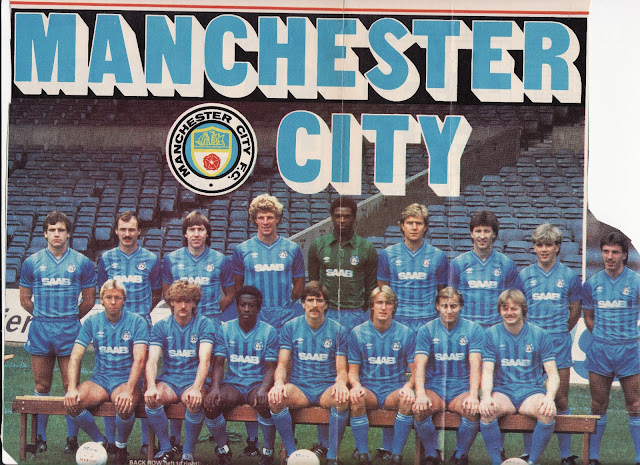 30 years ago, Manchester City were embarking on a pre-season tour with a smart new
manager and shiny new members of staff in place, bright new kit, exotic new players arriving from far-off locations (well, Morton) and a sizeable new challenge staring them square in the chops. The story of 83-84 mirrors the beginnings of Manuel Pellegrini's reign at the Etihad more closely than one might expect with its alluring uncertainties and its feel of the Big New Beginning.

PART TWO: Goals, Drinks on the Prom and Cambridge United

In 1983 Manchester City was a totally different beast to the one that parades trophies in the rain in Hong Kong and throws something to the tune of 86 million pounds at its summer purchases. Despite this, there are some spectacular parallels to be drawn between the pre-season that faced then-new manager Billy McNeill and his squad with that of Manuel Pellegrini in 2013 and none of them involve jokes about Jimmy Frizzell.

City were preparing for life in the 2nd division, with early season opponents Crystal Palace, Barnsley and Cardiff  the initial barriers to leap over in a brave new world of low budgets and even lower expectations. After a dreadful 1982-3 season and a laughable exit from the top division at the hands of Luton Town, supporters and club officials alike were shell-shocked to be down with the massed might of the Uniteds Cambridge and Carlisle.

Despite a threadbare budget and a newly installed management team, expectations were that City might just be capable of providing some sort of a meagre challenge to the big guns of the division: Sheffield Wednesday, Newcastle United and Chelsea.

City's pre-season took in a picturesque tour of the quaintest teams in German amateur football. Whether this had been designed with confidence-boosting run-away wins in mind or not, the effect was just that. new signings Derek Parlane, Jim Tolmie and Neil McNab were given their debuts and the Blues embarked on a magical, goal-strewn lap of the Vaterland.


City would manage to score four goals, something missing from the previous campaign almost completely, on each occasion they took to the field, including a tally of six to round off the German part of the tour against a then lowly Wolfsburg side.

To keep things looking tidy, four were also scored when the Blues crossed the border into Holland to finish the tour against Willem II in Tilburg. As well as boosting confidence, this continental goal fest cemented the faith of Jim Tolmie in his own ability, helped Parlane realise that he was not on the soccer scrapheap and re-launched McNab's career as a useful ball-winning midfielder. All three would start the season in fine form back in England and McNab would go on to represent City for six years, making 266 appearances. 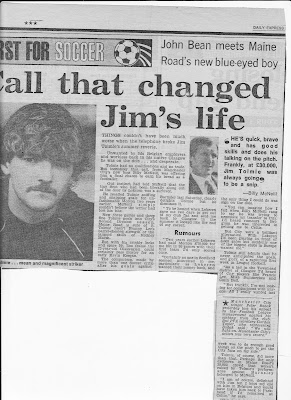 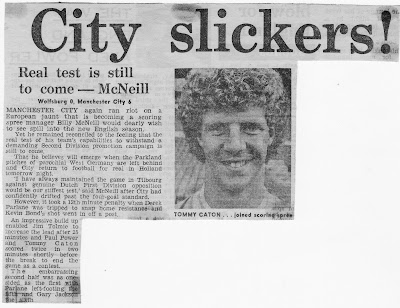 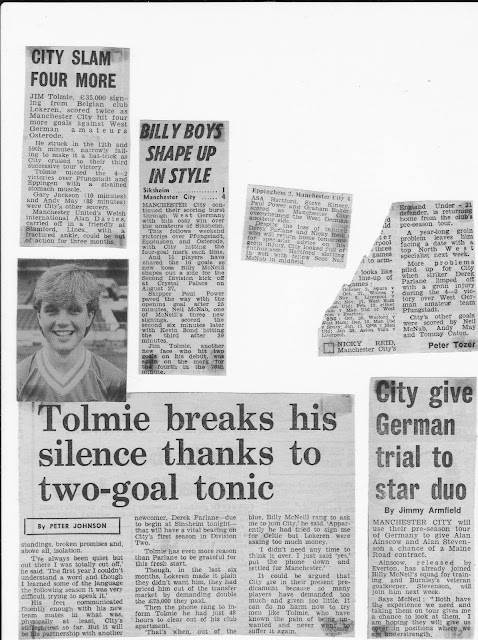 By the time City returned home, the season was almost upon them. There was just enough time for an ill-fated trip to the seaside where they lost their unbeaten summer run in Blackpool and lost Bobby McDonald and Peter Bodak to a late night session on the Golden Mile, the first of several headaches for Billy McNeill in that first season down in Division Two. 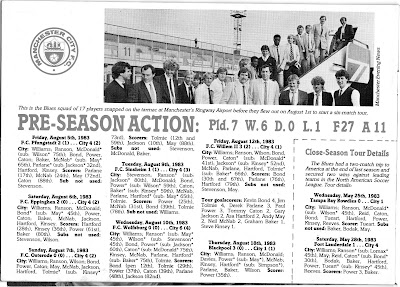 City would eventually finish the season in a limp 4th position, scraping home just ahead of Grimsby and Carlisle United and well behind the afrore-mentioned big three, but would be promoted on a wave of adrenaline the following year against Charlton in a never-to-be-forgotten final game of the 84-85 season at Maine Road.

McNeill's tenure was short but eventful. Whilst Manuel Pellegrini's pre-season with City has seen fewer wins than 30 years ago, it represents a similar starting point to that encountered by the Scotsman thirty years ago.

The Chilean with the Italian background will at the very least hope to be associated with Billy McNeill's long-time nickname from his imperial years as Celtic's skipper and serial trophy wielder: maybe after 30 years of false dawns and fits and starts, it is time for a new Caesar to build his empire on the banks of the River Irwell.
Posted by Simon Curtis at 12:53 PM