IN APPRECIATION OF SERGIO AGUERO 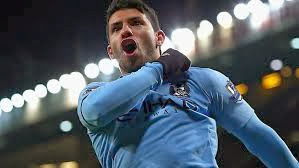 Those of us long enough in the tooth to remember watching with mesmerised pleasure the forward play of Francis Lee, Neil Young, Rodney Marsh, Mike Summerbee, Dennis Tueart, Peter Barnes, Brian Kidd, Uwe Rosler and in more recent times Shaun Goater, Nicolas Anelka, Shaun Wright Philips, Carlos Tevez, Bernardo Corradi and a host of lesser mortals, will sleep easy at night knowing there is always a shot, a header or a gently billowing goal net to send us into our dreams.

Or an air guitar riotously celebrating your only meaningful goal of the season. Dreams can turn weird sometimes.

Unless I am mistaken, however, City's current side - heavily endowed as it is with attacking intent, bristling as it is with such fulminating power and gossamer delicacy - is home to perhaps the greatest forward the club has ever employed, a player of such athleticism, professionalism and potency that this season's goal tally already outranks that of Tottenham Hotspur, the team still nursing its bruises from meeting him and his team mates in such coruscating form at the weekend.

Sergio Aguero, in his present incarnation, must be tantalisingly close to the very top of the football tree right now. Praise is due to the ferreting work of master digger Fernandinho, the blossoming partnership with Alvaro Negredo, the supply line - constant and inch perfect - from Silva, Nasri and Navas, the bombing distractions of Yaya Touré and Pablo Zabaleta, but up at the pointy end where the tackles are flying and the elbows are constructed from steel and iron, City possess possibly the most potent attacking force seen on either side of the Manchester divide for many a long year.

Drifting back 24 hours to the Tottenham game, still fresh in the mind with its vivid colours and sharp vital smell of sweat well spent, the 47,000-plus at the Etihad were treated to a masterclass from the stocky Argentinean. What he delivers to a football pitch appeared so far beyond the likes of Dawson and Kaboul to counteract, they might as well have been fashioned from papier maché. Indeed at times it seemed as if they were. One decent burst of rain and they would have been completely finished.

Aguero, low to the ground and built on legs that could belong to a Mongolian horse wrestler, is apparently almost impossible to knock off the ball. This power and low centre of gravity, allied to a close control of the ball that is second to none, reminds the casual observer of his countryman Diego Maradona. Who will ever forget the Mexico World Cup of '86 and those trademark slalom runs over wild scything tackles? Maradona carried Argentina to the world title that year, through sheer force of character, will power and edge of the seat skill and bravery. This heady package would well apply to Aguero too, a modern day reincarnation of his countryman's physique and ability to hold possession amidst the most horrendous buffeting from the sport's less well endowed.

There is a speed off the mark, the first milliseconds of which take place inside the mind, that allows him to leave his marker completely for dead. Once caught, if it is possible to do so, try to dispossess the whirling feet of the ball, by foul means or fair - and Spurs quickly realised that their best, nay only, chance of success was by the latter, and see where it gets you. In Dawson's case, flat on his backside. In Kaboul's, facing totally the wrong direction. In Walker's, gulping greedily on the thin air left behind.
An icy breeze tickled their cheeks. He has gone, accompanied by the roar of the crowd and all you can do is bask in how oafish you look.

The touch with his left foot to divert Navas' quickfire cross past Hugo Lloris in the Tottenham goal for City's third yesterday was the work of a man supremely confident in his ability to dispatch the ball, any ball, into the net. The ball was smashed across at speed, two defenders had the chance to do something about it but failed, leaving Aguero with a split second to rerarrange his feet, change his body position and get some sort of meaningful connection on the ball. It skimmed lightly off his instep, the only touch that would do the job, and slipped diagonally past the wrong footed keeper. Sublime artistry at breakneck speed. Made to look like a stroll in the park.

But this, as we know, is not nearly the whole story. Watch any passage of loose play in midfield and look for the so-called superstar striker, digging in, chasing back, involving himself in the blur of one touch passes that carve out a new passage of possession for his team. No, prima donna goal hanging for the league's top scorer. No ghosting into special positions to pick up the crumbs for this man. Sergio Aguero plays a full and energetic part in shaping the chances that often culminate on his own toe end. 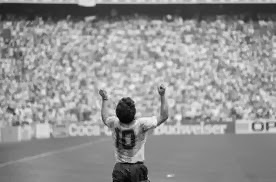 Football is a team game. Some players rise above this to elevate themselves to another level. Yet others, and there are very few of these, manage to stand out whilst remaining an integral part of the whole. For this, Sergio Aguero, we salute you, a truly outstanding footballer in an outstanding team.
Posted by Simon Curtis at 2:49 AM