As we wait with bated breath to see whether Danny Welbeck will make his debut for Arsenal against City this weekend, the match between the sides at Maine Road in March 1980 marked another striking debut, that of Kevin Reeves, a mobile young striker just capped by England, arriving from Norwich City for the then princely sum of *£1.25m.

Reeves was to save Malcolm Allison's skin, as his second spell in charge was beginning to look a little like a slightly miserable car crash. As with many things around this time, the plan did not go according to the author's will. The signing briefly made City the first side to have two million pound players (Steve Daley the other), but Reeves' debut proved to be a disaster, Arsenal running out easy three-nil winners, catapulting City into a desperate fight against relegation, which would only be resolved two weekends before the season's culmination with a 3-1 win over Bristol City. Ironically, one of the goals in this comfortable win would be scored by Michael Robinson, the very epitome of Allison's profligate second spell in charge.Allison would survive through to December of the following season without any discernible improvement, before making way for John Bond.

The City programme for the Arsenal match sets the scene, whilst the following week's programme v Bolton carries photographs from Kevin Reeves' debut. Allison's musings that "this will be the last one million pound transfer in this country for a very long time" did not come true. Within a short time the likes of Ray Wilkins, Andy Gray, Justin Fashanu and Bryan Robson would join a growing trend.

*City part-funded the purchase with a £175,000 sale of misfit Bobby Shinton to Newcastle United. The previous week, Allison had also brought back Dennis Tueart from New York Cosmos for a second spell with the club. 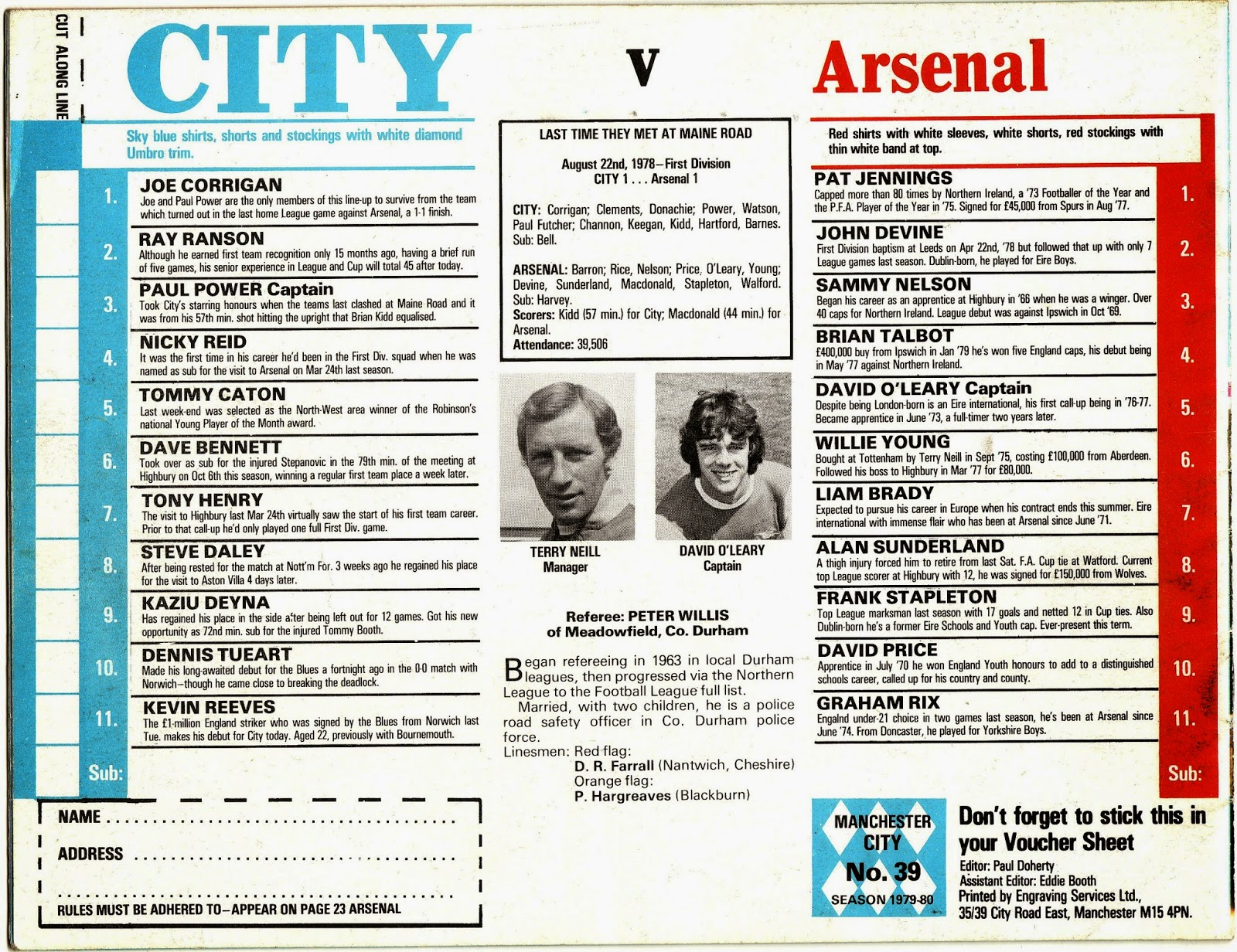 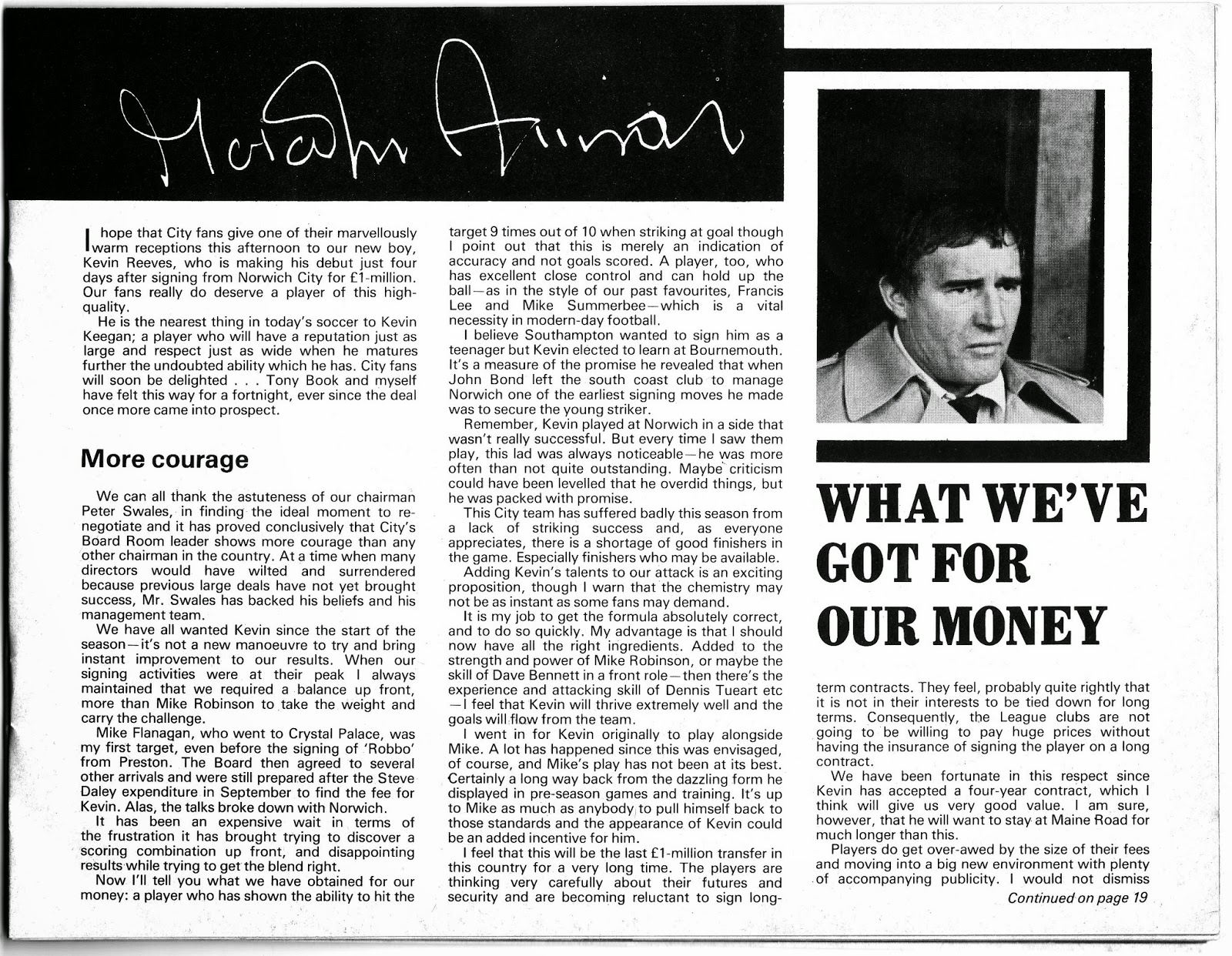 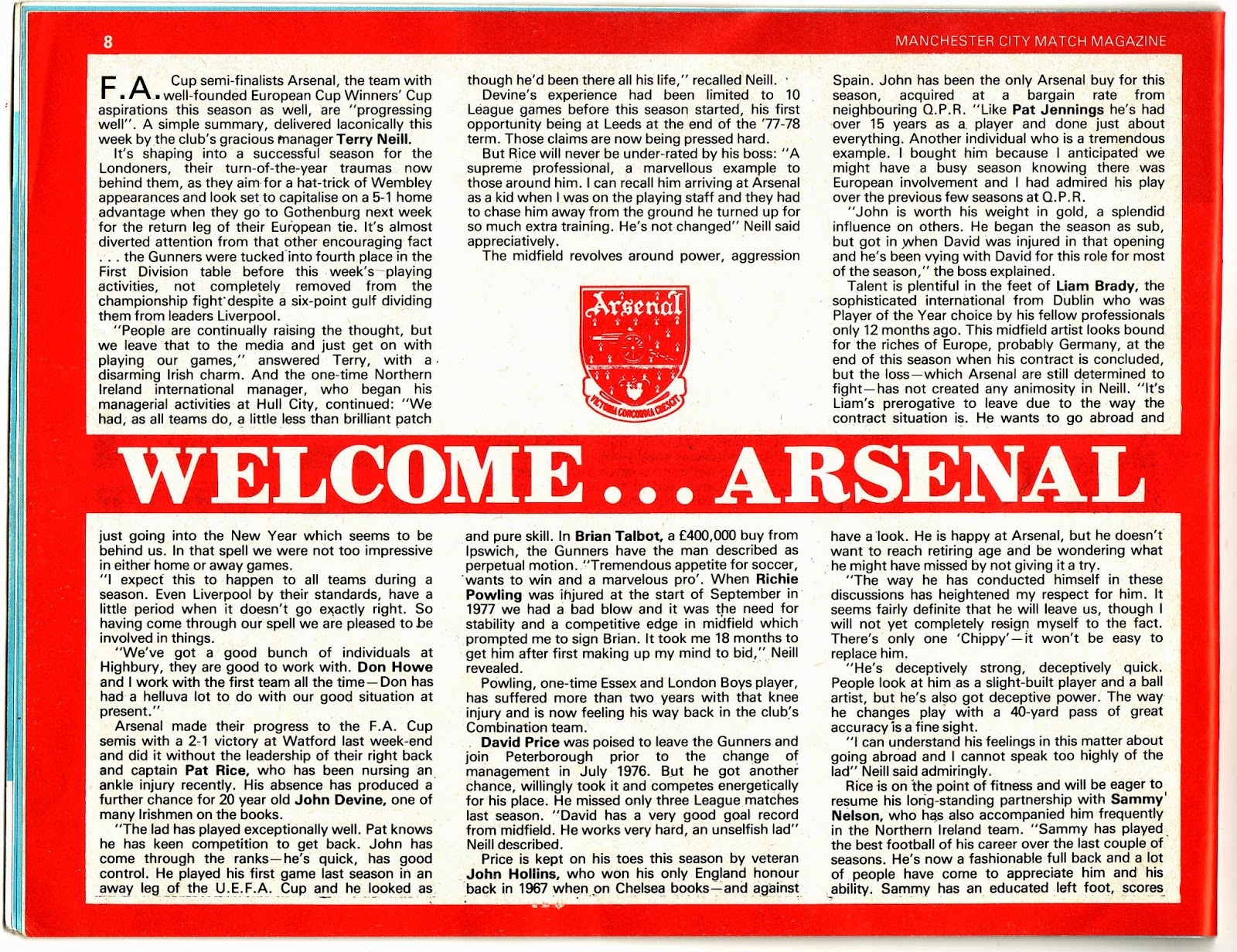 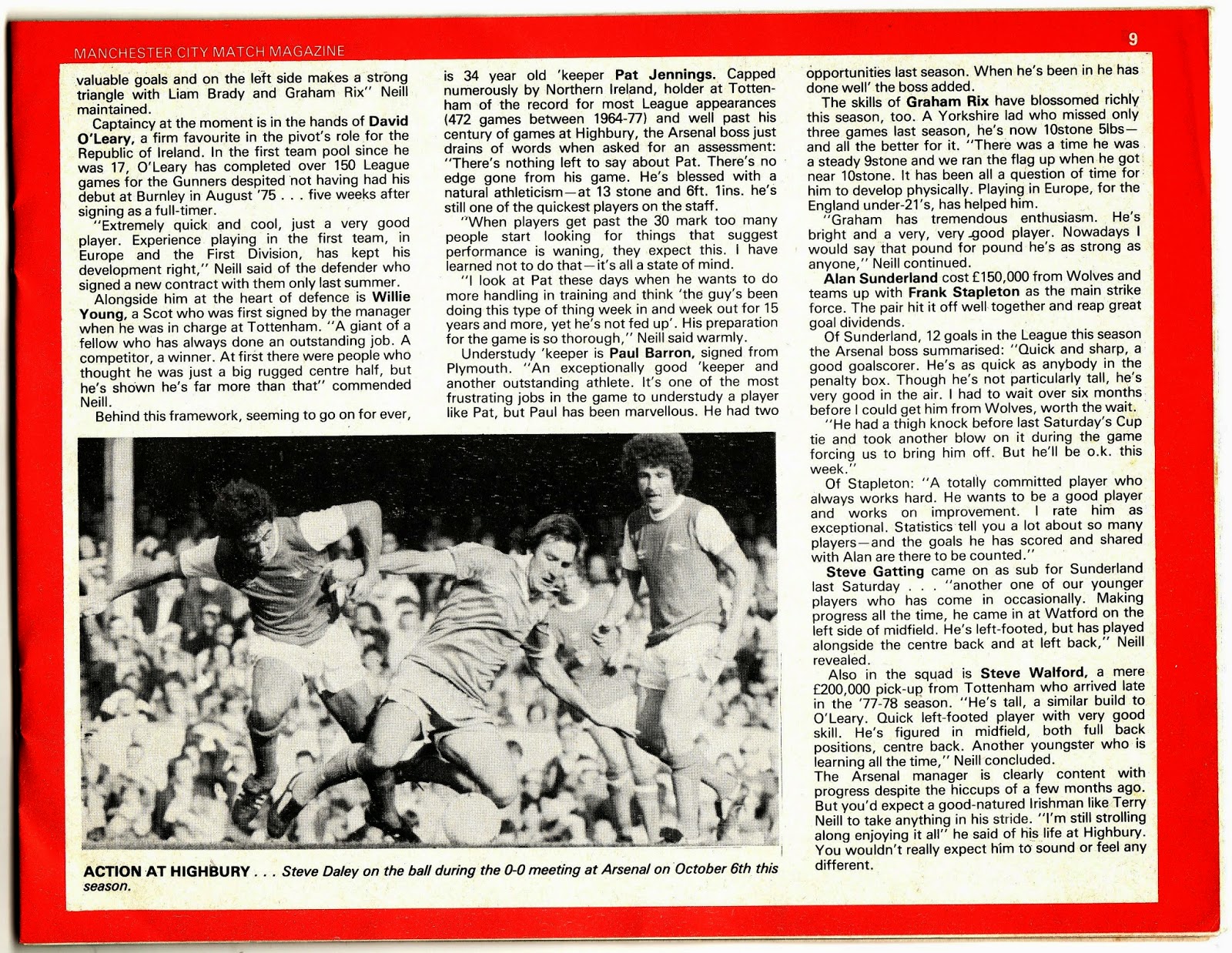 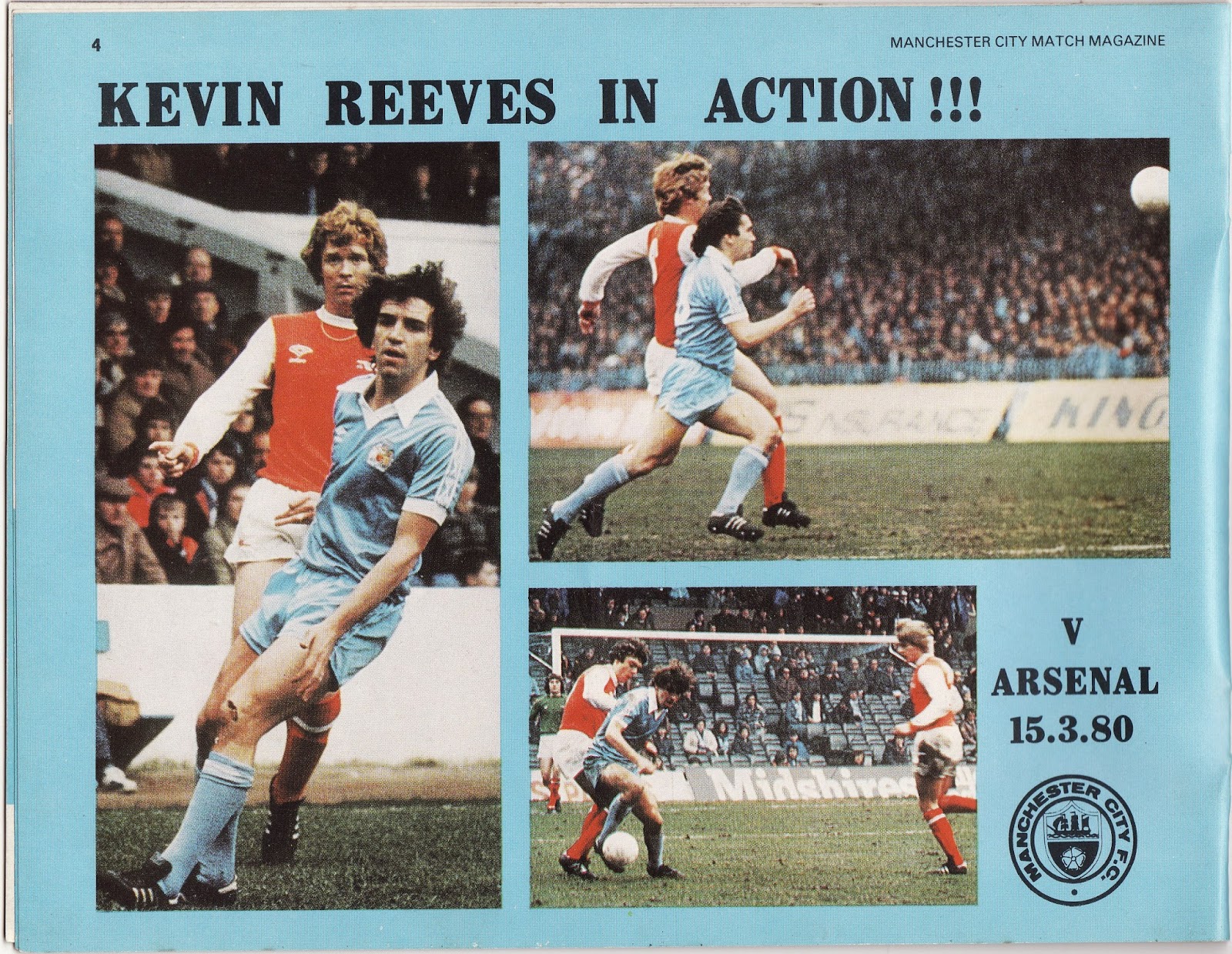