THREE MEN IN A BOAT 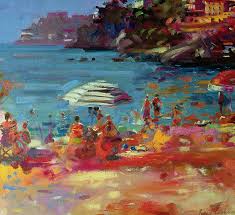 When is a two goal deficit an absolute thrashing?

It’s a question that probably troubled Plato, Kant nor Confucius unduly, but nevertheless it’s one that was rebounding around the precincts of the King Power Stadium on Saturday with impressive velocity.

City, finishing with an Aleksander Kolarov-inspired flourish, had reduced a four goal difference to two. However, anything that needs inspiration from Aleksander Kolarov in his present mind-set, is in significant trouble. Kolarov started the season as a surprisingly, if momentarily, adept mini-clone of Franz Beckenbauer, back in the sunny days of autumn when Pep Gaurdiola could pull rabbits out of people’s hats and produce playing cards from behind Dimitri Seluk’s luxurious alpaca-wool collars.

For those that dote on pain, who dote on the pleasure of the absence of pleasure, not smoothness but conflict, there is quite a party warming up. The word fraud is banging about under the clouds and it won't go away. Just where do City take it from here, with their multi-million pound defenders that look like they are running through custard with breeze blocks strapped to their backs?


Since that beguiling start, the Catalan has come face to face with what is commonly termed “The wet Tuesday in Stoke factor”, the wonderfully British concept that you just can’t beat the Premier League, with its idiosyncratic Anthony Taylors, its hurricane-force football, its sweary, fully-committed crowds and its blustery push and shove. You cannot, as a self-aware foreigner in jet black knitwear, simply swagger in and take control of the whole glorious landscape with a nonchalant wink tot he ranks of pressmen and a shrug of those continentally sloped shoulders.You can't sip non-committally from your distilled water bottle as a hitherto eunuch-infested Leicester are striding through your defence like silverback gorilas on heat.
A proper Premier League apprenticeship will include a grilling from a hostile press, who are beginning to think you’re not the real deal, humbling experiences at odd places where the locals bang plastic clappers together ferociously and have their eyes positioned too close to each other and others where they boo some of your players with the fervour of a pitchfork mob looking for witches to burn; a thick pall of crisis is thrown over everything you try to do. Your desperate fate will finally be sealed when a man you have never heard of called Spam Collymore appears to shout you down with discordant words and pointy fingers.


It may also rain quite a lot on your days off. There will be baked potatoes overflowing with baked beans masquerading as meals. People will find your shoes effete.
Señor Guardiola has reached this junction. There are signs for Purgatory County, for nearby Ignominious Retreat and, still there, but a little bent and scorched by the wind, one for the village of Little Redemption.


Where Pep’s Reliant Robin turns next is anybody’s guess. In a way, unmapped scurrying has always been a temptation too far for Manchester City, so there can be no great surprise that – even with the world’s greatest coach at the helm of the Good Ship City -- it continues to buck on the high seas like something about to head swiftly and incontrovertibly for the seabed.
What Pep Did Next is a book yet to be written, but you can bet your bottom dollar this chapter of bullet ridden cars and twisted corpses in the street will not last too many more pages. January will open windows and the fresh air of winter will blow all over us and sharpen our senses. Some of those impressive athletes sliding haplessly around at Leicester at the weekend, will be receiving bad news with their Christmas cards. Those manning the backlines in their own irrepressible way over the last few weeks will fear the postman’s knock most. Messrs Otamendi, Zabaleta, Kolarov and Clichy would do well to stay well away from the letter box.


Seldom has a team with so much star quality managed to defend like an under 10s eleven after eating too many bags of peanuts. The spots in front of their eyes are real enough. The gaps too. The sound of gnashing teeth is real as well. In fact the only things that seem unreal are the early season reports praising them all to the skies. Kolarov is not Franco Baresi after all. Gael Clichy is still trying to pass to the moon. Zabaleta, bless him, is not Pavel Nedved, nor anymore, is he a rugged modern copy of Tony Book. At Leicester in fact, he played what looked dangerously like a farewell concert. Yaya Toure is no Edin Dzeko and Nicolas Otamendi is not a full cup of tea.
Pep must now make his mind up. The tinkering has brought us so far. It has been fun, and then not so much. It has opened eyes but now it is opening them too wide. The man whose teams  have conceded  7 defeats (Barcelona 08-09), 4 (Barcelona 09-10), 6 (Barcelona 10-11), 4 (Barcelona 11-12), 6 (Bayern 13-14), 9 (Bayern 14-15) and 4 Bayern 15-16) has already conjured 5 in early December as a first effort in Manchester. To stop the rot, he may well have to ask Txiki for yet more pocket money, but if it helps avoid the necessity for a Clichy-Otamendi-Kolarov axis of evil against 53-goal Monaco in the Champions League, we will all breathe a sigh of relief.

Posted by Simon Curtis at 10:42 AM No comments: Links to this post

TENDER IS THE NIGHT

The great noises of football rang out at the Etihad. Grunting, chafing and wailing, mainly.

The smell was of burning rubber. Whether this emanated from the tyres of Antony Taylor's getaway car - revving like a lunatic infront of the City superstore - or the pile of used Goodyear Ultra Grips being prepared to put on his tribute bonfire further up the concourse was unclear.

A four point lead had been gained by the visitors, but it had been a match that could quite easily have delivered City their first home league win in four attempts.

After three slovenly 1-1 draws with Southampton, Everton, where the Dutchman Stekelenburg had the game of his life and a Middlesbrough side, which had spent the first 65 minutes shuffling about infront of their own penalty box, City had now more or less gifted a serious title rival three points. It came in a small sequinned box with sky blue ribbons on it. Inside - you imagined - Antonio Conte and his willing young men might find the rest of Nicolas Otamendi's brain, a sprig of heather and Gael Clichy's allegorical novel "How To Pass To The Moon".

Chelsea, lest anybody be fooled, are a tenacious and well drilled unit under Antonio Conte. Their midfield terriers are excellent and in Victor Moses, they had an outstanding, if slightly surprising, man of the match. The winger played studiously as a full back and was the Johnny on the spot time after time to block, clear or nullify a variety of potent City threats.

Those threats had come streaming down the flanks, where Jesus Navas linked well early on with Kevin de Bruyne, speed of foot and lightness of touch taking them away from flashing legs. On the opposite flank, once Leroy Sane had cleared his brain of surprise to be playing, he too cast aside his jittery start, opening his thighs and showing his class, as David Coleman might once upon a time have said.

Oddly, it was De Bruyne's profligacy and selfishness - charcteristics not usually attributed to the Belgian - that would turn the game rapidly and completely in Chelsea's favour in the opening scenes of the second half.

With "Anthony Taylor of Altrincham" showing up strongly in the first half for the visitors, City may well have felt slightly hard done by. Certainly the wall of opprobrium shifting gaily down the stands towards the hapless man in black might have confirmed for him that he was having a particularly short-sighted day. If refereeing is about flow and control, vision and understanding, Taylor was revealing a blind river vole's grip on such skills out on the park.

David Luiz's obvious body charge on Sergio Aguero might have gained a free kick on another day and possibly a red card from another official, but here it merited only a shrug and a look of oranges, lemons and plums from the official. When Aleksander Kolarov attempted something similar on Eden Hazard later on, he was shown an immediate and friskily demonstrated yellow card. Nicolas Otamendi, starting authoritatively, but soon to descend the rungs to danger level defending, also received a yellow from the suddenly fussy official for a perfectly clean tackle in the first half.

"Just about deserve the lead at half time, but Anthony Taylor is a constant threat for them" - Ric Turner on Twitter


For a moment Taylor stood over him in savage triumph, not the tiniest pang of doubt pulling at his taught features. He was at once master of ceremonies and harbinger of good news. The messenger with the bald head. You felt, even if you sloshed a pail of freezing water in his face, he wouldn't wake from his exultant reveries.

Despite this, City were making decent inroads and, as the half finished, finally got some reward, as Navas's dangerous centre looped in off the unfortunate Gary Cahill. Marcos Alonso, so long so strong on the left flank for Chelsea, had stood off Navas just enough to allow his cross to make it into the box.

The match swung on two elements at the beginning of the second half, one unusual, the other painfully familiar: First De Bruyne was central in spurning two gilt-edged chances. With Sane driving forward through the middle, he set the Belgian free and advanced into the box for the simple cut back which would have been side-footed home. Instead De Bruyne shot inside Courtois' near post and his countryman saved.

Even worse was to come as Navas outpaced Alonso and centred brilliantly but at pace. De Bruyne's outsretched foot reached it but the pace of the delivery took his simple side-foot high onto the upper part of the bar and away for a goal kick. It felt just a matter of time before City wrapped the points.

Instead, a useful onslaught exploded into bits.

Within seconds, Otamendi had been royally dealt with by Diego Costa and Chelsea were level. One on one, Costa dealt with his defender like a fat child unwrapping a KitKat after a difficult hour without snacks. A second aberration for the Argentine came straight after, as the same player turned him like an ageing tango partner and set up Willian for the second. Otamendi displays simple principles of dive and thud, frequently containing therein his own doom, written in stark capital letters. Here they were again, this time in neon for effect.

A match that was in the palm of their hands now rested in Chelsea's back pocket.
Posted by Simon Curtis at 9:25 AM 1 comment: Links to this post