THE DAY ALLISON TOOK HIS LEAVE FROM THE KIPPAX

"John Bond's cup runneth over, but Malcolm Allison's remains as dry as a bone..."
So went the opening line of Colin Malam’s pithy match report for the Sunday Telegraph in January 1981.

The match of some considerable drama that had just been completed on the soaking wet Maine Road pitch, between Manchester City and Crystal Palace sides as evenly matched as this weekend's fixture appears to make them, had finished 4-0 to the home side. It was to be the beginning of a legendary FA Cup run that would take in never-to-be-forgotten matches with Norwich (an uproarious six-nil pasting), Peterborough (with 28,000 packing the 4th division club’s old London Road ground), two mammoth quarter final ties with Everton, played out in front of an aggregate crowd of well over 100,000 people, and a semi final with the then all-conquering Ipswich Town, who had been on route for a treble of trophies before being sent packing by a dogged City performance at Villa Park.

The final with Tottenham, the centenary FA Cup Final would also be drenched in sweat and drama, but – at this point in January -- that was still some four months away.

The reason for the autumnal change of management at Maine Road in 1980-81 was on this occasion sitting in the dugout not ten metres away from where ex-Norwich boos Bond and his assistants John Benson and John Sainty (the beknighted "Three Johns") were busy arranging their sheepskin coats and flasks of coffee.

The incumbent of that small plastic and steel arrangement in front of the Main Stand had in fact only just sat down, having spent those typically tense pre-match minutes striding out across the Maine Road mud towards the heaving Kippax terraces on the opposite side of the ground, to take the adulation of an expectant and thoroughly wound-up 39,000 crowd.

If ever there was a game that required the hackneyed you could cut the atmopshere with a knife, it was this one.

The 3rd round tie between City and Palace that set up the run to Wembley 1981 was not so much a game about the two clubs but a deeply intriguing look into the psyche of the two managers. What made them tick, what made their relationship so unique, how they had come to be on opposite sides on this grand occasion.

City, under the atsute management of Bond, had taken off – pilfering 20 points from a possible 26 in the league since his arrival the previous October. The side that he had inherited his opponent on this occasion had been at its lowest ebb for some time, with debilitating cup exits at Shrewsbury and Halifax still very clear in the mind from the previous two seasons.

Back down at pitch level, the Kippax was still in a tumult. It was difficult to remember an opposition manager having the gaul to walk arms aloft towards the centre circle, clapping his hands ostentatiously above his head and receiving exactly the same back from the mass of hands and faces staring back at him from the great swaying steps. It was one of the moments of the decade at Maine Road, an unforgettable sight and an unforgettable moment that sent chills down the spine.

It was later captured in the ultra intrusive Granada TV documentary CITY!, a crushingly honest look at those last barren days of a City managerial career that was utterly doomed.

The exclamation mark after the club’s name in the Granada documentary has never really gone away. It would have come as very little surprise during those 70s and 80s of self-inflicted carnage to see City appear on the results boards as Manchester City!, so serpentine and entangled had the club’s attempts at normality become.

The man in the middle of the pitch with two minutes to go to kick-off was of course Malcolm Allison, sacked by City’s genius chairman Peter Swales, the used television mogul from Altrincham, just two months earlier. The very same Allison, who had been mentor to John Bond from their days playing together at West Ham United in the 50s and still the larger than life character that City fans had grown to love and respect for the drama-laden trophy years he had brought to Maine Road between 1967 and 1970.

Allison it was, as a pupil of the magnificent Hungarian national side of the 50s with its strutting Puskas and twinkle toes Hidgekuti, had introduced to City's training regime elements that would - thirty years later - earn Arsene Wenger wide-eyed plaudits at Arsenal.

Under Allison's 1981 regime, however, a succession of terrible results had brought the famous coach's City tenure to a sad end. A chaotic three-nil home defeat to Liverpool where Allison inexplicably told his players to choose their own tactics to face the champions and a dismal midweek loss at Elland Road against an equally appalling post-glory Leeds United led chairman Peter Swales to pull the rug from under the coach's expensively clad feet.

Football is a game that seldom stands still and – as Allison saw the thousands of hands returning to their pockets on the Kippax -  he made his way back towards the Main Stand, where the teams were about to enter the fray and the various elements of the coaching staff were jostling for pseats in the tiny dugouts that predated today's sponsored aircraft seats.

As he did so, the crowd rose again, an upswell of noise from the Kippax telling Allison in no uncertain terms that his moment had now come and gone, that he would forever have a place in the hearts of the faithful but that now he was here as Leader of the Opposition. 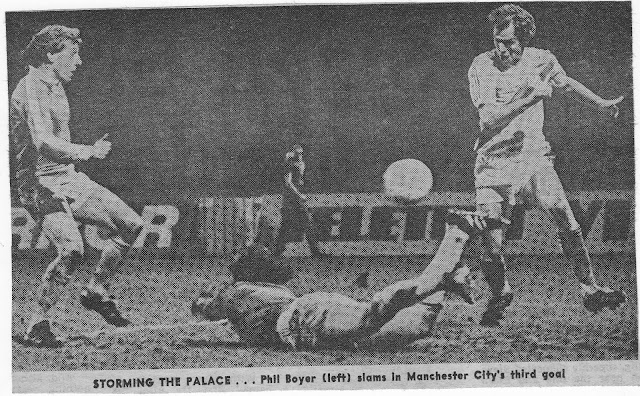 Suddenly a chant rolled down off the great terrace behind him, creating one of the most poignant moments in what was the beginning of the twilight of Allison’s career as a respected coach."Johnny Bond, Johnny Bond, Johnny Bond," was the repeated refrain as Big Mal wedged his frame wistfully into the tiny dugout.

His face was stretched and his eyes carried a sad glaze as he made himself comfortable. He would take Palace down to the second division at the end of the season and would later lead Middlesbrough in an ill-fated spell in the North East


His Palace side on this occasion, beaten thoroughly by his old love Manchester City, managed by his old pupil John Bond, must have left Allison with one of the saddest memories of his late career. The feeling that his life at the forefront of British football was coming to an end must have been horribly tangible for a man used to making things work so effortlessly.

As Malam had written in his post-match report, Bond’s cup ranneth over, whilst Allison’s remained dry as a bone. What delicious irony that would have been to Allison, the original Dartford gunslinger, of champagne and bunny girls fame. Few were the occasions that Big Mal’s cup was anything other than full to the brim.

The cup run, from Palace, via Norwich and Peterbough to Everton and Ipswich. Halcyon days.