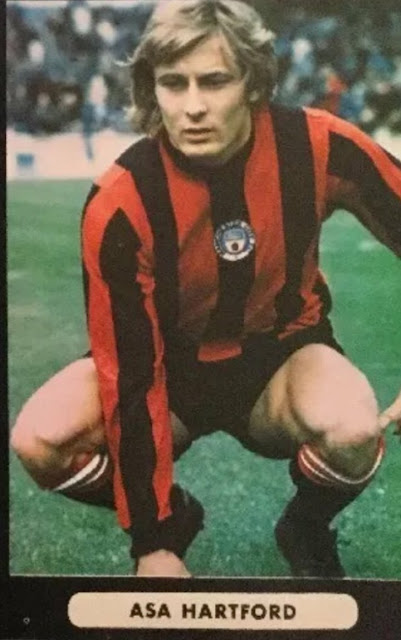 Asa Hartford is one of the very best midfielders to have worn the sky blue shirt of Manchester City.

A terrier in the tackle with indefatigable spirit and a great eye for a pass, he represented the all-round midfield package in an era when every club had its geniuses and lynchpins in that section of the pitch. None of those built for skill in the 70s and 80s will have come off the pitch having faced the Scotsman in City's midfield without checking their legs and other body parts for bruises. Hartford was stocky and tough, solid on his feet and swift in his cutting runs forward. Built from solid Clydebank stock, he would go on to represent Scotland 36 times whilst on the books at Maine Road out of a half century of caps in total.

Hartford weighed in with goals too, often crisply struck efforts from outside the area, and was the pivot around which two separate eras of very different City sides were built.

His debut came in the opening fixture of the 1974-75 season.

Having represented West Brom against City in the 1970 League Cup final (he would play for City in the successful 76 final against Newcastle), Hartford arrived at Maine Road after a transfer to champions Leeds United fell through on health grounds. His medical had revealed a slight heart defect and Leeds decided to call the signing off at the eleventh hour.

The Yorkshire club's loss was to be City's huge gain.

The opening fixture was against West Ham United, in those mid-70s days often considered a soft touch away from the tight confines of their own Upton Park, where the majority of their typically neat and tidy victories tended to come. The Hammers travelled north with a squad well packed with talent, however, including Frank Lampard, Trevor Brooking Billy Bonds and Clyde Best and on a sunny August day were expected to be part of a well-balanced and challenging opening fixture for Tony Book's City.

Book's men had other ideas, however.

Driven by the energetic probing of Hartford and Colin Bell in midfield and Rodney Marsh's enigmatic front running, City would run out 4-0 winners, dispatching the Londoners towards London with their tales firmly between their legs. Although he did not manage to score against John Lyall's side, Hartford would collect his first City goal in the next fixture, a 1-0 win v Spurs that saw City head the early season league table. Gelling immediately with the Rolls Royce Bell, Hartford produced a majestic debut performance. It would be the first of many that endeared him to the Kippax faithful during a period of growing influence for Book's side.

By the time Hartford donned the white City away shirt for the fixture at Upton Park at the beginning of the 1982-83 season, he had been back at the club almost a year. Having been shipped out in 1979 during Malcolm Allison's ill-fated clear-out of talent, the Scot had endured a brief but painful stint under Brian Clough's tutelage at Nottingham Forest and a longer and more pleasurable stay at Everton. Returning to Maine Road, he found a new regime under John Bond and a new side, fresh from Cup Final disappointment against Tottenham in the Centenary final. 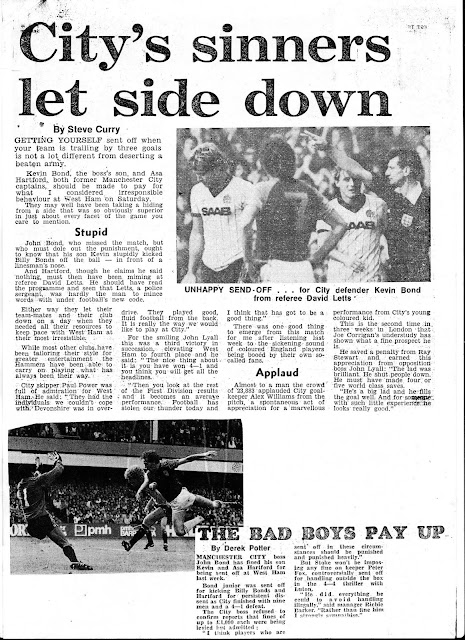 The 1982-83 season would be his penultimate in a City shirt, as City flirted with the upper echelons of the division (2nd after beating Southampton in November), before falling into the bottom three for the very first time on the last day, after succumbing to pressure and to stand-in manager John Benson's play-for-a-draw tactics against Luton Town on the final day. City were relegated and Hartford's slump-shouldered retreat from the Maine Road pitch as supporters flooded the playing surface would be the last time he was seen in the top flight in the sky blue shirt.

The match at Upton Park had taken place in September, however, during a period of the season that City's buoyant form had given few clues as to the disastrous finale in store for us all. In a rumbustious match, City leaked four goals of their own on this occasion and Hartford was sent off along with team mate and manager's son, Kevin Bond. "Getting yourself sent off when your side is already trailing by three goals is not a lot different from deserting a beaten army", suggested Steve Curry helpfully in the Daily Express the following Monday.

In truth Hartford's combative style often lead him into trouble with officials (he had been sent off that pre-season in a summer tournament in Barcelona, characteristically "catching Porto Alegre midfielder Silvio across the forehead with a backhander" after having his shirt pulled. On this occasion it was not so much Hartford's flailing limbs that got the better of him, but his sharp Glaswegian temper, as his fiery reaction to referee David Letts - a police sergeant in real life who brooked no dissent - brought him an immediate dismissal, as City's sudden collapse got the better of him.

The two matches with West Ham represent the full spectrum of what Asa Hartford brought to Manchester City: fire and brimstone, which, when controlled, could move mountains, but when let loose in more volatile circumstances, could have differing results. He finished his time at City in the second tier, hardly fitting for a player, who had worn the sky blue with such ferocious effectiveness throughout 317 highly watchable, fully committed appearances.