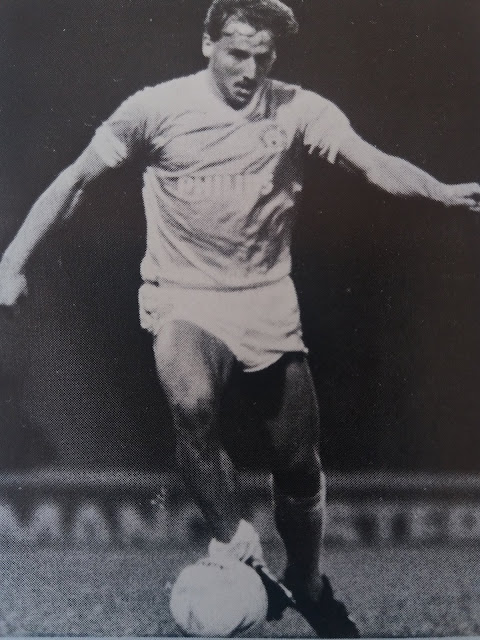 
ROBERT Hopkins had blue blood running through his veins – unfortunately, it was the royal blue of Birmingham, rather than the sky blue of Manchester.

Limited as a player and limited in stature he may have been. But he was certainly the sort any team of the 80s wanted in their trenches. In fact, to those who fleetingly saw him play at Maine Road, they may have decided that Hopkins was actually better suited to that line of work.

The only puzzling aspect to the right-winger's career was why, as a die-hard Birmingham City supporter, he ever signed for despised rivals Aston Villa.

Hopkins himself has admitted that during one of his few first-team games for Villa – away at Notts County – he sported a Birmingham City badge over Villa's crest on his claret jersey. Taking a corner, it was spotted by Villa's away fans who began to hurl abuse at him. Hopkins promptly booted the ball out for a goal kick, flicked them the V-sign and ran off, laughing.

Unsurprisingly, shortly afterwards he signed for his favourite club and linked up with the likes of Tony Coton, Noel Blake, Howard Gayle, Mick Harford and Pat Van Den Hauwe. Inevitably, trouble followed the 'Birmingham Six' – both off and on the pitch.

During one match against Watford, play was halted and a policeman strode onto the pitch towards Hopkins who was being marked by Watford's Kenny Jackett. Hopkins went as white as a sheet but the copper walked past him to tell the match official there had been a bomb threat.

“Thank **** for that,” he said to a startled opponent, “I thought they were coming to arrest me.”

Perhaps Hopkins wasn't ever good enough for Manchester City. It was the first time he had ever lived away from his home-town. Perhaps he couldn't settle.

Certainly, Manchester City never saw the best of him.

Nowadays, Hopkins still attends Birmingham's matches as a supporter. Home and away. He has been inducted into the club's hall of fame, despite a decent, if unspectacular, career.


With respect to his time at Maine Road, it's most likely he was broken-hearted at seeing his lifetime's dreams dashed - being forced to wave goodbye to his beloved club.

In a world of here today, gone tomorrow, badge-kissing mercenaries, surely he should be cut some slack for that.