🏆UEFA's edict earlier this week that the Manchester City-Borussia
Monchengladbach Champions League round of 16 first leg tie should take place in Budapest raised interesting ghosts from the past. 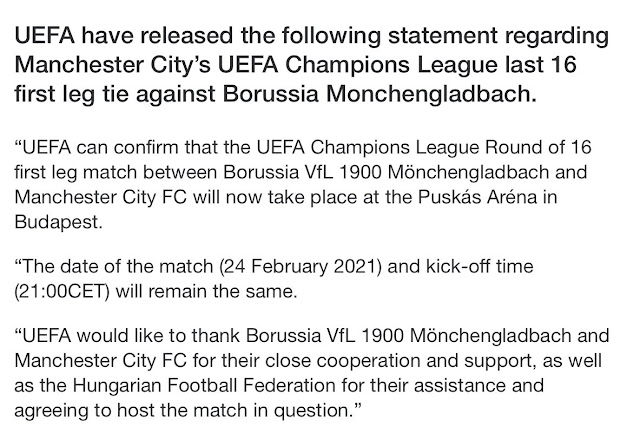 That the tie will take place in the Puskas Arena is apt for a number of reasons and they all involve ex-City supremo Malcolm Allison.

For it was Hungary, and Budapest in particular, and Puskas even more particularly, that pointed the way for the young Allison as he set out to become one of the world game's most innovative thinkers. Having served in the army in Austria and seen the Hungarians train there whilst on tour, Allison was ultra keen to be at Wembley in November 1953 to see the Hungarian national side take on England.

Allison made it to North London that day, along with 105,000 other souls, convinced as they were that England's place as world leaders of the game was not in doubt. Allison had other ideas, however. What the huge crowd witnessed will have surprised them, but not the old West Ham centre half Allison. Having watched Puskas and his team mates Nandor Hidegkuti, Sandor Kocsis and Zoltan Czibor train, he was well aware of what was to come and was certain the self-assured England players were about to come a cropper.

As they warmed up for the Wembley clash, one of Allison's companions (possibly future coach Jimmy Andrews) was moved to laugh at Puskas, whose rotund figure made him look an unlikely sportsman for the occasion. With his shorts pulled high on his belly, he looked for all the world like an overweight spectator who had slipped onto the pitch ahead of the police.

Minutes later Allison's companions had stopped laughing, as Puskas proceeded to trap balls pinged at him at all heights with the ease of a master and to zip them back across the turf with alarming accuracy, pace and spin. This he continued to do during a game since made famous as the moment English haughtiness was given the ice bucket treatment. Hungary won the game 6-3 and a new era of self doubt entered the English national team, a paralysis which, to some, has never properly left it.

It was not just the speed of movement and accuracy of shooting that Allison had noticed, but the ever-changing formation, the easy switching of positions, even the jauntily cut shorts that allowed more movement around the thighs. Everything, from pre match diet, to warm up routine to stylized kit had been adapted to give the visitors an advantage.

Allison would introduce these measures to his City squad as they grew from second division ignominy to a side capable of winning four trophies in three years. His interpretation of what these avant-garde football folk from the East of Europe were doing formed the basis of City’s invigorating passing game that sometimes seemed light years ahead of what other teams were attempting to come up with at the time in the prosaic surroundings of the English First Division.

When his City side was drawn to play the Hungarians of Honved in the 1970 edition of the Cup Winners' Cup at the end of this glorious period of trophy-hunting, there was a pleasant surprise waiting for the City coach in Budapest on the occasion of the first leg.

City’s elegant, accomplished football won them the game easily, despite a close looking 1-0 scoreline. They had been a joy to watch and had vindicated their coach’s adherence, all those years ago, to the virtues of good passing and faultless technique that he had witnessed from Hungary’s national team players. After the match, a Honved official approached Allison to congratulate him for “the best football we have seen from an English side in our country”.

Allison was then escorted to a little restaurant where Puskas’s infamous paunch was said to have been fostered in the early days and to a little house on a back street of the capital with a red chimney pot where the master of Hungarian football had grown up. Despite his defection to Spain, the place had remained a shrine of Hungarian football, filled with trinkets and memorabilia from the great man's career.

Allison was enchanted by this treatment and was later moved to say  “I was entranced by the stories they told me. I could see elements of what they were telling me that were totally alien to English football and its coaching methods.”

At the end of the same decade (1979), Allison's second spell as City manager was coming to a rather less auspicious close, when City were drawn against Borussia Monchengladbach in the UEFA Cup. It would be a tie thrown to the wind by the coach's by now obsessive tinkering. Having disposed of the European experience of Asa Hartford, Brian Kidd  and their ilk, Allison blooded eighteen year old Nicky Reid and briefed him to mark European Footballer of the Year Allan Simonsen. The writing was on the wall after a 1-1 first leg draw at Maine Road and City left the competition in the return at the Bokelberg with their tales firmly between their legs. Reid acquitted himself well enough but it had not been the occasion for experiments.

City had overcome FC Twente, Standard Liege and, more famously, AC Milan on their way to the quarter finals before Allison's return to the club and it would be nearly 25 years before they played in Europe again.

For Allison, Gladbach represented his last hurrah with City in Europe and Budapest represented the bedrock to his opening gambit as a football coach. Both ends of his sparkling, never-dull career are thus dovetailed beautifully by UEFA's decision to house the first leg of this enthralling tie in the Hungarian capital. 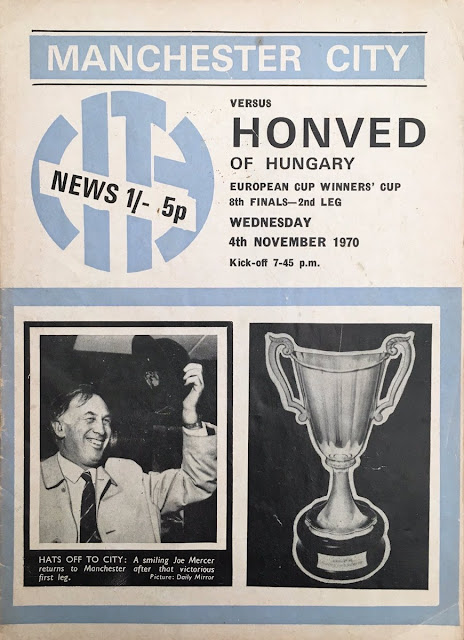