This article first appeared (in sanitized form!) in the Irish Examiner on Monday 8th February 2021

The filmscape for Manchester City’s 128-year history of grim and largely inefficient scrabbling at Anfield has long resembled a particularly bleak scene from a Fritz Lang opus. Inert bodies scattered hither and thither, scores of bent, leafless trees and the clear sound of thousands of people sobbing simultaneously. Was his metaphorical depiction of this painful journey in While the City Sleeps about to undergo a makeover, a City awakening at last?

Myriad shades of grey and puce are enveloped by the unremitting shadows of the unforgiving struggle. What blobs of light can be detected (1981, 2003), they are such tiny pinpricks in the unrelenting gloom as to represent the aftereffects of an old man grinding black pepper onto the surface of the moon from a distance of two kilometres.

City at Anfield has been an inexorable process of decay for many decades, the slow stiffening of limbs (my, what stiff legs you have!), the gradual emptying of the intestines (Oh my goodness, I’m not sure that feels any better) and the draining of blood towards the gravitational low point (I’m afraid I feel a little faint), until all life has left the body and it stiffens to a crisp.

So, let there be light! Redemption! Resurrection! Rise up and convert your chances at the Anfield Road end!

Liverpool, themselves ground down to minute specks themselves by the threefold cogs of injury ill fortune, Herr Klopp’s relentless regime of Gegenpressing and City’s full board Covid-19 staycation in January, were surely there for the taking at last. Pep’s great Mancunian juggernaut, with its tractor tyres and its full tank of diesel, came charging down the East Lancs Road convinced of its moment in time, its place in history, with a thirteen-win run making them look far bigger than they actually are. The Great Avengers, the Righters of Wrongs, the Glory Boys.

The target in sight? A glorious, sweat-stained third win at Anfield since 1981, even depleted as they were by the absence of dual talismen Sergio Aguero and Kevin de Bruyne (who knew amongst the white noise about other absent friends?). City, shorn of the prowess that has produced 200 goal involvements in the last 5 seasons, began cordially and, when offered the opportunity to atone for two penalty misses against Liverpool in the last four matches, they missed again, Ilkay Gundogan following Riyad Mahrez and De Bruyne with his own Diana Ross impersonation.

Hark, though, the clarion call sounding from high on the roof, next to where City’s first half penalty ball still nestled. Brave minds needed, strong legs and nerves of steel. Apply within to Senor Josep Guardiola. The little German, fresh from the double blow of penalty disaster and a second minute reducer from the otherwise peripheral Thiago Alcantara (this was his most meaningful contribution to the game), stormed back into control. Alongside, Bernardo Silva chasing everything down like a Jack Russell on amphetamines, Phil Foden, with the elegance and drive of the child of an 800 metre Olympic champion and Nadia Comaneci, and even little Zinchenko muscling into things with his faultless first touch down the left.

The focus may in time fall on the part played by a hapless Alisson, dinking his way into the assists column with some second half brain clouding, but let nobody forget that it was his counterpart at the other end starting the match with a golden giveaway of his own. The vital difference was the hunger of the bodies chasing those loose balls down. City’s indefatigable chasing outshone Liverpool’s half pace response with Bernardo’s little legs audibly whirring as if driven by some unseen turbine behind the stands.

You could hear other things too in the now customary empty ground. Herr Klopp’s teeth gnashing together, Michael Oliver’s stomach rumbling when finally offered an opportunity to give Liverpool a penalty (he had already infamously offered Leicester three at the Etihad earlier this season) after Salah’s starburst arms persuaded him the gentle touch of Dias was actually the hug of a murderer. A peeping sound was also to be heard, the air escaping from Liverpool’s high-pressure century-old record of massaging City gently back through those Shankly Gates empty-handed. Even the canned crowd sound had been finally and irrevocably switched to Blue Moon for the momentous last act.

Cue bright light, cue the sound of gleeful cheering, cue much cavorting about. Even Fritz Lang would have understood. 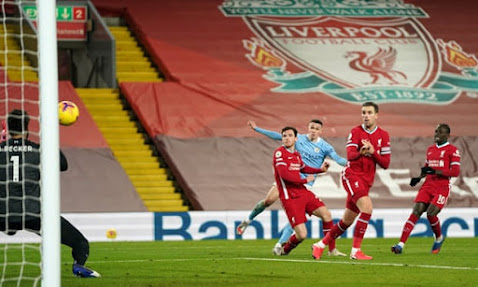