THE POSTURING & THE PREENING OF THE PRE-SEASON FRIENDLY

Sportpark Berg en Bos, Apeldoorn, The Netherlands. It is Sunday 1st August 1993 and I am standing in a wooded area drinking tiny glasses of Grolsch from a wooden kiosk shaped like a clog. It is unlikely - given the size of the measures - and despite my enthusiastic thirst, that my dreams might have included a future City pre-season friendly in the Olympic Stadium in Beijing. Against Manchester United.


But that is where Pre-Season takes us these days. No longer the squally trip over to the Isle of Man to be thwarted by Carlisle United and Oldham, nor the yearly trek to Ireland to get walloped by Celtic in a tiny ground completely stuffed with the raging Irish hoops community. Long gone are the sights and sounds of Bobby McDonald and Peter Bodak breaking curfew in Blackpool for late night skittles. Stockport County no longer quite fit the bill either. 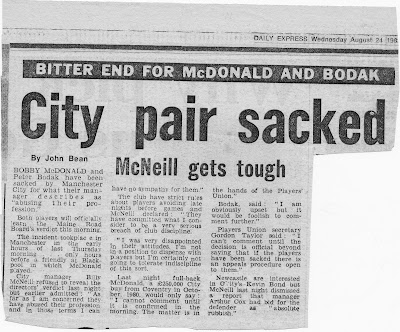 In Apeldoorn that day there might not have been a fixture at all, had I not stopped the driver of the suitably modest bus containing the entire City squad and told him he had gone past the entrance to the "woods" where AGOVV's (for it is they) tidy little stadium lay.

Judging by the phalanx of media, backroom and admin staff that make up the modern City's support army, "not knowing where the ground is" would be one of the least likely scenarios in these highly enlightened times. These days there are well-groomed staff to sort out Google maps on their mobiles before the players have even contemplated their hi-energy bran flakes and early morning press conferences.

Now, where the sun rises iconically over the NRG Stadium in Houston, City and indeed United -- are "giving something back" to the stalwart fans in these far flung parts.

The strange slow-reel world of early pre-season, an odd animal that used to come in flat beige packaging, but now - like a lot of things in football - looks and smells like a giant deluxe Harrods Hamper, is soon to burst upon us again.

Whilst some of the players may look a little portly after one barbecue sausage too many, new signings may still be studying the intricate patterns of the updated club crest (or mulling over the intricate patterns of their thirty-five page contract) and the final result of these early skirmishes may seldom matter (obscured from reality by the 17 second half substitutions and the sight of the Senior Vice-President of NRG getting the second half kicked off), the sun is out and the time has come -if you were unlucky enough to own one in the first place- to slide the lawn mower back into the tool shed and hang up the power drill for another eight months. Manchester City are coming back into our lives.

With the summer warm-up schedule now filled with the exotic (Houston, Texas!), the unfamiliar () and West Ham, concerned people all over the country can start to focus on something other than Teresa May's power vacuum and things that go bang in the night. Nothing quite snaps you out of that lethargic same-old-news torpor than the sight of Yaya Touré snuggled into the sleek lines of this season's brand new kit. A nod, then, to those beautiful unreconstructed days of Apeldoorn and Douglas, Stockport and Edinburgh, before the football juggernaut turned pre-season into something much more than it really is:


HUMIDITY - 7th August 1980, City took on Sporting Lisbon in their old Alvalade Stadium. Having already notched up impressive results in the north, beating Sporting Braga 3-1 and 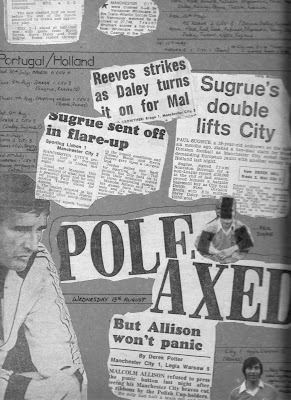 drawing in Porto, they travelled south to play a strong Sporting side. Little were the Portuguese players to know, but some of them would soon be trained by the cigar-smoking manager in the provocatively unzipped Umbro tracksuit top, barking out orders from the sweltering heat of the away bench.

Malcolm Allison would have his Days in the Sun a few months later, leading the green and whites to a well-remembered league and cup double. But for now, more humble pickings beckoned.

The game had been drifting happily City’s way in a solid and professional performance when suddenly local referee Marques Dias sent off Paul Sugrue for retaliation after a rash foul by the Brazilian Ademar. It was more a case of Sporting losing their own composure as City had raced into a 2-0 lead by then in the stiflingly humid conditions, goals from Tommy Booth and Kevin Reeves putting the Blues in a comfortable position.

Although the legendary Jordao pulled one back for the home side, the Blues held on to win 2-1. City would come home and lose 5-1 at Maine Road to Legia Warsaw on the eve of the season, a result and performance which acted as a much more detailed pointer to what we were about to be treated to that season. Big Mal lasted until October when he was sacked with City bottom of the table. He would fare considerably better when taking over Sporting.

HEAT - Two years later City headed for Barcelona and a prestigious tournament that also featured Cologne, Porto Alegre and the hosts, newly boosted by the arrival of Diego Armando Maradona. In the first game, a semi-final of sorts, City were paired with the Germans and held them 1-1 thanks to a fine display by Joe Corrigan and a goal from Dennis Tueart after Paul Power’s shot had been deflected.

Cologne’s late equaliser meant penalties and City held their nerve to advance to the final 8-7 on spot-kicks, Corrigan saving twice when the shoot-out went to sudden death. City thought that this would set them up nicely for a final with Maradona’s Barcelona and a certain 120,000 sell out crowd, all eager to see their new recruit from Boca Juniors, but the hosts were beaten by Porto Alegre and City also succumbed to the Brazilians in the final (1-3). Still there were 90,000 in the ground as Asa Hartford was dismissed for throwing a punch and a David Cross consolation goal was too late to stop the samba party. City finished runners-up in a tournament watched by more than 160,000 fans over the two days. The Blues went home to prepare for kick off in a season that would see them 2nd in November and relegated in May.

OLD FRIENDS - The following year, City were preparing for their first season out of the top flight for 17 years and took it upon themselves to undergo a pre-season tour through central Germany, playing such luminaries as Eppingheimer FC, Pfingstad, Vfr08 Osterode and Silksheimer FC. It was a tour organised to help Billy McNeil bed in his new cut price Scottish signings Neil McNab, Derek Parlane and Jim Tolmie and how they re-paid their manager’s faith.

Having scored four against each of these amateur sides, City took the run further by knocking in six against the one team from a slightly more elevated level, VfL Wolfsburg. Although they were not the established Bundesliga club they are today, Wolfsburg represented a greater challenge for Billy McNeil’s new charges than the sides they had met up to that point.

Goals from Kevin Bond (penalty), Tolmie, Power and Caton enabled City to run up a comfortable half time score, with two more in the second half from Parlane and Gary Jackson completing the rout. City would also win in Tilburg in Holland on the way home before starting the second division campaign with a great win at Crystal Palace on the opening day. From these early moments it was clear that the big Scot had spent what little money the parsimonious Peter Swales had given him wisely. The new recruits would play their part in the build-up to eventual promotion a season later. 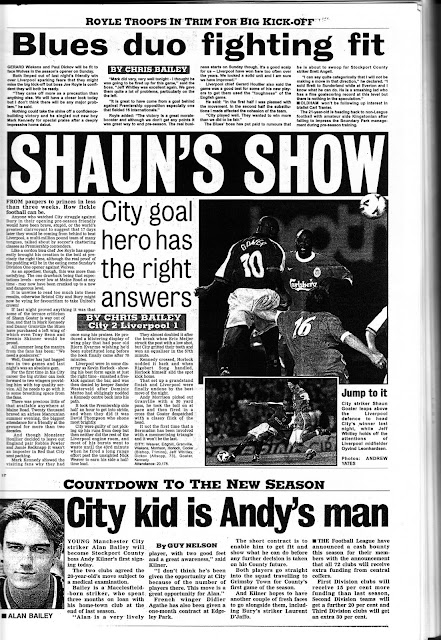 GOATS - Although the magic of pre-season to many is the opportunity of a trip abroad to follow the Blues whilst enjoying a well earned summer holiday, there have been one or two memorable games closer to home, as City’s policy of playing more games in Britain and Ireland came to the fore in the mid to late 90s. In 1999 the build-up involved a home win over Liverpool.

Coming on the back of inept showings at Bury and Bristol City it was as unexpected as it was emphatic. As Chris Bailey wrote in the Evening News, “...like a cordon bleu chef, Joe Royle has apparently brought his creation to the boil at just the right time...”. David Thompson’s long range effort gave Liverpool the lead, but City hit back with a penalty from Kevin Horlock and a late header by Shaun Goater After the traumatic season in the third tier, the result helped provoke great excitement amongst Blues fans and lofty dreams were realised as Joe Royle’s terriers shot straight through the first division like a dose of salts to gain a second successive promotion.

A year later, pre-season saw City fans in an advanced state of delirium as the side prepared for re-entry to the Premier League. The unforgettable afternoon at Ewood Park, where City had clinched promotion in a fashion only City could manage, was still fresh in the memory as the Blues announced their new summer signings: George Weah and Paolo Wanchope. Two years earlier it had been Danny Tiatto. 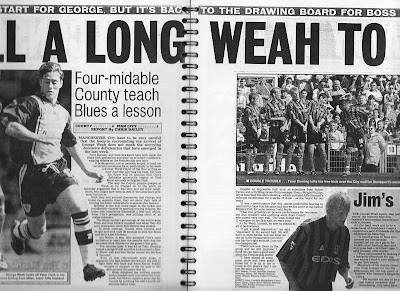 This wholly unexpected development produced a big turnout at Boundary Park to see the Blues beat Oldham. Weah slotted his 2nd in two games, the other a consolation effort in a 4-1 drubbing at Stockport, leaving the Liberian with interesting ideas about what the season itself would look like. He would see only the early weeks, replaced upfront by the not-particulalry-mobile Egil Ostenstad as City headed straight for the trap door.

Since the move from Maine Road, Barcelona, Valencia, Olympiakos, Porto and their like have been seen strutting onto the manicured pitch. Clashes with Inter in the U.S. and Arsenal in China fit snugly with the club's new image alongside the exalted elite of football, but never let us forget the lessons of pre-seasons past. Go out for unauthorised skittles and you'll end up regretting it.

Posted by Simon Curtis at 4:08 AM 4 comments: Links to this post