BANANAS ARE NOT THE ONLY FRUIT

I gave my inflatable banana away to a Dutch girl called Saskia, who seemed to be both passionately in love with AC Milan (Gullit, Rijkaard and The Other Fellow were there at the time) and on the point of perhaps considering shedding some of the flimsier items she was wearing at the time. In a fit of true stupidity and (possibly) overcome by a bubbling tsunami of hormones, I handed it over to her, fully inflated. It was late at night. We were in her flat. I had delivered all the lines about literature and philosophy, about the environment and adventure. I had dropped the names of Johnny Rep and Johan Neeskens into the conversation and said politely positive things about Queen Beatrix and her concrete hair. I had bought dinner and not hogged the wine too much, but still she was completely, utterly, fully dressed.

A fully inflated banana.I know what made me do it and all I can say is, all these years later, I feel dirty, shallow and ever so slightly feeble. I want my banana back.

I will never see it again. I bought it somewhere down the side of the Arndale Centre, as you do. Or at least, as you did. I took it out of its package, feeling like a prize plum, and self-consciously gave a tug on its nipple (yes, I know). I had never tried to blow a banana up in central Manchester before. Even the Jacket Potato Man gave me a funny look and I had become quite used to our relationship being completely the other way round. Me: striding past confidently, humming New Order, fairly snazzy shoes, hair dancing and prancing. Jacket Potato Man: listless slightly slimy hair, joke jacket, Thompson Twins on his radio, stuck in a flourescent 4be4 caravan in the middle of the pedestrian zone with his baked beans filling going crispy because the heat on his calor gas burner wasn't properly regulated. Health + Safety would have taken one look at him and towed him away to Runcorn, where Jacket Potato Caravans go to rest. 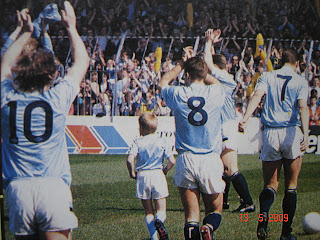 On a good day he would have a trail of fat lasses on their healthy option day out, slapping their tats with mustard, mayo and ketchup. He'd be active then, parping out the sauce for those flabby armed girls who needed assistance, jumping forward with those pathetic little wooden forklets that you couldn't stab an ant with. "Here girl, grab this in your sausage-shaped fingers and try eating my scolding hot tat, dripping with colourless gravy and scorched beans whilst tottering down to M+S in a howling gale." I used to think the whole things was hilarious. The lasses would have volcanic hot flavourless brown gunk down their boobtubes before they'd even got as far as HMV.

But now he was smirking at me, with his bean stained pinny and his sweaty armpits. I gave it a yank and blew. Up it came like a flower in spring. You have to understand that Manchester in the 80s allowed this sort of thing to happen without a full scale riot and scorching of King Street's shirt shops. Morrissey was busy with his gladioli, there were jerks in jumpers everywhere, New Romantics with ruffs and puffed trousers looked like effete pirates who had pooed their pants. All in all, the scene was ready for bananas. And swimming pools. And fried eggs. And T-Rexes. It was about to get right out of hand.

And how we gave them bananas. My God. I may have felt like a prize Jeremy Clarkson in front of the Arndale with my yellow accomplice that day, but the nearer you got to the ground, the more obvious it got that you were in fact part of a vanguard of hipsters bringing something fresh and new to 80s football, a thing - don't forget - so shop soiled, it was ripe for the tip. Football hooligans had moved on from biff and bosh to rip and shred, casuals were all around, the glint of cold steel, the snide question "where you from, mate?", the little feral packs of spotty aces breathing down your neck on the way to the game.

I remember the rainswept scene down Claremont Road before the second division game with Chelsea, a big top of the table clash, with 40,000 expected and a heap of trouble to boot. Mad packs of scavenging hyenas everywhere you looked. Rain sleeting down, that slate grey vista all the way down Lloyd Street, with the coppers on horseback and the Pink Final man shouting his dues. An atmosphere of malevolent calm hanging over the place, as Maine Road cranked itself up for another of those steaming dripping bad-tempered second divison afternoons out. The distant clipped roar of the Chelsea mob floated over the top of the square riggged North Stand architecture, a set of plastic and corrugated iron struts that must have been chic at one point or another.

Once inside the ground, the threat of violence evaporated and the quality of football on show allowed you all the time in the world to wallow in the stunning visual effect of thousands of inflatables waging war on each other across the ground. It started at Oldham, took off at the Hawthorns with an unseemly scrap between a dinosaur and a giant cigarette, soon attracted paddling pools and six foot snakes and had its finest moment at the Victoria Ground where 12,000 City fans turned up in fancy dress clutching every kind of inflatable known to man. Naturally, City lost 3-1. There was also a home game (Leicester in the cup?) where the players emerged from the tunnel with a banana each, which were hurled into the Kippax. I well remember Ian Brightwell had chosen to carry a five foot banana instead of the "normal" ones and he looked like it was carrying him. Halcyon Days, indeed. Here are a couple of sharp memories from the era: http://www.mancityfans.net


I also had rhino which the filth took off me at Watford, a game I seem to remember we lost 2-0."

I remember the Banana being at the Plymouth Game, first of the season in 1987/8. We won 2-1 with Stewart and Varadi scoring I think in a late comeback and the "Big Banana" - the 5 foot type - was in the old Windy Corner between the Kippax and North Stands, later to become one of the Gene Kelly's. I am assuming this must have been Frank Newton.

At a time when the whole country is sitting up and taking notice and the football family is at last taking dear daft old Manchester City seriously, it might be worth remembering how we got this far without going completely nuts: what drove us to carry these things under our arms at a time when the rest of the country were chasing each other with carpet knives, where Blue Moon comes from, and the Invisible Man.

You have to laugh, and if at all possible, the best place to start is with yourself.